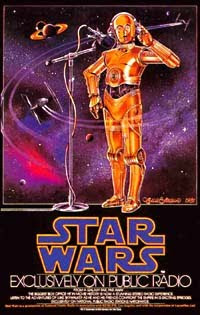 A year after "The Empire Strikes Back" hit theaters (and four years after the original, source film), the radio adaptation of "Star Wars" landed on NPR radio. I honestly can't remember when/how I learned about it. In 1981, the Houston NPR station was a jazz station and neither my parents nor I listened to jazz. Nonetheless, after locating the station (88.7 KUHF), I tuned in for the first of thirteen (!) half-hour episodes retelling the events of A New Hope.

Even a seventh-grader could do the math: a two-hour film expanded into a nearly six hour radio drama, there was going to be a lot of extra material. As one groomed on all the little details of the Star Wars Universe, I soaked it all up. And, from the get-go, I taped the episodes from the radio so I could listen to them over and over. I still have those tapes but, recently, when I wanted to re-listen to the Star Wars Radio Drama again, I bought the version from Audible. As much as I enjoyed the episodes back in 1981, I think I enjoyed them more now.

Brian Daley, author of the original Han Solo trilogy, wrote the script. Future Oscar-nominated director John Madden (Shakespeare in Love) directed the cast which included Mark Hamill and Anthony Daniels reprising their roles from the film. Perry King was Han Solo, Ann Sachs was Princess Leia, and Brock Peters was Darth Vader. In the present day, where George Lucas and Lucasfilm keeps a close reign on everything related to Star Wars, Daley was given all but carte blanche to add material. And add he did. In many ways, the radio drama is more fulfilling than that which appeared on screen.

Each episode opens with the narrator setting the scene. Once that's over, it's all dialogue, original sound effects, and music, just like old radio dramas before television. There would often be times where Daley would have to write some dialogue that allowed a character to describe something (like when Luke and Threepio spy on the Tuskin Raiders). The good thing about it being Star Wars is that most listeners knew how the films and Daley didn't have to work too hard to make these scenes feel natural. Unlike other children at that time, I was pretty familiar with old time radio. My parents had loads of cassettes and I understood the concept pretty well. There was many a vacation where I'd listen to The Lone Ranger, Sherlock Holmes, or The Shadow for the entire trip.

Star Wars was different. Episode 1, "A Wind to Shape the Stars," was, and still is, my favorite episode. Back in the day, I had to dub this episode to a second tape since I all but wore it out. It tells the story of Luke Skywalker right before the scenes we see in the opening credits, the great battle between Vader Star Destroyer and Leia's blockade runner. Basically, this episode is the lost scenes from the film with Luke and his best friend, Biggs Darklighter, home from the academy. I knew of these scenes since they were in the novelization and the comic adaptation. We get a sense that Luke is an outsider to the other young people in Anchorhead. He feels trapped and without a true friend, something I could relate to back in 1981. There's a race between Luke and Fixer (voiced by Adam Arkin), and some poignant moments between Biggs and Luke as Biggs tells Luke about joining the Rebel Alliance “in case I don’t come back.” Listening to it again, as an adult, it still speaks to me.

Episode 2, "Points of Origin," show Leia, on her home world, verbally jousting with an Imperial lord who'd like nothing better than to marry Leia. These early episodes show how she intercepted the stolen Death Star plans and how See-Threepio and Artoo Detoo came to be in her service. Once the events of the movie starts, it pretty straight-forward, with many nuances thrown in mainly because there's time for them. Among the highlights not seen in the film are the following:

-How Vader tortured Leia into revealing the location of the Rebel base.
-More bickering between the Imperials on how best to use the Death Star. Since the Emperor was revealed in the film of Empire Strikes Back, he's written into this drama, adding greater context to the entire universe.
-How Kenobi found Chewbacca and made the deal with Solo. If you remember the Special Editions, you'll remember the scene with Jabba the Hutt that was filmed in 1976 but never used. That scene is back in with one major exception. Lucas must have told Daley that Jabba was a slug (he's humanoid in the original). Thus, Daley invented Heater, Jabba's #2, a humanoid. It's Heater that Han spars with. The dialogue is almost exactly as Lucas wrote in the original screenplay.
-Just how close Han came to abandoning Leia and Luke and the droids while escaping the Death Star.
-How overtly mercenary Han really was after landing on Yavin and how Leia and Luke both tried to convince him to help.

All the non-film actors did a good job. The one that stood out the most for me was Brock Peters as Vader. In the movies, Vader is this cool, calm guy who rarely raises his voice to get his point across. Not so on radio. Peters does Vader as the truly angry person he really is. In his torture scenes with Leia, he's all but screaming at her. It's very effective and I found I enjoyed it a little bit more than James Earl Jones's delivery.

In the years since its airing, the Star Wars radio drama has attained canon status in the Expanded Universe. I thoroughly enjoyed it this spring when I listened to it again as much as I did back in 1981. It's well worth the six-hours it'll take you to listen to it.
at May 25, 2010
Email ThisBlogThis!Share to TwitterShare to FacebookShare to Pinterest
Labels: Star Wars

I remember this. I listened to almost every episode when I was 14. I learned about it from ads in the Marvel Star Wars comic -- I had a subscription. My station went from this to playing a great Lord of the Rings radio drama which I think nearly lasted a year.

I had absolutely no idea.

I remember it well, and somewhere around here I still have - I hope - those cassettes of it I recorded off the air, juts like you did. Thanks for the memories.

I just requested all three radio dramas from the library. I can't wait.

I never heard the radio broadcasts, but I do have the published scripts.

I never knew about this, but it sounds interesting.

Hello Scott, I really enjoyed reading your post about this old series. I bought the set on CD recently so my 5 year old and I could listen to them at bedtime (an incentive). It was magical back then wasn't it? It was also a wonderful surprise, listening to episode 1 last night, to hear the origin of a strange line of dialogue that I put into my own home-made comic. (now online) I'd never been able to place it!

Amazing too, that so much of this sounded familiar - after 30-odd years!

Hi Scott, just wanted to say thanks for the well written trip down my childhood memory lane! I too recorded Empire off the air onto cassette on one of those old Boom Boxes of the era (Realistic SCR-2)while listening to it in the pitch black in my closet so that I could hear it because my old man used to blast the TV and the sound would travel all so well down the hall and so I had to block that noise out! Never heard Star Wars "over the air", however, a friend of mine's parents had bought (at $5 bucks a cassette) some extremely good "bootleg" recordings that an employee at the local NPR radio station in the foothills of South Carolina had made on, of all things, Scotch Brand (the very same brand of tape Ben Burtt used to record the sound effects on reel to reel)audio cassette tape, and I later used my 1985 Radio Shack(13-1219)Realistic Clarinette's 115 double tape deck to copy. Cassette one (Episodes 1 & 2) was also one of my favorites. I left home after High School in 89 and joined the Army and afterwards moved to Florida. I never returned home (expected once in 97 when my Mom past away) and I was never able to find those cassettes again. Ironic, the last gift my mother ever got for me was "Jedi" on cassette when it came out. Years later in 93 I bought the Highbridge CD's of course, and I even took them to Star Wars Celebration V here in Orlando and got Ben Burtt to sign them. But those CD's will never replace the memories and the magic of those old home recorded cassette tapes.