Before We Die: Season 2 Review 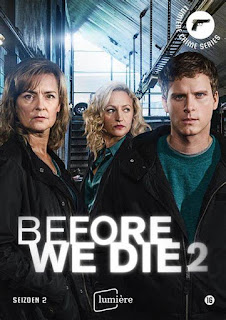 One of the standard guiding principles for second seasons of TV shows is the same but bigger. That principle is alive and well in season two of Sweden’s Before We Die.
After finishing season one last week, the wife and I decided to forge ahead with the second season without taking a break. At only eight episodes (to the first season’s ten), it wasn’t difficult to watch the entire season by Thanksgiving night.

Season two picks up six months after season one ends. Hanna (Marie Richardson) has taken down the Mimica crime family a few notches—they went from running a fancy restaurant to a pizzeria—but she still doesn’t know the identity of the police officer who works directly for the Mimicas. To ferret out the leak, Hanna’s boss assigns her to the Organized Crime division. There, she and her partner, Bjorn (Magnus Krepper) stumble upon a group of corrupt cops dubbed The Circle. These folks are pretty darn bad, killing and stealing at will, all with a diffuse organization not easy to discover and even harder to bring down.

All of this would be difficult enough, but throw in the return of Christian, Hanna’s son, from his exile at the end of season one, and you get another complication. That is, until Bjorn and Hanna decide to let Christian try and infiltrate the Circle. He didn’t come back with Blanka, the daughter of the Mimicas, and he doesn’t want to talk about what happened down in Costa Rica.

Now, I’ll admit that as soon as the plot became another infiltration by Christian into a dangerous group, I was a little irritated. We had already seen this kind of thing in the first season. And some of the scenes between Christian and Hanna, Bjorn, and the police captain were just as irritating. “We should bring him in, get him out,” they’d say. “No, I’m really close,” Christian would counter. And then he’d go back. But the ingredients in this story were just different enough that I quickly moved past my difficulties and just went with the flow. It didn’t help that in the Twitter posts from last week (about season one) a user commented that the second season wasn’t as good as the first. True, but it was different enough to stand on its own.

You see, Christian infiltrates the Circle really, really well. Lena (Maria Sundbom) takes a shine to the young man and things get hot. Yet he has to keep this aspect of things secret from his mom and the other cops, so you end up having the young man (Adam Pålsson) alone playing all sides. Palsson does a good job here, especially considering the other things the character is fighting.

Second seasons always bring in new characters and one of the best is Laura (Shada-Helin Sulhav) as one of the Mimica’s foot soldiers. Laura is cold, calculating, imaginative, and resourceful in her quest to do what’s asked of her. My wife and I both hated the character…which just meant it was an excellent one. Laura’s primary goal is to befriend Blanka, who has returned to Stockholm and is looking for Christian.

If there is a plot point that was irritating—and I mean Kim Bauer in “24” getting caught by that mountain lion irritating—it’s Blanka befriending Laura. It’s smack-your-head stupid, but hey, whatever.

What really holds Before We Die together are the relationships and the push/pull each have against the larger story. It’s fun to see just how far each one is willing to go to achieve a goal.

There's another couple of scenes in which the characters speak English. Having spent so long reading the sub-titles, it was a fun surprise to realize "Oh, I understand that." Which brings up an interesting question: why English? Is English always the default second language for most of the rest of the world?

Oh, and do yourself a favor: don’t look this season up on IMDB or whatever. Just leave yourself open to the show as it unfolds out over eight hours. We did that and the surprises—almost always in the last thirty seconds of each episode—will be that much better.

Season two of Before We Die doesn’t quite reach the level of the first season, but, taken together as one long 18-hour story, it’s still highly recommended.

You have me intrigued, Scott. I will remmber this show if the Mrs and I are doing that endless Netflix/Prime bop where you spend all the time scanning for something and then don't watch anything. And I do like shows that last less than ten episodes. The quality just seems higher, more disciplined.

Hey Scott, big fan of 'Before We Die' and I was curious after watching season 1 how many seasons of the show were made, so getting the rundown of season 2 from you was awesome and I can't wait to watch it. For some reason I have a love hate relationship with the characters on the show. I really did want the "bad" guys to win in season 1 just because I felt Hanna, her son and the rest of the "good" guys were often emotional in how to go about handling a situation: one step forward, two steps back mentality. Didn't you find Christian's breakdown annoying afterwards...I did! Though it kept me going, so I'll definitely be watching season 2 etc etc....SCOTT, check out 'No Second Chances' from France that's another good one and 'The Unforgotten' from the U.K., both are excellent shows from across the pond!