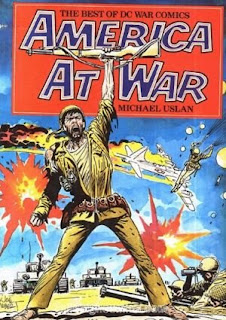 Those headlines are not true, of course, but you could believe it if you only read the war-related titles from DC Comics. And some of the finest are collected in 1979’s “America At War: The Best of DC War Comics,” edited by Michael Uslan. What’s ironic is that this anthology emerged at the twilight of the great war comics. Just a few years after its publication, the comics this anthology touts would fade to memory.

Uslan offers a nice introduction giving a brief history of war comics from DC. He points out that in 1939, DC published a new book, All-American Comics, that featured Hop Harrigan, America’s Ace of the Airway and Red, White, and Blue. What’s fascinating is that the cover and lead story featured the original Green Lantern. The editors at DC didn’t know if the books would sell if outright war characters graced the covers. They soon found their answer. Harrigan became an instant hit, eventually spawning his own radio show.

Even in the early years of World War II when America was not at war, we knew who the enemies were: the Germans and the Japanese. And the stories and featured characters—Blackhawk, The Boy Commandos, etc.—started fighting America’s true enemies rather than spies on the home front. But after V-J and V-E day, in real life, our soldiers returned home. In the comics world, they kept fighting. And, in 1952, DC issued its first all-war title, Our Army at War. Its success spawned more and more, eventually giving birth to Sgt. Rock of Easy Company, Gravedigger, The Haunted Tank, and the Unknown Soldier. Even through the divisive Vietnam years, war comics thrived mainly, I think, because they focused on the “good war” of WWII and, occasionally, Korea.

Uslan highlights many of these characters in his nice anthology. He makes his apologies in the forward stating that he’d selected nearly 600 pages of war comics that he had to edit down to 250. That must have been agonizing. As such, we get mere tastes of these titles and characters, enough to whet our appetite and cause those who like this material to seek out and find old issues or reprint editions.

The book is divided into decades, starting with the 1940s and ending in the 1970s. The 1940s offerings showcase Blackhawk and his origin story (he was a crack pilot who was shot down over Poland only to discover his family had perished), the Boy Commandos (created by Jack Kirby), Hop Harrigan, and a couple of Superman stories. The funniest piece here is the day Superman failed his Army physical. Originally published as a newspaper comic strip, Clark Kent is the perfect candidate for a soldier except he flubs his eye test. You see, his X-Ray vision caused him to read the chart in the next room, not the room in which he currently stood. Humorous. Later the same year (1943), however, in the comic book version of Superman, Kent goes undercover in the Army Air Force to dispel the rumor that the training program is too timid. It’s subtle propaganda but propaganda nonetheless.

The 1950s is where the real action begins. And there was no hero larger in DC war comics than Sgt. Rock. Uslan doesn’t include Rock’s first appearance. Rather, he includes the first time artist Joe Kubert illustrated one of Rock’s stories. Kubert is, by definition, one of the best artists out there and his take on Rock and other war comics are all but definitive. In this issue, a new member joins Easy Co. and questions why Rock is called “Rock.” One answer is this: “’Cause that what he is. ‘Cause when the goin’ gets so rugged that only a rock could stand, he stands.” On a different level is Gunner and Sarge in the Pacific. This story has Gunner temporarily blinded and, with the help of a “seeing eye dog,” takes out a tank and saves Sarge. We jump back to Europe and follow an adventure with Mademoiselle Marie of the French Resistance. It’s during the 1950s where my favorite illustrated word—the words like “Pow” and “Bang” to denote some action—comes into its own: “Budda budda” is the written method to characterize machine gun fire. Heck, I still make that sound.

The stories from the 1960s demonstrate a wider range of creativity and, frankly, bizarreness. Uslan includes the first Haunted Tank story. In this one, the ghost of Confederate general J.E.B. Stuart watches over a light tank commanded by one of his descendants, Jeb Stuart. At key moments in his battles, the ghost Stuart renders aid to the tank commander Stuart, usually with a happy ending. The key is that Jeb Stuart is the only one who can hear the ghost. Enemy Ace does a 180-degree turn, spotlighting a World War I German flying ace instead of the usual American characters. “What the Color of Your Blood” is a 1965 Sgt. Rock tale that speaks to the civil rights movement of the time. Having been captured by Nazis, a black American soldier fights a white Nazi with the Nazi trying to force Jackie (Robinson?) to say that his blood was black. Only in the end, when Jackie offers his own blood in a transfusion to save the German’s life does the Nazi man see the color of Jackie’s blood. Uslan includes one story from the 1960s—where a PT boat comes face to face with dinosaurs (yeah, really)—that would eventually become Weird War Tales. We get one Vietnam-era story from 1966 before the nature of the war changed. It’s a straight-up tale featuring Capt. Hunter.

Tellingly, there is a break in the chronology from 1966 to 1971, the height of the Vietnam-era protests. Uslan’s first 1970s story is “The Glory Boys,” a Civil War-era story that speaks directly at the less-heroic and yet tragic nature of war. By 1971, the horrific stories to emerge from Vietnam—My Lai, the mentality that our soldiers had to destroy the town to save it—spilled into Sgt. Rock stories. In “Head Count,” a soldier named Johnny Doe loves to kill, and forces Rock to an agonizing choice. The last panel includes two things. A closing quote from Rock and a little seal that states “Make war no more.” Rock’s last line of dialogue echoes the sentiments of that seal: “Was Johnny Doe a murderer—or a hero? That’s one question each of you will have to decide for yourselves.” Lastly, Uslan includes one of the best war titles from DC, an Unknown Soldier story. An American soldier, whose face is so severely burned that he goes around with bandages on his head, becomes an indispensable spy specializing in disguise and stealth. In “8,000 to One,” the Unknown Soldier infiltrates the Gestapo in order to sabotage the Nazi plans to transport 8,000 Jews to a concentration camp. The Unknown Soldier must confront the inequities of war that force men to choose one life over another.

As I mentioned earlier, in the 1980s, the war comics just withered and died. The last issue of the Unknown Soldier hit the newsstands in October 1982. The following summer, Weird War Tales—which showcased one of the coolest creations in the 1980s, the Creature Commandos (think Frankenstein, Dracula, a werewolf, and a robot fighting the Nazis)—ceased publication. G.I. Combat, the only war title to get DC’s Dollar-sized issue treatment, lasted until March 1987. As you would expect, Sgt. Rock outlasted them all until, in July 1988, he, too, faded into history.

The irony in the death of war comics is that they died when new found realism invaded the superhero comics. With The Dark Knight Returns (1986), Watchmen (1986-87), and others, comics and graphic novels became less the entertainment of the young and more an art form equal to novels. This type of medium would seem to have been a suitable outlet for more adult war stories. You could have even tagged the books with a “Intended for Mature Audiences” label like the one-off issue of Weird War Tales in 1998. And, yet, it hasn’t come to pass. I just wonder why it happened.

In recent years, Sgt. Rock, Blackhawk, Enemy Ace, the Unknown Soldier, and others are getting the archive treatment from DC so we’ll have nice hardbound versions to keep and re-read. But if you want a nice anthology that you can dip into and read a little bit of everything, you can’t go wrong with Michael Uslan’s “America at War.”
at October 10, 2008
Email ThisBlogThis!Share to TwitterShare to FacebookShare to Pinterest
Labels: Friday's Forgotten Books

Sadly, the only war comic series that I can recall hitting the shores of the UK was Blackhawk - but even those dealt more with the Korean War. There was even a Blackhawk colouring book.
Hopefully, our Forbidden Planet comic store will stock these anthologies then I can buy them for my sons - but read them myself.

I've got a book called The Mammoth Book of Best Crime Comics (edited by Paul Gravett) sitting in my TBR Scott. I haven't read any comics since I was a child, so I'm not sure whether I will like it or not. It's due to go back to the library soon, so I guess I will have to take the plunge.
Thanks for dropping by my blog

We used to have Sgt Rock comics in the stores when I was a kid. I liked those.

Actually instead of the pricey hardcovers. DC with its Showcase line is reprinting all their old war comics. With a Enemy Ace in one handy volume, Sgt Rock, The War That Time Forgot, Haunted Tank, and Unknown Soldier. Now only if they could clear up those Jonah Hex issues and put out a second volume already.

Boy, that is good to know. I just hadn't seen those volumes yet. My library stocks the superhero ones. Now to lobby for the classic war stories. Thanks for the tip.