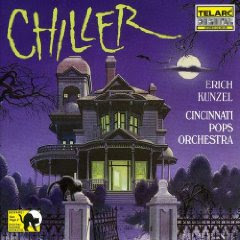 Mozart never made a concept record. And, no, I don’t count opera. It wasn’t until the 1800s that music took the natural next step and created a sonic landscape with a unified story or theme. A concept record before there were even records.

What am I getting at? Program music—that is, music with the intended purpose of creating images in a listener’s mind—didn’t flourish until the Romantic Period in the 1800s. And it wasn’t long before music evoking a pastoral landscape gave way to things that scared us: demons, witches, and death. Often referred to as tone poems, some of the best are collected in the 1989 CD “Chiller,” by Erich Kunzel and the Cincinnati Pops Orchestra.

Kunzel has made a niche market of popular music from movies being recorded and packaged together to go with a common theme. “Round-Up” features western music, “Star Tracks II” showcases some great themes from science fiction films, while “William Tell and Other Favorite Overtures” shore up the usual pops orchestra material. So it was not long before they tackled the music of the macabre.

One of the fun things on a Kunzel CD is the sound effects. “Round-Up” begins with sounds around a campfire. The CD that includes music from “Jurassic Park” starts off with the sounds of a T-Rex stomping through the forest. So, as you can expect, “Chiller” starts off with a scream. A very loud scream. You hear thunder and rain, a mewing cat, and footsteps running—natch—up some wooden steps. Three knocks of the door knocker boom and the door creaks open. The woman, so happy that some is home, turns to look at the…thing in the doorway and screams. The thing screams back. The short piece ends with the door slamming shut and immediately, the opening to the Andrew Lloyd Rice’s “Phantom of the Opera” kicks in, the pipe organ played to full volume. It really starts things off with a bang.

After the Phantom has left the stage, the remainder of the CD’s first half (time wise; these are long pieces) meanders through the great supernaturally-themed orchestral pieces from the 19th Century. All the great ones are here save one. “Night on Bald Mountain” blows through your speakers with its accustomed ferocity. You hear the intense string line flurrying around and, then, suddenly, the thunder of the low brass bolts from the sky. Having played this piece before, it never gets old.

My personal favorite supernatural piece of music is Saint-Saens’ “Danse Macabre.” Musically, you hear night fall and the dead rise, led by Death sawing through his violin concerto as the dead dance. Kunzel and the orchestra nail this reading of the piece, bringing forth all the innuendos of the instruments: xylophone as dancing bones, harps tolling midnight, the oboe as rooster, among others. This piece just floats along and, man, you can just see (dead people) the skeletons and ghouls prancing in the graveyard and over the tombstones. It all climaxes in a fantastic melding of two scales, one ascending and one descending, being played over each other. Just like when you turn up the volume on your car radio when you hear “Hotel California,” I always crank up the volume when these scales do their thing. And then it all ends at dawn.

The rest of the classical music includes two pieces from Berlioz (“March to the Scaffold” and “Pandemonium”) and Greig’s “In the Hall of the Mountain King” from Peer Gynt, a piece that can always leave you panting. The one piece whose inclusion would have made this CD perfect is Paul Dukas’s “The Sorcerer's Apprentice.” You’ll have to get it elsewhere. “Classics from the Crypt” includes it as a few other pieces not on this CD. I have both and pretty well have all the great supernatural orchestral pieces out there.

The second half of “Chiller” is a let-down after the spectacular music from the 19th Century. It’s film music from the 20th Century. None of it is bad, it just suffers when compared to the older music. Moreover, the carefully-crafted mood evoked by the classical music is broken with happier-sounding material like the overture to the movie “Sleuth” or the theme to the movie “Without a Clue.” If I had selected the music for this disc, I would have included more pieces like the Herrmann music from “Psycho,” complete with the exact sound effect you’d expect from the famous murder scene. The theme from “The Bride of Frankenstein” does its job well, bringing to mind all the fantastic images from that horror film of that era.

The fact that there are images associated with the film music is why I enjoy the older tone poems better: they were intended to stir up in the listener images of their own imagination. Film music, by its very nature, compliments eerie pictures on a silver screen. There’s nothing wrong with that. Some great music is out there to correspond to some great horror films: the theme to the movie “Halloween,” for example, or the music from “Silence of the Lambs.” But so much horror film music is best experienced within the context of the film. The classical music on “Chiller” is of itself and the images are entirely yours. Yeah, I’ll admit that I can’t listen to “Night on Bald Mountain” and not think of the demon from “Fantasia” but that’s the exception (and, oh boy, what an exception!).

What made these concept classical pieces of the 19th Century so compelling was that we, as humans, didn’t know as much as we 21st Century citizens know. With our ultra modern lifestyle, we can keep the supernatural at bay more easily than we used to. Heck, we keep nature at bay, as well. To some extent, with greater scientific knowledge comes with it a greater understanding that supernatural things our ancestors were scared of are merely figments of our collective imaginations. Death doesn’t rise from the grave and play a violin. There is no supernatural witches’ Sabbath. With nature largely conquered in the western world, the things that scare us are falling stocks, serial killers, terrorism, or bio-warfare, things all man-made. We don’t get scared at the supernatural anymore.

Which is why “Chiller” is such a wonderful CD. With the classical pieces included here, you can get a sense of the frightening wonderment audiences experienced two centuries ago in the concert halls. After an 1870s concert featuring “Danse Macabre,” I can imagine a few folks looking around shadowed corners as they walked home or rode in carriages. Horror films do the trick for us nowadays but there’s a part of you that knows, logically, that the amputated leg is fake, that the demons in a film use fake blood, or that it all is created on a computer.

Not so with this music. It’s all in your head. Which is why I would have loved to experience a demonic piece by Mozart. With his brilliant orchestral work, can you imagine how messed up and scared the citizens of Vienna would have been if Mozart trotted out a “Danse Macabre” or “Night on Bald Mountain”? I know your smiling one of your devilish smiles at that delicious thought. I am, too.
at October 27, 2008
Email ThisBlogThis!Share to TwitterShare to FacebookShare to Pinterest
Labels: Movie/Music Mondays, Music

Very interesting review. I liked your comparison of the "in-your-head"-ness of music to the "on-the-screen"-ness of film. I'll be revisiting these pieces soon.

Excellent news, I've been looking for this since a few months ago but I didn't find it I try to buy it but a friend told he was out of stock.
Well thanks for sharing, great news.

Which ringtone do you use?
Hello friends
Do you like live music? Powerful ringtones? Ringtones help us stay awake. I have collected a lot of powerful songs and created a unique ringtone for you to reference. Here are 5 hot tunes in 2018, you can install by following the instructions without spending a lot of time:

Visit my homepage to find more types of ringtones: https://ringtonedownload.in/

Your review will help me improve my ringtone better. Thank you!