The Wickhams: Christmas at Pemberley by Main Street Theater 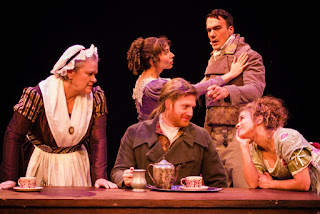 My wife’s aunt is in town from Tucson and she loves the theater. No sooner did the thought of theater enter my wife’s mind than she went online and found the Main Street Theater’s website. We were in luck: Friday, November 22, was a preview performance of The Wickhams: Christmas at Pemberley by Lauren Gunderson and Margot Melcon. We snagged three of the last tickets available, and they weren’t even together.

The Intimacy of Main Street Theater


Perhaps the greatest selling point of the Main Street Theater (MST) is the size and arrangement of the venue. The stage is actually the center portion of a room about the size of two standard living rooms put together. On all four sides are three rows of seats. I made a point to count them. I came up with 110 total. Clear lines of sight, including the other audience members. The actors perform in the center section, with the entrances situated on the four corners. Live theater is fantastic, but to have the actors literally be steps from you is another thing entirely. You feel like you’re a part of the story. You just don’t have any lines to memorize.


The Wickhams: Christmas at Pemberley is the second sequel Gunderson and Melcon have written to Jane Austen’s Pride and Prejudice. Even if you’re like me and know nothing about the story going into the theater, the title tells you enough. It’s Christmas and the setting is the Pemberley estate, the ancestral home of Fitzwilliam Darcy who is now married to Elizabeth, the heroine of Austen’s novel. The family is gathering during the days before Christmas and this includes Lydia Wickham, Elizabeth’s sister who wed George Wickham in the novel. George, it seems, is away much of the time, but Lydia, although lonely for her husband [she knows nothing of the true reason George wed her] is nevertheless enjoying the season.

The setting is the lower floor of the Pemberley Estate. If you’ve seen Downton Abbey, it’s the downstairs room where all the servants spend their time making the upstairs, fancy rooms run smoothly. I’m a big fan of entire stories that take place in one setting.


The play consists of only seven characters, three servants and four upstairs folk. There is Mrs. Reynolds, the head of the servants, the one who makes Pemberley hum. Brian is a footman with a penchant for tinkering and inventing things and longs to improve his station. He has a little history with Cassie, the new kitchen maid, recently added to the staff. He has eyes for her, but she’s desperate to make her own way in life.

If you write a sequel to Pride and Prejudice, you have to include Mr. and Mrs. Darcy. Both Fitzwilliam and Elizabeth are getting used to being the heads of the household and are still very much in love. Lydia Wickham pines for her husband, but is excited to be visiting Pemberley again. Finally, there is George Wickham, always trying to scheme his way to fortune and always failing, despite the bribe he accepted from Mr. Darcy to get him to marry Lydia.


The plot of the play has multiple threads. There is Cassie, her new job, and the interactions between her and Brian. You’ve got Lydia, fluttering around the estate relishing the vibe of the season. Mrs. Reynolds just tries to keep the machine that is Pemberley well oiled and running, something that’s thrown asunder when George shows up, bleeding from a recent fight. His appearance and the actions of the various characters to him sparks the main part of the story and drives it to its conclusion.


Like I wrote before, I didn’t have a clue about this story going into the theater, and it was such a refreshing way to experience a tale. Think about it: for just about every story you consume, you read a blurb on a dust jacket, see a movie trailer, or watch a commercial. To go into the theater cold and just allow the story unfold in front of you is great.

But with theater, the story is told via the actors and this cast was fantastic. Claire Hart-Palumbo gave Mrs. Reynolds the gravitas necessary to the woman who runs the entire estate. Her humorous moments typically came as a response to the events and were wonderfully understated but still authoritative.

Alyssa Marek as Cassie brought a modernness to her role that might not have existed were this play not written over two hundred years after Austen’s novel. Marek relied on body language and subtle side-eyes to convey the character’s feelings and frustrations as well as some truly funny moments.

Nathan Wilson as Brian was did remarkably well as a footman who wanted more in life. The eagerness in his delivery when he explained his inventions really gave you the sense this character was destined for something greater if only the rigid class system of Regency Britain would allow it. Facially, Wilson gave Brian those extra little nuances that had me smiling throughout most of the performance.

I honestly cannot recall any of the actors who played Mr. Darcy in the various films, but Alan Brincks was fantastic. His deep baritone voice could fill the space when he was making a ruling as head of the household or come out soft when talking with his wife. I loved his costume and how he would often stand as if he were posing for a portrait.

That loud baritone would often boom when Darcy faced off against George Wickham. Blake Weir sported a short beard, more of a glorified five o’clock shadow, which added to Wickham’s ne’er-do-well character. The kind of scoundrel he was. There was a haughtiness to Weir’s vocal styling that made you enjoy rooting against him.

Leslie Lenert as Elizabeth was every bit the heroine Austen imagined. Still in love with Darcy, Lenert portrayed Elizabeth as a strong woman, capable of defending her husband’s actions as well as taking actions on her own to help her sister. When Lenert would look at Brincks, you get the impression they really are a couple.

But if there was a standout to the performance I saw, it was Skyler Sinclair’s portrayal of Lydia. Again, I came in to the story cold—so cold, in fact, that at intermission, I had to be reminded of what Darcy did for Wickham in the novel—so all I knew of Lydia was how Sinclair played her. Sinclair as Lydia is a carefree soul, full of smiles and pithy asides. The way she could deploy humorous facial expressions really fleshed out Lydia as a character. As funny as Lydia is, however, her story arc is the one that changes the most, calling for broader emotional expressions. Sinclair delivers all aspects of the arc splendidly.


I haven’t watched a play in a little over a year, and the performances at the Main Street Theater reminded me how much I enjoy watching stories unfold in front me. I think I wore a goofy grin on my face throughout most of the show as the story twisted this way and that, but especially for the talented actors.

Experiencing a story with no prior knowledge was a blast. Makes me want to subscribe to an entire season and just show up at the theater with no preconceived ideas about the play or the playwrights.

Speaking of playwrights, I researched both Gunderson and Melcon on the way home after the play. There is an excellent 2017 article from The New Yorker that includes the genesis of their first collaboration. Ironically, the title of the article is “You’ve Probably Never Heard of America’s Most Popular Playwright.” I count myself in that category prior to Friday night. Now? If I see a Gunderson play being showcased in a Houston theater, I’m buying a ticket.

I thoroughly enjoyed The Wickhams: Christmas at Pemberley as did my wife and her aunt. We talked about it all the way home. The actors did a superb job at bringing this delightful tale to life, and I almost want to see it again, but I don’t want to deprive others the chance to see this show. The production runs through 22 December, but tickets for most of the performances are selling fast or limited.

Head to the Main Street Theater’s website today and add this tale to your Christmas season.
at November 25, 2019
Email ThisBlogThis!Share to TwitterShare to FacebookShare to Pinterest
Labels: Houston, Main Street Theater, theater