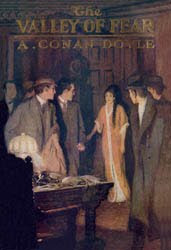 Tell the truth: if you go see the new Sherlock Holmes movie today and Robert Downey, Jr., appears in only half the film, you’d demand your money back. Am I right? I wonder if the readers in 1915 wanted some of their hard-earned cash back as well.

Like many of the tales, Valley opens with Holmes and Watson mulling over some intellectual problem. Holmes has received a cipher from an informant in Professor Moriarty’s organization. Unfortunately, the informant, Porlock, fears his discovery and has called off the solution to the cipher. Undeterred, Holmes and Watson deduce the book from which the coded message emerges. Once translated, the message is a warning that one Mr. Douglas of Birlstone Manor is in danger of being killed. No sooner does the dynamic duo read the message than MacDonald, from Scotland Yard, arrives at 221B Baker Street. He’d like Holmes’s help with a peculiar problem: a man named Douglas from Birlstone Manor has been killed by a shotgun blast to the face.

Well, how’s that for coincidence? Holmes and Watson accompany MacDonald to Birlstone Manor and then stumble into a traditional British mystery of manners. How else to describe the chapters that follow? Holmes is all but reduced to mere spectator as various members of the household are questioned and cross-examined. Holmes asks a question here and there but, frankly, I forgot he was in certain scenes. Sure, at the end, he blurts out a seemingly esoteric question and you remember why he’s so good but it comes at the end of the sequence.

Needless to say, the truth emerges and all because of Holmes. Like the first Holmes novel, A Study in Scarlet, Holmes reveals the killer halfway through the novel. Again, like the first book, Valley then throws the reader across to America of the 1870s and we basically get a novella that has nothing to do with Sherlock Holmes or the first half of the story. Well, it does have everything to do with the killing of Douglas but it isn’t until the Epilogue--when Holmes returns to center stage of his own book--that we are told how everything fits together. It was rather unsatisfying.

That’s not all I found dissatisfying about Valley. For this fourth novel, Doyle all but ret-conned his Holmes chronology with the inclusion of Professor Moriarty. When it came time for Doyle to kill off Holmes in “The Final Problem,” he invented a nemesis worthy of Holmes. It was in this story, set around 1891, that Watson first learns of the dreaded Napoleon of Crime. If you take “The Final Problem” as gospel, then The Valley of Fear belongs in the apocrypha. The reason is that Valley takes place before “The Final Problem” and Watson is fully aware of Moriarty. It’s almost as if The Valley of Fear takes place in some alternate universe.

Okay, so Moriarty is in the Valley of Fear. Except that he’s not. He makes no appearance at all in the novel. His existence is hinted at by Holmes, explaining that nearly all nefarious activities in London all have their genesis with Moriarty. We even get a fun little story of how Holmes infiltrated the professor’s inner sanctum. Clever, fun, but, in the end, not too important in this novel. Even at the conclusion of the novel, when one of the characters is murdered off-screen, Holmes attributes it to Moriarty’s influence. It’s seems a stretch.

Now, as to the second half of the novel, if you take it alone without the framework of the larger novel, it’s dang good. It tells the story of John McMurdo and how he came to work in the Vermissa Valley in Pennsylvania. It’s a coal-mining town and it’s controlled by the Ancient Order of Freemen. These guys are bad ass. They extort, assault, and murder. They’ve got the town in their grip and no one has the stones to stand up to them. McMurdo has an interesting backstory and he assimilates himself into the gang with ease.

Doyle’s tale-within-a-novel is dark and grim. Valley has been called the first hard-boiled novel (take a look at what Hard Case Crime did with this novel) and with good reason. In one scene, the men who have just killed another victim gather in a bar to celebrate their success. They take turns with the bottle and also take turns mimicking the cries of their victims or widows. I was shopping for Christmas when I heard that passage and my blood got chilled. It’s the utter disregard of human life that was surprising and unsettling. I'd almost go so far as to say there are some serious noir elements in here, too.

I pondered what had happened to the author who brought us fun tales tinged with a dark edge of the 1890s. I remembered that Doyle’s son died in World War I but the novel was published before that. In addition, I thought the war’s atrocities might indicate where this darkness came from but that’s not it either since the publication of the first installment of Valley coincided with the outbreak of hostilities (and, thus, Doyle wrote it before the war started). It makes me want to read a biography of Doyle to find out if there was some personal tragedy that led to the darker material. It also makes me want to read the Holmes tales that were written and published after The Valley of Fear and see if the grim outlook continued.

Now, my stated goal is complete. I have read (or re-read) all four Sherlock Holmes novels in advance of today’s premiere of the new Sherlock Holmes movie. For those who may have missed the earlier reviews, here’s the list and the links. I’ll have my say on the film later next week. And I’ll also recap my thoughts on all four novels in a later post as well.

In the meantime, Merry Christmas!

4 December - A Study in Scarlet
11 December - The Sign of (the) Four
18 December - The Hound of the Baskervilles
25 December - The Valley of Fear
at December 25, 2009
Email ThisBlogThis!Share to TwitterShare to FacebookShare to Pinterest
Labels: Hard Case Crime, hardboiled, Sherlock Holmes, Traditional mysteries

I actually have this book but haven't read it. I do think I might like the movie, though. I'll give it a try at least.

I had sort of the same reaction as you did. For me, the least satisfying of the Holes stories.

I felt the same way about Ian Fleming's The Spy Who Loved Me in which Bond only appeared in the final third of the novel.

Your certainly put your finger on this novel's shortcomings in the eyes of a modern audience. I took a similar line in my article "Blast from the Literary Past" (www.blackhorsewesterns.com/bhe13).

In using Doyle's work as the basis for a new novel, I hope I was able to give my protagonist ways to skirt round the "story within a story" framework that limits the original novel's appeal today. Blast to Oblivion, which was well-received by the Sherlockian societies both sides of the Atlantic, is being reissued in an Ulverscroft large-print edition in January.

Just catching up with this one now. I will include it on the next Summing Up so it's part of the list. Thanks, Scott. Hope you had a happy holiday. Did you see the movie?

Charles - I thought the movie was terrific (even with some tenuous threads).

Randy - Haven't read TSWLM (as I'm reading the novels, slowly, and in order). I'm only up to Dr. No. Odd that I read the least satisfying novel in the same week I watched a satisfying movie version (both the Downey one and a couple of the old Rathbone ones on TCM).

Chap - Fantastic write-up! Thanks for the link. I am definitely going to find your novel.

Patti - As you can read here (and in my review, forthcoming), I enjoyed the film quite a bit.

While Valley was before WWI, you can still take into account the Boer War and Doyle's book on the subject.

And he also, if I remember correctly, had a bunch of people close to him die around the same time (wife, son, brother-in-law) which would help direct him into the wackiness of the Cottington Faeries. Not postive on the dates though.

Speaking of Doyle did you ever read Mark Frost's The List of 7 and The 6 Messiahs? Cool, pulpy stuff with Doyle as a main character.

It's stuff like Valley though, that I've always found frustrating about the Holmes canon. All the times he disappears, recounts things after the fact to Watson. Not to mention the decided lack of Moriarity in the actual stories.

A sign I should call it a day--Cottingley Faeries, not Cottington.

Chad - Thanks for the insights into Doyle. And I've heard about the Frost books but have not read them. Might seek them out.

I'm still curious about why Doyle chose to include Moriarty's presence in Valley. Wonder why he just didn't write the story and leave the professor out. Evil and crime are pervasive even if Moriarty doesn't have his finger on it.

Scott
I've very much enjoyed all your reviews. You mention the darkness, and nothing comes to mind immediately for me. The story was written in early 1914 and probably finished by the end of April 1914. That was well before any of ACD's friends or relatives died. His first wife died in 1906, and by 1914 he had remarried and had 3 new young children.

However, he was visited in April 1913 by WJ Burns of the Burns Detective Agency, and may have gotten either some of the US backstory or at least the hard-boiled Pinkerton detective stuff from him at that time.

Doyle's next Holmes story after Valley of Fear was His Last Bow, and that had such a different intention that I don't think one can gauge ACD's views from it. However, the stories in the Case Book do offer a somewhat different view of ACD and are worth examining.

For a really good bio of ACD, I suggest Andrew Lycett's The Man Who Created Sherlock Holmes (available under a different title in the UK). A lot of personal papers and other research has come out since the many earlier bios were published, so the Lycett book is your best source.