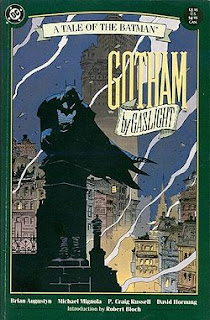 (My latest contribution to Patti Abbott’s Forgotten Book Fridays. Head on over to her blog for the complete list.)
Being first has its advantages, especially when you’re creating something new. Back in 1989, a singular comic book landed in stores: Gotham by Gaslight, written by Brian Augustyn and drawn by Mike Mignola (of Hellboy fame). Like the best of alternate history, Augustyn asked a simple question: what would Batman been like if he lived in a Victorian Gotham? The answer is the same, but slightly different. If the devil is in the details, Augustyn got everything right with this first alternate history title from DC Comics. Bruce Wayne’s parents are still killed in front of him except this time it is as part of a stagecoach robbery. And, as his enemy, none other than Jack the Ripper who has crossed the Atlantic and set up shop in Gotham. Here’s the problem. A strange bat-like creature has also made an appearance in Gotham. Some think he’s doing good. Others see him and Jack as the same man. Not a huge deal until the police show up at Wayne Manor...and find incriminating evidence that Bruce Wayne is Jack the Ripper. The best part of this story is Bruce becoming the World Greatest Detective. Now, that’s a moniker we’re used to reading about Batman but it’s put to the test after Bruce is convicted. He asked for all the evidence and has to figure out who the real killer is before he, Bruce, is hanged. Talk about pressure. Mignola’s artwork is wonderfully moody and a real steampunkish vibe is present throughout the book. The sequel (guess that spills the beans about the ending of the first story) is titled Master of the Future. It takes place eighteen months after Bat-Man defeated Jack the Ripper. Here, the Mayor of Gotham insists on having a world’s fair to demonstrate how forward-thinking Gotham is as it enters the twentieth century. A madman, Alexandre LeRoi--a copy of Jules Verne’s Robur-the-Conqueror--puts the city on notice: cancel the foul, pollution-filled fair or burn. The Mayor keeps the fair on schedule and LeRoi also keeps his retribution on schedule, too. I’ll admit that Master of the Future isn’t nearly as good (or moody) as Gotham by Gaslight. Batman is best when he, and the story and the scenery, are moody. The success of Gotham by Gaslight lead to DC Comics creating an entire line of “What ifs” under the imprint Elseworlds. Unlike Marvels's "What If...?" titles--which imagined alternate timelines from the already-established timeline--DC's Elseworld titles usually involved putting heroes at different places durig history. Thus, you get Wonder Woman in the Old West or the baby Superman's spaceship landing in the Soviet Union. The high point was the annuals (larger stories, usually one-shots, of monthly titles) of 1994. Every annual published that year was an Elseworlds title. Some of these stories are quite good; others not so much. Over the years, I stopped collecting the monthly comic books but I get most every Elseworlds title. Other than Gotham by Gaslight, some high points are: • The Blue, the Gray, and the Bat - Batman in the Civil War • Red Rain - Batman vs. Dracula (a trilogy actually) • The Doom that Came to Gotham - Batman vs. Lovecraftian monstrosities • A Nation Divided - Superman as a Union soldier • Speeding Bullets - Superman raised by the Waynes and becomes a superpowered Batman • The Feral Man of Steel - Superman lands in India with Rudyard Kipling There are a lot of these stories. Frankly, the Batman stories work best but many of the Superman stories are good, too. Here’s a link for more. But it all started with Batman in the Victorian Age. It answered questions we all wondered about. Now, we have many possible answers.
at April 03, 2009
Email ThisBlogThis!Share to TwitterShare to FacebookShare to Pinterest
Labels: Friday's Forgotten Books

Never knew about these either. My education continues.

Another forgotten book? See? You're good at this!

Patti - Well, you know, I went to school to become a history professor...these FFBs are my way of doing that.

John D. - The fun thing I bring on most of these 'forgotten' books is that they are new to me. This one wasn't but most of'em are. Thanks for stopping by.

I've got to read this. I read one of the Superman alternative histories once and loved it. And I seem to recall a Batman when he was some sort of Knight of the round table. Or did I dream that last one?

You are not mistaken. The book in question is Dark Knight of the Round Table. I think I have it somewhere. I think there's even a Superman/King Arthur tale, too.

Elseworlds is one of those series I know about, but never picked up. So many books...
Enjoyed the review.

i'd totally forgotten that Mignola did this! I would've loved a whole line of monthly spin offs about this, to be honest. Sort of like Marvels ULTIMATE universe but...completely different.

was this the one that had a twisted cameo by the joker?

Yes, the Joker makes a cameo. He's a killer of something like 10 of his wives, all by poison. With the police cornering him, he takes some of is own poison. It doesn't kill him. It just stretches his mouth into the Joker grin.

Having a DC "Ultimates" would be a cool idea. The closest we got was Stan Lee's Imagining the DC Universe.

Hey Scott, Gotham by Gaslight was one of my most favorite of the Elseworlds books. I love this series and wish they would continue with some of the better story lines. A few others of note: Batman: Gotham Noir, The Golden Age, and Kingdom Come.

Michael, Yes, I remember those three and have them at home. There was a time where the only titles I'd but were Elseworlds titles. Thrillkiller is another favorite of mine. Oh, and John Byrnes's Generations is great. That's the one where all the characters age in time. Thus, Bruce Wayne, who started as Batman in 1939, actually stops being Batman after awhile. Nice concept. Since all the Marvel/DC crossovers are theoretically Elseworlds, I particularly enjoy the Batman/Captain America one where the action takes place in the 1940s. Great retro vibe.

I've got these, Scott, and enjoyed all of them - though some better than others. I like the way the myth is reshaped and stretched - and a perfect example to my mind is Smallville TV series; they've managed to change the myth and make it fresh yet it's also so familiar too; quite an achievement.