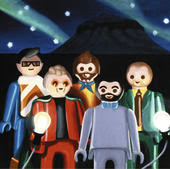 (For other forgotten albums and books, head on over to Patti Abbott's blog.)

Eight years ago, I caught an episode of PBS’ “Frontline” where they focused on the music of Iceland. I don’t know about you but that seemed intriguing. At that time, Bjork constituted all I knew about Iceland and their indigenous music scene. That one program not only opened my eyes to the stark beauty that is the topography of Iceland but it also opened my ears to a whole new amalgam of music.

The “Frontline” story mentioned a few of the bigger names in Icelandic music: Gusgus, Mum, Trabant. Two acts stuck with me to the point that I sought out and acquired their music. Sigur Ros was one. However, the band that really struck a chord with me was the Apparat Organ Quartet (AOQ). The AOQ, to date, have only one CD, a self-titled number from 2002. Led by Johann Johannsson, a record producer and composer, AOQ enlists four organist/keyboardist and one drummer. In the spirit of invention, Johannsson brought his group together and improvised in the studio. Here’s where things get interesting and unique. Except for the drummer, no member plays modern instruments. Instead, they salvage vintage synthesizers, vocoders, keyboards, and other organ-type instruments to make their unique sound.

The sound. Describing music with words is, arguably, mostly futile. Yet, we try. Remember the scene in Star Trek: First Contact where the android, Data, has just had his emotion microchip activated. When his friend, LaForge, tries to describe emotions, he always uses a different type of emotion to describe a particular feeling. When Data asks LaForge to describe an emotion without another emotion as context, LaForge can’t do it. That’s the issue with the AOQ.

The soundscape AOQ creates is at once completely unique and blatantly fusionistic. The fact that the only melodic instruments are keyboard immediately bring to mind everything from Kraftwork to Thomas Dolby, Tony Banks (Genesis) to Moby, with little dash of Vangelis, Jean-Michel Jarre, and Howard Jones thrown in for good measure. As the reporter in the “Frontline” piece mentions, the landscape and seasonal variances works its way into the music of Iceland. Some of the slower tracks, like “Softu Litla Vel,” could be used for meditation. They build a space, an openness, in your mind where the oppressive months-long night of Icelandic winters can dwell. There’s something very winter-like with these slow songs. “The Anguish of Space-Time” channels the inner Twilight Zone, that part of a person that might envision himself floating alone in outer space. The little twinkly flourishes feel like a beacon echoing in the emptiness of space, calling us home but we don’t know which way to go.

Lest you think AOQ is all new-age goo, they don’t forget a basic precept: they are a pop band. “Stereo Rock and Roll” has a quirky, inventive flavor to it. It’s a song with a beat you could see cheerleaders dancing to at halftime of a basketball game. It’s keyboard melody brings to mind some of Tony Banks’ later efforts in Genesis. The experimentation of the studio can be heard in “Global Capital.” The same beat continues throughout the song but AOQ create two different melodic lines, an insistent A melody and a beautiful, counter B melody. And these guys rock harder than you’d think four organists could. “Cruise Control” packs in a driving beat and a hard-edged, distortion sound that you’d swear was electric guitar.

As a whole, the debut CD by the Apparat Organ Quartet is probably not for everyone. But there is enough of a pop music vocabulary here that you will likely find a track or two to your liking. I’m not the only one who equates music with the seasons. Certain music just belongs in certain seasons. AOQ is, to me, largely a winter CD. There has not been a winter since I got this music many years ago that I didn’t regularly listen to it. Their Myspace page has a few of the main tracks. See if there’s something you enjoy.

When Patti Abbott (via another blogger, Chris, I think) suggested a forgotten music week, I jumped at the idea. And I’d like to continue it. I’ve contacted Patti about making this Forgotten Music idea ongoing. Starting next month, I will host a monthly Forgotten Music feature. It’s just like Patti’s weekly Forgotten Books or Barrie Summy’s Book Review Club. To make it manageable, I’d like to have Forgotten Music be the last Thursday of each month. The first one is 25 February. For anyone who is interested, just e-mail me ahead of time and I’ll collect the names and links and we can all learn some new music we may not know. I think I’ve got a year’s worth of material already.
at January 22, 2010
Email ThisBlogThis!Share to TwitterShare to FacebookShare to Pinterest
Labels: Forgotten Music

I liked the Sigur Ros you recommended when I was loading my MP3 player. Have to try this too.

Sign me up for FORGOTTEN MUSIC. I can easily do a year's worth of material, too! I've circled Feb. 25 as the next posting. Let me know if anything changes.

Don't stop posting such stories. I like to read blogs like this. By the way add some pics :)

Forgotten Music Thursday! An inspired idea. I'll be there.

Um, yeah, I'm completely, totally on board. Great idea, Scott! I'll have something on the 25th. And thanks for hipping us to this band.

My favorite Sigur Ros is (). Yours?

I'm on board. I listen to a lot of obscure Australian music that may have been popular Down Under but was either never released in the US or generally ignored by the listening public here in the States. If you want any suggestions/ideas from that realm, let me know.

That sounds good. Cold weather is clearly good for creativity.

I love music. What are the ringtones you are using? I have the best quality free ringtones music collection 2018. Unique ringtone. Hot ringtones. Here are the most recently downloaded songs:

Also you can refer to many other genres of music at my homepage here: https://bestringtonesfree.net/