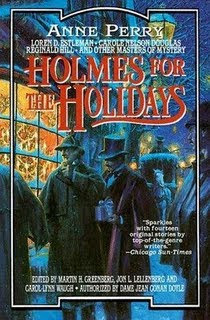 (The latest contribution to Barrie Summy's Book Review Club. For the complete list, click the link at the end of this review.)

With less than thirty days until the unveiling of the new iteration of the famous detective, there is one overriding reason why Sherlock Holmes is so popular over 120 years after his first adventure: we love the atmosphere of Victorian England. The sounds of the clip-clop of horseshoes on cobblestones, the sights of men and women dressed in late-Victorian finery, the smell of a crackling fire in a tavern, they all go together and form something special and unique. It’s a nostalgia for a time we’ve never known but, through the works of Arthur Conan Doyle, we can know and come to love.

With all the emotion surrounding Sherlock Holmes and his redoubtable friend, Dr. John Watson, it is no surprise that, of all the stories, “The Adventure of the Blue Carbuncle” is constantly mentioned as a perennial favorite. I consider it among my favorite Holmes stories and I can find little to dislike about the story. One aspect of the story, however, always saddens me: it’s the only Christmas Sherlock Holmes story.

And how could they not be? Just look at some of the names: Anne Perry, Loren Estleman, Jon L. Breen, Bill Crider, Carole Nelson Douglas, and the late Edward D. Hoch. As you read these stories, take special note of the historical details about Christmas itself. Remember, these are stories written by authors in the 1990s about the late 1800s. Moreover, the 1880s are forty years after the publication of Charles Dickens’ “A Christmas Carol,” the book credited with changing Christmas to what we know it today. Different authors focus on different aspects of the Christmas season, all with two men who are proper English gentlemen. It’s a telling trait, yet a fun one.

Speaking of Dickens, two of the better stories both concern themselves with Scrooge, Marley, Tim Cratchit, and a certain set of three ghosts. Loren Estleman’s “The Adventure of the Three Ghosts” concerns itself with Lord Chislehurst, a Member of Parliament, and in need of Holmes’ assistance. You see, three ghosts have visited the Lord, just like his father’s old boss. Know where this is going, don't you, and the true identity of the Lord? Yeah, he’s the grown-up Tiny Tim who now owns Scrooge old counting firm. In this story, Dickens is real and is the man who “chronicled” the story of Scrooge, Bob Cratchit, and Tiny Tim. Watson’s read the book but Holmes knows nothing about it. In fact, Lord Chislehurst/Tim Cratchit doesn’t like the book. Holmes and Watson take the case and, in their usual élan, solve the case…although the ending is not entirely predictable.

Bill Crider tackles the same material but puts a different spin on the story. In “The Adventure of the Christmas Ghosts,” three ghosts are besetting the grandnephew of Ebenezer Scrooge, Franklin, as well. Holmes suspects foul play—natch—and lands his suspicion on Timothy Cratchit who still works in the counting house. Crider highlights Holmes’ often eccentric qualities, including his acting ability, in this fun little story also with an ending that’s not entirely expected.

With any anthology, you don’t often have to read the stories in order. I’d recommend reading these two Scrooge stories back-to-back. You’ll get a sense of how the two authors both treat the same subject, how they see the original Dickens tale, and how the perpetrators in each story use similar methods. Estleman’s story references other Holmes stories that’ll be sure to garner a smile as you read it. Crider’s piece is funnier in that, with a wink and a nod, he inserts famous lines that’ll pull a chuckle from somewhere inside you.

Just as I have my Christmas music CDs that I store for eleven months out of the year, I have some favorite anthologies of Christmas stories that share space in the same box. Of all them, Holmes for the Holidays is my favorite. It evokes certain images, particular Christmastime feelings, that I, as Texan don’t always get to experience. Why not find a copy and make a new tradition of reading these stories in December. You won’t be disappointed.

Scott, there's nothing about this that doesn't sound wonderful.

Btw I posted a quote about Doyle and Dickens from Rex Stout and thought whether you would disagree with or not.

I had never thought about having a special collection of Christmas stories. What a great idea and an excuse to look for this book.

I'm adding this to the Christmas list, and I know just who's getting it. Sounds perfect both for Holmes fans and Christmas elves. Thanks for the tip.

It is indeed a good book. If your readers are interested, I just re-released my long-out-of-print Holmes pastiche, THE PANDORA PLAGUE, about the first association of Holmes and magician Harry Houdini in an enlarged and annotated edition available at Amazon.com. Check it out: http://www.pandoraplague.com/.

Oh, oh, oh! This sounds fabulous! I loved the TV series with Jeremy Brett. The whole clip-clop thing... need to see that again. But this book looks really fun to read.

What a fabulous idea for an anthology! Thank you for bringing it to my attention. (And I can't wait for the movie, either.)

I love Victorian England and I love Robert Downey Jr. So I can't wait!!! And, I'm with Charles Gramlich, I'd read this based on the title alone. And, of course, your review. :)

Great review. I think you are right. It is fun reading different versions of stories.