Forgotten Books: A Study in Scarlet by Arthur Conan Doyle 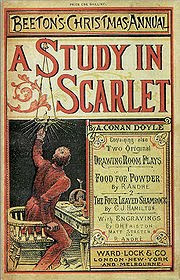 (This is my latest contribution to Patti Abbott's Friday Forgotten Books project. For the complete list, head on over to her blog.)

I think it’s safe to say that Sherlock Holmes will never be forgotten. New editions of his stories are published every year, with Hard Case Crime being the latest. This month, we have a new movie based on him, one that could start a film franchise, with another on the way. Holmes has also made his way into comics this year with Dynamite Comics’ “The Trial of Sherlock Holmes.”

A Study in Scarlet (Scarlet) is Holmes first adventure. Upon re-reading it, I realized I had forgotten lots of the nuances of the book. I also realized that, had it been published today, for modern readers, it might not have caught on. Well, let me back up: it may not have gotten passed the editors.

Dr. John Watson, as everyone knows, is the chronicler of his adventures with Sherlock Holmes. As Scarlet opens, Watson recounts his deployment and wounding in Afghanistan and his subsequent recovery. Running out of money he received from the army, he’s looking for a roommate. A fellow army buddy, Stamford, comments that he knows of another man also seeking a roommate. Upon seeing Watson’s eagerness, Stamford makes the following reply:

Young Stamford looked rather strangely at me over his wine-glass. “You don’t know Sherlock Holmes yet,” he said; “perhaps you would not care for him as a constant companion.

It’s a wonderful way to set up Holmes’ introduction later in the chapter. For those of us now, more than a century removed from Holmes’ arrival on the world stage, the line of dialogue comes across with a wink and a sly grin. For Doyle’s contemporaries, it was something altogether different.

The two men agree to take rooms at 221B Baker Street. The second chapter is a dissertation on Holmes’ methods. Like any student in geometry class, one Holmes explains his methods, they seem easy even though Watson scoffs at them more than once in this novel.

The heart of the book is the mystery brought to Holmes by the Scotland Yard detectives Gregson and Lestrade. In a house in Brixton there is a corpse of a man. On the wall, above the body, written in blood, is the word ”Rache.“ Holmes invites Watson to accompany him. With Watson, we see Holmes’ methods up close, his minute inspection of seemingly random objects as well as the contempt Holmes has for the London police.

The bulk of this section is pretty standard (although, at the time of the writing, there was barely a standard created). Holmes’ reveal of the killer is showy, sudden, and out of thin air. This happens at the end of part one.

My biggest beef with Scarlet is the second part of the book. In an attempt to give background to the killer, Doyle breaks with the established train of the story, shifts to third person POV, and throws the reader across the Atlantic and into the wilderness of the American Rocky Mountains. What the hell? For five chapters, we get the background of who the killer is and his relationship with the the victim. Only in the last two chapters of the book do Holmes and Watson reappear.

This kind of storytelling would never fly in the modern world. Part way through Part II, I kept thinking ”I know this has a point but I can’t figure out what it is.“ Gradually, the names that you’ve read in Part I show up and you figure out what Doyle is doing. Late in Part II, when the focus shifts back to our heroes, the killer speaks and confirms the data in the five preceding chapters.

Doyle was twenty-seven when he wrote this and it was his first novel. However, the book would have been so much more powerful if the killer had told the story, adding the backstory along the way. The big shift totally throws the reader out of the moment and it’s the biggest flaw in the story.

Unlike so many other adventures (A Scandal in Bohemia, Blue Carbuncle, Silver Blaze, Red-Headed League, The Final Solution, The Hound of the Baskervilles), A Study in Scarlet is not one of the stories to which you’re likely to return over and over. Nonetheless, this is how the Holmes phenomena started. For that alone, it’s an important book. It’s definitely worth reading for anyone who enjoys Holmes, Watson, and their adventures.

At 27, producing any book is remarkable. Nice to see an author grow over time and GROW in his case.

And doesn't Brigham Young pop up at some point during the second half of the novel? I could be wrong. But other than the introduction of Holmes in the first section which is brilliant, I never remember much of the case.

I always liked the title, A Study in Scarlet.

thanks for your review. I'm new to Sherlock, so these help me decide which one to read next.

Patti - I agree. I'm over half way finished with The Sign of the Four and it's a much better written and paced novel.

David - Yes, BY makes a cameo. Not an entirely nice one, either. And I was with you: before re-reading it, I couldn't have told you a thing about the case.

Charles - Since the title is distinct among the normal type of title, it's probably the best title of the four novels.

Laurie - Looks like you and I were commenting at the same time. For which Holmes stories to read, I'd still recommend the first two short story collections (The Adventures of... and The Memoirs of ...) followed by The Hound of the Baskervilles.

I just bought a collection so Sherlock Holmes....which my 16 y.o. is reading. :)

thanks for the suggestions, Scott.

It does seem a good time to read Holmes again. I have the Baring-Gould Annotated books. Debating whether the New Annotated volumes would be worth buying.

Barrie - Good to hear about your teenager. I was slightly younger when I first read Holmes.

Evan - I've checked out the New annotated Holmes collection and I'm about ready to add them to my personal library. I own the Book-of-the-Month Club, multi-volume version but the New annotated books have so much information that they are fun to pore over and get lost in. I'd say go for it.

This is a very good review, capturing both the strengths and weaknesses of the story. I think the other novels are better, but it does provide a striking introduction to Holmes.

I'd also second Scott's suggestion on what to read. Start with The Adventures, and then get The Memoirs. These contain the best Sherlock Holmes stories. After that you might read one of the novels (in particular The Sign of the Four or The Hound of the Baskervilles), or simply continue reading the short stories in the order of book publication.

RandallS - Thanks for stopping by and the good words. I'm halfway through Hound already and remembering how very good it is. After this little novel excursion, I'm thinking about going through the stories again. I have never read the Case Book or the Return stories. Guess I'm in for a treat.