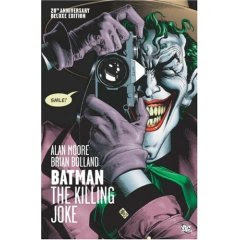 One of the best things about how Heath Ledger and Christopher Nolan portrayed the Joker in The Dark Knight was the lack of an origin. They don’t tell you who this guy is, why he wears make up, and how the heck did he get those scars. The Joker himself tells at least two variations on the origins of his scars. In one version, his dad carved up his son’s face. In a second, Joker tells Rachel that he did it himself to help his depressed wife.

I liked it that The Dark Knight didn’t bother with an origin of Joker. But, if you’re going to tell where the Joker came from and how he came to look like he did, Alan Moore’s the man to do it. The writing genius behind Watchmen, V for Vendetta, From Hell, and others in 1988 wrote the definitive take on the Joker (in comics) with The Killing Joke (1988). I have the original book stashed away in my myriad of comic boxes but I reread it after I picked up DC Universe: The Stories of Alan Moore trade paperback at Half Price Books. And its uncanny how similar The Dark Knight (TDK) and The Killing Joke (TKJ) are.

TKJ opens with Batman going to Arkham Asylum and sitting down opposite The Joker. Brian Bolland does the art and it is a series of nine frames per page without dialogue. The Joker is playing with a deck of cards and Batman speaks. He wonders how it will end between the two of them, questions whether or not death is the inevitable conclusion. Only when Batman grabs Joker’s hand (to get the clown to listen to him) that Batman realizes the Joker is an impostor (because white make-up smears on Batman’s glove). Once again, the real Joker is out and once again, Batman must bring him back.

But TKJ is unlike other Batman comics. Batman himself is a secondary character. This is a story about the Joker and how he came to be the Joker. You get back story here. You learn a little about the man, that he had a pregnant wife, and was a failed stand-up comedian. One thing Moore never does is name the man who would become Joker. He names his wife, but that’s not nearly the death knell as naming the Joker would have been. To do so would be to eviscerate the character and reduce him to human size. I mean, can you imagine knowing that the man who kills for pleasure was born as a Ralph?

The central theme in TKJ is fate and insanity. We all know the story of Joker’s origins in the comics. He was breaking into the ACME chemical plant dressed as the Red Hood (literally, a red hood), Batman shows up, the Red Hood falls into a vat of chemicals and voila: green hair, white skin, red lips, and that smile. Tim Burton’s Batman took that approach sans the hood. It works in the comics. But in TKJ, we learn that Future-Joker’s wife died the day of the break-in, taking with her their unborn child. The goons who hired Future-Joker pinned him in, forcing him to continue the heist. Future-Joker was scared, stammering all the way. Then, after the fall, the swim in the chemicals, he emerges, takes stock of his life (now a criminal, a widower), his garish appearance, and snaps. Joker starts to laugh at his circumstances and the panel by Bolland is one of the best in Joker history: Joker, both hands in his new green hair, with the word “HA” filling the panel behind him.

The present day story is Joker kidnapping Commissioner Gordon, shooting Barbara Gordon (Batgirl), paralyzing her, and taking photos of it all. There is also an implication of rape. The Joker’s goal is to make Commissioner Gordon go insane. To the Joker, there is a fine line between sanity and dealing with all the crap life throws at you and insanity, where you make your life whatever the hell you want it to be. In an abandoned amusement park, Joker tortures Gordon with the photos and other things, all psychological. When Batman arrives, Gordon commands him to bring Joker in by the book. It’s not what Batman wants but it’s proof that Gordon, like all of us, takes the crap life throws at us, deals with it, and moves on. We’re damaged, sure, but life is life. You don’t get to just throw up your hands and make your own rules, like Joker did.

The criticism I have with TKJ is Joker’s snap from sanity to insanity. It seems, well, trite. No doubt learning your wife and unborn child died in a freak accident would send someone down the tubes. No doubt participating in a botched heist would ruin your credibility. No doubt seeing your permanently changed face would send you over the deep end. But insanity? I’m not completely sold. But that’s just me. One glaring omission in the DC universe is Joker: Year One. We’ve got Batman: Year One (the book largely responsible for the look and feel of Batman Begins) but we have yet to get Joker: Year One. If Moore’s take on Joker is true, then how did a failed comedian go from inept crook to criminal mastermind. You’d think that Joker would go after the bosses of the guy who hired him. Or, to take a riff from TDK, you’d expect Joker to coerce the thugs in Gotham to his side using whatever means necessary. Unlike the TDK where you don’t want to know where Joker came from, in the comics, you do. And I want to know more. What happened the day after? Where did he go? How did he consolidate his power?

A note on the violence in TKJ. Back in 1988, when I first read this book, it was two years since Frank Miller’s The Dark Knight Returns. There was violence, sure, but Miller’s look and feel was so different that it didn’t really register. The Killer Joke was different. It looked like a comic, felt like one, and here you had the shooting of a prime character in the Batman family. You had the implied rape. It was brutal, and it still is. Later that year, the storyline A Death in the Family started. It was in this story arc that Joker brutally beat then killed Jason Todd’s Robin. Again, with Jim Aparo’s art, you had violence, overt and on the page, in a comic book. I know violence happens all the time in comics but it was jarring in the pages of Batman. I don’t know why but it was. And it still is today.

What I Learned As A Writer: Narration. It’s key to storytelling. It’s so fundamental, it’s almost a joke discussing it. But Moore’s narration of TKJ, specifically Joker himself, is what makes this work shine. Joker, in present day, constantly harangues Commissioner Gordon with tales of insanity and how it’s the only way to live in this screwed-up world. He even pins insanity on Batman. Why else would a man dress up as "a flying rat"? But with the narrator being Joker, you can’t help but wonder if the back story we’ve just read is true. Sure, it pulls our heartstrings (a tad) but is it true? At one point, Joker himself even wonders what is real, the story or the truth. Ditto the last scene, a great and iconic last scene in the Batman oeuvre. How the story is told is essential to the readability (or entertainment value) for the reader. If Moore simply wrote a chronological story, we’d be bored. But he pieces the back story at just the right moments to bring light to the present-day story, much like the TV show "Lost" does. It’s an effective way of presenting a story. Moreover, it allows the reader to draw his own conclusions about the truth.

We now live in a dichotomous world. On the one hand, entertainment nowadays is merely a medium to spoon feed pablum to the masses, to leech out every last nuance out of a story. We don’t have to ponder anything about a story because it’s obvious what the creators want us to know. Our brains atrophy because we stop using them. On the other hand, in a geek boy-filled world, many readers want to know every last detail of a story or an imagined universe. As a writer, I need to know those details…but I don’t have to write it down. Details like that bloat a book. Just look at the bookshelves of SF an fantasy (not to diss those books because I am a geek boy and love the details). I’m an intelligent person, I can fill in the gaps. I am allowed to have my own opinions. As a writer, Moore was brave enough to leave his take on the relationship between the Joker and Batman ambiguous, including the ending. What really happened in those last frames? I need to be brave enough to know when too much is not better. It’s a challenge. One I intend to overcome.
at August 19, 2008
Email ThisBlogThis!Share to TwitterShare to FacebookShare to Pinterest
Labels: Authors, book review, Comic books, Writing

probably my second favorite batman story (year one rules). The ending was one of those moments of stunned silence, i just sat there for a while.

I love that, even in this seeming origin story, the Joker concedes it may not have happened. "if i'm going to have an origin, i preffer it to be multiple choice" (or whatever that quote was).

The snap to insanity, for me, was where Bats and Gordon won. The events that were shown were enough to snap the Joker, and he wants to prove to the world that it's not just him that can be broken so 'easily', but Batman and Jim both refuse to break, and Joker is forced to deal with the idea that maybe it's not the world, maybe it's just him.

That was the vibe i got at the end of TDK too. J has all these plans, this scheme to let the boats destroy each other and prove that everyone breaks like he did, but then it doesn't happen.

My only gripe there is that, deep down in my troubled little pit, i believe the Joker is right. More so in TDK, where there is a twisted truth to what he says.

TKJ is the perfect comic book. Damn, i should write about comics more! Have you read THE DEVILS ADVOCATE, where Jokers is sentenced to the electric chair for a murder he didnt commit, and Batman sets out to prove him innocent?

I have not read The Devil's Advocate. At this stage in my comic reading life, I'm reading The Big Ones, usually in trade paperback editions. I don't subscribe to the monthly books any more. I'll need to find TDA and read it. Sounds great. I thoroughly love The Long Halloween. I'll read pretty much anything Jeph Loeb writes. I've got it and the deluxe edition of Frank Miller/Batman stories (TDKR, Year One, "Wanted: Santa Claus--Dead or Alive") on my bookshelf right now. Oh, and I like the Hush stories, too.

Yeah, I realized this morning as I wrote today's entry that I need to write about comics more, too.