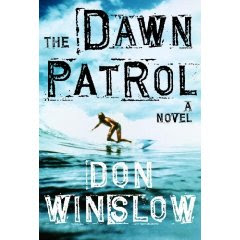 That is the term, in Surfbonics, a character in Don Winslow’s The Dawn Patrol uses to describe the big wave that is approaching the beaches of San Diego. It’s a once-per-twenty-years ocean eruption that makes and breaks careers and that every surfer worth his weight in sunscreen comes to So Cal to experience. And it’s all Boone Daniels wants.

Except Boone, a PI who works just enough to pay some bills, has a new case. It’s a case he doesn’t want. He’ll happily get to it after the big swell. But his client—drop-dead gorgeous Brit Petra—is having none of it. So, Boone has to stow his board and wave bye-bye to the other members of the Dawn Patrol—a group that meets every morning to surf—to go look for a lost stripper who needs to testify in an upcoming trial.

From that seemingly inauspicious beginning, Winslow throws the reader into the world of southern California. And what a tour it is. I happened upon The Dawn Patrol (TDP) because I vacationed in San Diego and wanted to read something criminal in nature and local. I decided against TDP largely because I didn’t have time to buy the book. It’s a good thing, too, for Winslow as Tour Guide permeates this book like the smell of sunscreen at a beach. He gives you the experience of surf culture in So Cal without having ever been there. Folks as far away as Iceland are going to want to chuck off the parkas, pick up a board, and cut through the waves. Having visited the locations of TDP in June, I thoroughly enjoyed Boone and his friends traverse the locales I did. But the beauty of TDP is that you don’t have to know what the Pacific Coast Highway is to enjoy the story. It is a rush. It is like a wave, an epic macking crunchy one, powering its way into your brain.

The style of Winslow’s writing propels the story forward using the present tense and short chapters. I really liked that style and found it way too easy to just read (or listen, as I did) to a few more chapters. Every now and then, Winslow stops the action to give a brief history of a portion of San Diego. Those really make the book, especially his short dissertation on what constitutes a wave. There are books where the author does his best to get out of the way and just present the story. That’s the Elmore Leonard School of Writing. It works. But TDP was like Winslow himself telling you the story, sitting across from a beach bonfire from you, the waves lapping the beach a few yards away, the sun a distant memory, the stars the only other listeners. And it worked brilliantly.

The members of the Dawn Patrol—Hang Twelve, Dave the Love God, Johnny Banzai, High Tide, and Sunny Day—are priceless. Each member gets his or her own bio at just the appropriate time in the book. Hang Twelve, a young surfing fanatic, has his name bestowed on him by Boone for the very reason you’d suspect. Ditto Dave the Love God, a lifeguard on Pacific Beach who, according to Johnny Banzai, has been “spread over more tourist flesh than Bain de Soleil.” Banzai, a SDPD detective, is Japanese-American and if you’re a Japanese-American, according to Winslow, who is “a seriously radical, nose-first, balls-out, hard-charging surfer, you’re just going to get glossed either with ‘Kamikaze’ or ‘Banzai,’ you just are.” High Tide is Samoan and I’ll give you one guess as to his size and his sobriquet. Sunny Day, the lone female of the bunch, is “a force of nature—tall, long-legged—Sunny is exactly what Brian Wilson meant when he wrote that he wished they all could be California girls.” With a group like this, who wouldn’t want to go along for an adventure.

Except the adventure in question gets deadly, and in a hurry. And the choices certain characters make puts them at odds with other members of the Dawn Patrol. As a reader, I didn’t want Character A to do something because Character B would have to fight it. But as a writer, I realized that all the actions of all the characters are precisely correct. These folks are real people who make real, yet sometimes, difficult decisions. They live with the consequences but their choice, based on their character, was perfectly aligned. That is a good lesson in storytelling.

The benefit of the quick, short chapters that Winslow uses is that the action can jump from once set of characters to another in the space of half a page. I liked it, while some other readers may prefer longer chapters. But the quick cuts eliminates the painstaking ‘recap’ where an author has to write something like this: “Just as Bob was blasting through a door, half a city away, Jane woke with a start.” It’s just easier Winslow’s way.

The quick cuts also allows Winslow the flexibility to juxtapose sad scenes with happy scenes, or scenes of calm with scenes of high anxiety. There is a sequence of events, late in the book, where something good and exciting is happening and something bad and exciting is simultaneously happening. I could give all sorts of excuses—it was morning, I was tired, I hadn’t had a complete cup of java yet, the rising sun hit my face at just the right time—but I’ll just confess to the obvious: I felt the sting of tears and goose bumps at a certain scene. Winslow had set a pace of actions and expectations that overcame me at a certain moment. The tears didn’t leave my eyes but my contacts certainly felt more comfortable. I’ll not say if it was tears of joy or sadness. You’ll have to read to find out.

I’ve spoken before about audiobooks but this is one you simply must listen to. Ray Porter gives a fantastic performance. For most of the men, he adopts a surfer voice that puts you right there next to them. For Petra, the British gal, he adopts a lilting English accent. It was spectacular.

Early on the in the book, the Dawn Patrol have an ongoing List of Things That Are Good. Included are such topics as double overheads, free stuff, fish tacos, and all-female outrigger canoe teams. You have to read the entire list and scene because it’s quite hilarious. In crime fiction, there is also the List of Authors That Are Good. I’m compiling my own list, two actually. There’s the Classic Authors That Are Good (familiar names: Hammett, Chandler, Miller, Keene, Block) and then there’s the New Authors That Are Good (new names: Lehane, Pelecanos, Faust, Swiercznski, Bruen, Guthrie). Guess what? Winslow just got himself on the list. Read The Dawn Patrol and tell me if that book isn’t epic macking crunchy.

What I Learned As A Writer: I can be obsessive about POV. For some reason, I keep thinking that POV is set, structured, and shouldn’t change in the middle of a chapter. Leonard does it, J. D. Robb, too, and it’s sometimes distracting. Winslow did it all over the place, but, for some reason, I could follow it. Moreover, it all made sense. With so many characters (The six members of The Dawn Patrol plus something like six or seven more characters) it could have been confusing. But Winslow gives you little cues that alert you to a POV change. It’s not confusing at all. In fact, as the pace picked up, I found myself wanting the POV change just to see how a certain character was reacting to events on the inside. I’m not sure I can make a wholesale change in my thinking—copying some other author’s style is only a way to learn—but I’ll certainly incorporate some of the technique in my second book, Justice in H-Town.
at August 12, 2008
Email ThisBlogThis!Share to TwitterShare to FacebookShare to Pinterest
Labels: audiobooks, Authors, book review, Reading, Writing

I can see why this won your award - excellent review