What is the Tapestry of Books? 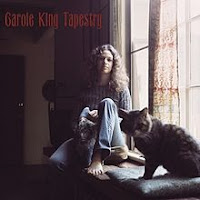 It took only fifty years but I finally listened to Carole King’s Tapestry.

If you read about my regulated reading a few weeks ago, you’ll remember that I’m reading Never a Dull Moment by David Hepworth, his examination about rock music in 1971. As a fun project in 2021, I’m reading the book a chapter at a time, corresponding to a month of 1971. Thus, it’ll take me all year to read this book. Shrug. It’s fun.

Anyway, by reading Hepworth’s book, I have discovered Carole King’s 1971 album, Tapestry. It turns fifty this month, so it’s been fun to read all the retrospectives written about a new-to-me album. By the way, I ended up buying it last weekend after listening to it on YouTube for weeks.

One of those essays is by Bob Lefsetz, the man behind The Lefsetz Letter. He, too, is a new discovery from a few months back. I’ve quite enjoyed his deep dives in music and other things.

Lefsetz starts his post about Tapestry with this observation:

"It was an album for everybody.

That doesn’t happen too often, but when it does, the music business takes a giant leap forward, everybody pays attention, everybody listens, music is talked about, it drives the culture.

Last example? Adele. Her album “21” sold ten times, literally TEN TIMES as much as everything else in the marketplace. It worked for hipsters and as well as casual listeners. It was an alchemy of songs and singing, of passion and precision. “21” was a statement by an artist, not just product to support a system.

Same deal with the Beatles. At first it was a teen phenomenon. Then came “Michelle” and “Yesterday.” No one could deny them as songs.”

Lefsetz goes on to describe the phenomenon of an album for everybody. It is the album owned by the casual listeners, the hipsters, the soccer moms, the dads, the teenagers, the middle-aged, and so on.

After I finished reading Lefsetz’s piece—while listening to Tapestry for the I-don’t-know-how-many-th time, my thoughts turned to books.

What is the Tapestry of Books?

What is the book or books everybody owns? We can leave aside the question of whether or not the books are actually read. What is the book read by casual readers, soccer moms, dads, teenagers, the middle-aged, and so on?

Almost a decade ago, I wrote a short post about going to estate sales and seeing the novels of Louis L’amour on the bookshelves. But I specifically pointed out that those books were on the shelves of proto-man caves. If we were only talking about men’s novels, I’d suggest Clive Cussler or Lee Child or Michael Connolly.

But I’m going broader. I would think few teenagers or soccer moms might read the exploits of Jack Reacher. What are the books that appeal to a broad reading audience?

The Da Vinci Code by Dan Brown instantly jumps to mind. It was everywhere in 2003 and it seemed like everyone had read it. I think James Patterson books land in quite a few home libraries, but I cannot think of a single volume of his that fits this criteria. Stephen King is another author who probably has at least one book in many, many homes, but what’s that one book? Nora Roberts is very popular, but I can’t think many guys read her books.

Another candidate is John Grisham’s The Firm. Maybe To Kill a Mockingbird?

So I’m throwing out the question to everyone. What books are for everyone? What book is like Tapestry?

Oh, and yeah, I listened to Tapestry while writing this piece. Man, is that a great album. How in the world did I never hear it until February 2021?