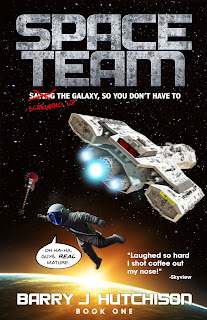 I haven't had this much fun with a book in a long time.

I've been a part of a science fiction/fantasy book club with the same group of folks for over a decade now. There are now six of us and each month, we take turns selecting a book. Some choose award-winning classics. Others choose new works by established authors. Sometimes we choose wild cards, new-to-us authors that somehow catch the selector's fancy. It was in the latter category that Space Team by Barry J. Hutchison landed on my to-be-read stack.

I didn't choose it, but I'm sure glad my friend did.

Space Team is the first of a 12-book series. If the cover doesn't give you a sense of the type of book it is, the tagline will: "The galaxy just called for help. Unfortunately, it dialed the wrong number."

Cal Carver is a motor-mouthed con man who is "accidentally" put in a prison cell with a notorious, cannibalistic serial killer named Eugene. Cal only has to spend one night in the cell before he (might?) is transferred, but he takes matters into his own hands and tries to take out Eugene. Surprisingly he manages to do just that, but then the bug things arrive and he is snatched away.

Bug things, you ask? Why yes. Little nanobots were sent by aliens with the sole purpose of enabling said aliens to abduct “the person in Eugene’s cell” and deliver him to the spaceship. The aliens kidnap the one person in the cell. That’s Cal. Why? Well, Eugene is needed for a very special mission. See where I'm going with this? Cal is mistaken for Eugene the Cannibal.

But that's not even the worst part. Once he is aboard his very first spaceship, he learns about the mission and the entities with whom he is supposed to carry out said mission. There is the blue-skinned female soldier who just follows orders and tries to fend off Cal’s advances. There is the werewolf female alien who barely keeps her temper in check while she puts the moves on Cal. There’s Mech, a cyborg who has a dial that can turn him either all logical or all berserker. And there’s Splurt, a shape-shifting alien described best as Silly Putty with eyes.

This band of misfits—aren’t all memorable teams misfits?—is given a mission to warp across the galaxy and deliver some crucial information to a notorious alien bad guy. In exchange, the misfits will earn immunity from the crimes they committed and will we handsomely rewarded.

So you have the type of story that works so well in just about any version of science fiction or fantasy: a newbie lead character who is teamed with veterans who get to explain all the new things the newbie encounters. Along the way, newbie is able to play to his strengths. In Cal’s case, that’s his quick-witted responses to all the stuff thrown in the team’s path.

There is a high level of frivolity in Hutchison’s book and he writes the characters quite well. With Cal the central character, he is played off each being on the team. His back-and-forth with Mech is hilarious, with Mech constantly wanting to throw Cal out the airlock for the Earthling’s incessant talking and adding the word “space” in front of every new thing he sees. Thus, the title of the book. Cal genuinely cares for Splurt and goes out of his way to include the oddball alien in the group.

The Audiobook is Fantastic

I’m an avid audiobook listener and get more than half the stories I consume in this manner. Narration is key. A good narrator can add that special sauce that heightens the story above where the author wrote.

That is the case here with Phil Thron. This is the first I’ve heard of him, but it won’t be the last. He nails the four main characters aurally so that you don’t need the ‘he said’ and ‘she said’ attributions. Cal is basically Phil’s voice. Mech goes back and forth depending on where his dial is. When he’s the emotionless, all-logical version, Thron uses a British accent. But normally, he’s like a gruff drill sergeant who’s had it up to here with Cal’s yammering. Lauren is a pretty good male-actor-reading-a-female part, not always easy to do. In fact, I haven’t heard it this good since Johnny Heller and Robert Petkoff each did the Nikki Heat books. For our werewolf lady, Thron puts just enough California valley girl into his voice to give that extra sous son of goodness.

The Accidental Discovery via the Audiobook

I listen to many audiobooks, so many that often, I’m down to a week to listen to the latest SF book from the club. If I find myself with too few days and too many hours in a book, I’ll up the narration speed on the Audible app. This does not make the narrator sound like a chipmunk. Rather, it has the effect of shortening the silences between words and sentences. For Space Team, I bumped up the playback speed to 1.4.

And it played perfectly with this book.

Remember how I said Cal was a motor mouth? Well, by playing Phil Thron’s narration at this speed, Cal’s mouth flies by and actually makes him come across like Nathan Fillion in Castle. Now, that TV show is one of my all-time favorites so I was in aural heaven.

I think you can figure out how much I enjoyed this book. I laughed out loud numerous time. And there’s a moment, late in the book, when Mech speaks a simple phrase and dang it if I didn’t literally cheer aloud. I was trimming and bundling hedge clippings so no family member looked at me askance.

How much did I love this book? I’ve already gone back and purchased books 2 and 3 (actually the first three books are available as a single unit on Audible).

Ohmigosh, I think this is my favorite review of all time! I was smiling the whole time and actually laughed out loud a few times. I wouldn't have thought from the title that I would like this book but I feel like I must have it now! Great review! Thanks so much for sharing this with us! :)

You're right. The tagline sets the tone. I'm also a huge audiobook fan. Thank you for the 1.4 speed tip. I'm looking forward to reading and laughing. And I can think of a few others who would enjoy this book. Thank you for reviewing!

I miss so much by never reading science fiction and fantasy. I never did as a kid either. A real hole in my reading.

I go through phases in reading. My husband is an avid scifi reader (and writer) so I read some of his selections between other books on my list. - Margy

Great review, Scott! So good, I grabbed an ebook copy at Amazon for only 99 cents. Sounds like a really fun read. Thanks for reviewing. (Tweeted and shared.)

Reading this book sounds like quite an experience. Thanks for sharing!