The Epilogue of The Last Jedi: Was It All We Needed? 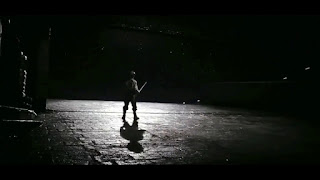 I did something the other night I rarely do with Star Wars movies: dropped the remote.

As part of the inaugural Star Wars generation, I have lived with these films since 1977. I have watched the films countless times. When I do, however, I tend to watch them all in one go, that is, from beginning to end. I rarely watch just pieces of the various movies. No matter the film, I take them as a whole.

But I saw The Last Jedi on cable the other day and, with it being one of my all-time favorite Star Wars film, I stopped just long enough to see where everything was. Turned out, it was the beginning of the throne room scene with Kylo Ren, Snoke, and the captured Rey. Which meant it was also near the time when Finn fully accepts his "Rebel Scum" label. And Rose was still the integral part of the story. And it was minutes from the Holdo maneuver.

If you take all ten movies as a whole and made a list of great moments, two from this sequence in The Last Jedi would make my list: Rey and Kylo fighting together and the Holdo maneuver. That moment when Rey realizes what Kylo had done by killing Snoke, held for more than a few seconds, is so, so good.

Watching to the End


I ended up watching the rest of the film. Man, that visual of Luke Skywalker standing alone up against the First Order's weaponry is still one of the most incredible visuals of the entire franchise.

But it is the epilogue I'm focusing on today. That, and the final words of the film, spoken by Leia.

The Last Jedi Epilogue as The Best Final Scene of the Franchise?


As the Millennium Falcon soars away from Crait, the last few survivors of the Resistance are aboard. Rey and Leia talk about Luke, specifically him being the spark of a new hope to fight against the First Order.

The last words of the film--and the last words uttered by Carrie Fisher as Leia--are "We have all we need." Powerful words, especially considering the character has experienced and seen decades worth of fighting and striving to bring and keep peace in the galaxy. She knows this isn't the end. It never ends. There will always been the need for people to stand up to evil, to be the spark of hope in the face of darkness.

From there, we instantly cut back to Canto Bight and the young kids enslaved in those stables. One of them is telling the story of Luke Skywalker at Crait [leading credence that this is a flash forward]. When their owner/handler breaks up the group, another boy walks off alone. Using the Force, he brings a broom to his hand, but then stops. He stares up at the stars (just like Luke did) and dreams. You see the Resistance ring Rose gave him, a beacon of hope, despite his situation. He holds the broom like a lightsaber and, as a space ship or falling star streaks across the sky, we fade to black and John Williams' music takes over.

But, in some ways, Leia said it best: we had the best ending we needed. The spark of resistance always lives on, in the generations that come after our main characters. That kid is Force sensitive. So is Finn, by the way. It doesn't matter that he's a slave. Just like Rey in The Last Jedi, he was a nobody. The spark of good, the ray of light, always lives on.

Maybe The Last Jedi's ending was all we needed.

That Epilogue on The Rise of Skywalker


I've spent a lot of words on this and you might come to conclusion that I don't even want The Rise of Skywalker. That would be wrong. I enjoyed it. I'll be reading the novelization later this spring and buying and re-watching the movie. And it ended wonderfully with Rey and BB-8 staring off into the same twin suns that Luke did 42 years before. Goosebumps and tears came in equal measure both times I saw the movie.

But maybe, just maybe, you could imagine that the epilogue of The Last Jedi spliced on the end of The Rise of Skywalker. Still have Rey do her thing, but flash back to Canto Bight [or the natives on Pasaana, the planet Rey and company went to and met Lando]. The kids [or native Pasaanas] still tell the story of Luke on Crait [or Rey and her battle with the Emperor]. The boy still looks up to the sky, broom welded as a lightsaber, and dreams.

Now, the spark of hope is galaxy-wide.

Now, Leia's last line is even more powerful: "We have all we need."
at January 16, 2020
Email ThisBlogThis!Share to TwitterShare to FacebookShare to Pinterest
Labels: Rian Johnson, Star Wars, The Last Jedi, The Rise of Skywalker