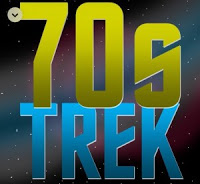 Sometimes, things you love come to an end.

In 2017, I discovered one of my all-time favorite podcasts: 70s Trek. Hosts Bob Turner and Kelly Casto created this podcast series that focused solely on "“The decade that built a franchise.” Their personable demeanors really made this show feel like Bob and Kelly and you, the listener, were just pals talking about Trek. It is a wonderful show. I wrote about it here.

But when you have a title like "70s Trek," there was always going to be an ending.

With the actual decade of the 1970s, the logical end is the December 1979 premiere of Star Trek: The Motion Picture. With the podcast, it was soon after that subject as well. That last episode debuted on 16 August 2019.

I only got around to it this week.

I didn't want the end to arrive.

For many things I enjoy, there is a finite number of entries. Take Sherlock Holmes for example. Despite the myriad of stories available, there is only sixty tales penned by creator, Sir Arthur Conan Doyle. I have purposefully not read all sixty because I want there always to be just one more original story. The same is true for Ian Fleming's James Bond novels.

With 70s Trek, however, there is already an additional Bonus Trek episode detailing the CBS and Paramount merger (or re-merger). Star Trek: Discovery has been out for a couple of years, but I haven't watched any of them. Yet. And tomorrow comes the Trek series I will pay for and watch: Picard.

So I thought it high time to listen to that final episode. I did this morning. It was, of course, bittersweet, but still joyful and wondrous. The episode was necessarily a reflection on the entire series and process of making the show. It's a great conclusion to a great podcast, one of the best I've ever heard.

Thanks Bob and Kelly for this show and the hours of entertainment y'all provided. And, from a guy who is probably the same age as y'all, thanks also for the time capsule and the memories not only of Star Trek, but life in the 1970s. It was a blast.
at January 23, 2020
Email ThisBlogThis!Share to TwitterShare to FacebookShare to Pinterest
Labels: 1970s, Podcasts, Star Trek