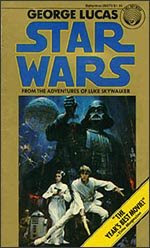 My latest contribution to Patti Abbott's Forgotten Books project. Go to her blog for all the rest.

If you watched "Star Wars" back in 1977, Jabba the Hutt didn't exist, there wasn't an Emperor, and Red Three (Biggs Darklighter) was just some guy with a mustache who seemed to know who Luke from sometime before our heroes boarded X-wings and attacked the Death Star. That's the way of movies: subtleties can be missed. If you were one of those newly born (hatched?) Star Wars geeks who devoured everything you could get your hands on, you knew the truth. And there was no better fount of wisdom than the novelization of the first movie.

There wasn't any of this "Episode IV" business. As far as we were concerned, this was the real Episode I. "Star Wars" opened up an entire galaxy of potential stories and adventures, aliens beyond our wildest dreams, and rouges and heroes we wanted to be. And for all the books about the concept art or the models being built, GeorgeLucas's novelization was the Bible. Everything was in there...including the scenes that didn't make the movie. And, to be honest, these scenes give the story arcs of Han and Luke much more resonance than just what we saw on the big screen.

Take Han Solo for example. In the book, the Jabba the Hut scene is present and accounted for. And, no, I didn't misspell "Hut." In the original novel, there was only one "T," not the usual double consonants in typical 70s SF (including that of ghost writer Alan Dean Foster). Except here,Jabba is humanoid. A fat, slothy humanoid but a biped nonetheless. He's surrounded the Millennium Falcon with him and his goons and Han and Chewie show up. They work out a deal: Han takes his new charters to their destination and, in return, Jabba gets an extra twenty percent. If you've seen the footage Lucas inserted in the 1997 special edition (SE), you'll know that Han talkedJabba down to fifteen percent. I can't remember if there were sub-titles for Jabba's dialogue in the SE but what you get in the book is Jabba threatening Han: "If you disappoint me again, if you trample my generosity in your mocking laughter, I'll put a price on your head so large you won't be able to go near a civilized system for the rest of your life, because on every one your name and face will be known to men who'll gladly cut your guts out for one-tenth of what I'll promise them." Wonder whatBoba Fett's cut was?

In little snippets like this quote from Jabba, you get that sense of wonder that only good SF can deliver. In this novelization, Lucas wrote a prologue. It's only a two-pager but it gives a brief history of the Republic and her protectors, the Jedi Knights. You could almost call it a query letter for the prequels. Here is the first mention of SenatorPalpatine , a man who became President of the Republic, then declared himself Emperor. Soon thereafter, in another difference from the three prequels,Palpatine becomes a recluse, ruled by "the very assistants and boot-lickers he had appointed." These soon-to-be tyrants exterminated the Jedi Knights "through treachery and deception" and set about controlling the galaxy. Lucas could have just written this prologue and be done with it. What he did that helped the sense of wonder was to attribute this text to the Journal of theWhills. That little subtlety also helped to make this novelization something special. It made it historical.

But it was Biggs Darklighter and his relationship to Luke that most moved Luke at the beginning of the story and the end and gave the novelization an added emotional impact lost in the movie. Many Star Wars fans were chagrined when Lucas did not reinsert these scenes in the special editions. I still don't know why. They speak so well to Luke's character.

From the ground, Luke sees the space battle above Tatoonie. Excited, he rushes to Anchorhead, the small town where his friends gather. While he's trying to get the gang outside, two things happen. One, they call Luke "Wormie" and, basically, deride him and his flights of fancy. Lucas gives the reader a clear sense that Luke is alone and has more acquaintances than real friends. Two, their old friendBiggs is back in town. Biggs and Luke were best friends until Biggs applied and was accepted to the Imperial Academy. The gang take a look and see nothing. They drift away.

A few scenes later, Biggs and Luke are swapping war stories when Biggs tells Luke the real reason he returned to their homeworld. He and some fellow students plan to join the Rebellion. Biggs can't tell his parents but he wants someone to know the truth if he never returns. Their exchange, back and forth, Luke incredulous that his happy-go-lucky friend has turned allserioius, Biggs exasperated that Luke had to withdraw his application to the Academy, illustrate the isolation Luke feels without his friend's constant presence and his longing to go where the action is. Without this scene,Biggs' death during the Battle of Yavin is without meaning. Biggs becomes just another red shirt, to borrow a Star Trek phrase.

One can choose to believe or not Lucas' claim that he had it all in his head from the get-go. Me? I tend to think he thought of Darth Vader and Anakin Skywalker as two different people and changed as the movies and stories wore on. One clue in the novelization was right before the final battle sequence when we do seeBiggs and Luke reunited. An older pilot, Blue Leader (Blue Leader in the book; Red Leader in the movie) approaches Biggs and Luke. "One of them he recognized. 'Aren't you Luke Skywalker ?'" Don't know about you but when I re-read that, I thought "Whoa! Did Luke's reputation precede him?" Apparently so. Take a read at this statement from Blue Leader. "I met your father once when I was just a boy, Luke. He was a great pilot. You'll do all right out there. If you've got half your father's skill, you'll do a damn sight better than all right." Again, I stress that little nuances like these lines bring so much more depth to the story than the two hour movie. There's history here, another sense that you're in the middle of something that's already started and will continue after you've stopped reading.

Back in the day, there was one other source for these scenes: the comic book adaptation. They illustrated the novelization, not the movie. Thus, we did get to "see" the deleted scenes withBiggs, see Jabba in a weird orange spacesuit and bizarre visage, and the rest of the deleted and extended scenes. The novelization, however, was where the imagination soared. It was the "first step into a larger world." You could smell the "hive of scum andvillany," you could feel the heat and sand of Tatoonie on your face, and you could, like Luke Skywalker, gaze at the setting of the dual suns and just dream....

Notes:
A guy has recreated the critical Biggs scenes and put them up on YouTube. Here they are. The music's a bit loud but it's all there.

I saw STAR WARS at a drive-in near Ithaca, NY in 1977 (on a double bill with LOGAN’s RUN) and clearly remember seeing the Bigg scenes. I bought this novelization the very next day and found the pages with Luke's friend to be the emotional core of the story. And then they disappeared. Thanks for the link, it was great seeing them after all this time.

I know this book is somewhere in the house from my kids reading it. I'll have a look.

I read a ton of the Star Wars books growing up, including this one. My memory of it is vague, however. I wonder if my copy is hidden away in my parents' basement somewhere. Hmmmm..... Potential project for next time I'm visiting: hunt down old Star Wars books.

Foster's later Star Wars novel about Luke and Leia on another planet has some interesting things that don't fit in with the canon. The book's so forgotten I can't remember its title!

Had to check: SPLINTER OF THE MIND'S EYE. Here's Wikipedia:

I had no idea the Biggs scenes even existed, or that Jabba was originally a humanoid. I always assumed the novelization was step-for-step with the film. Glad I read your review!

I too loved Star Wars as a kid - anyone remember the excellent novel - A SPLINTER IN THE MIND'S EYE which I think was an original story set in the Star Wars universe.

Whoops just noticed Juri's comment - teach me to read the other comments before making my own.

Oh, wow. Just seeing that cover took me back to elementary school, sitting in the car and reading while my mom was in the grocery store. I carried that book everywhere until I finished it. Then I read it again.

Michael, You should see the actual copy I still have. The spine is split down the middle, the 30-year-old Scotch tape having no more strength. A rubber band now holds it together. All the edges of the covers are tattered. But, it still smells great!

That describes my original copy pretty well (if I even still have it; it certainly describes it the last time I saw it). I eventually rebought it when they re-released it with the same cover (though the reprint had an ugly red star on the cover proclaiming something or other).

The big question is: do you still have the photo insert pages?

I meant to say this before, but I'm still haunted by the book's description of Darth Vader. For some reason "Two meters tall. Bipedal." is stuck in my brain and I think of it at the weirdest times.

Yes! I do have all the inserts. In fact, it is in the middle of the photo section where the spine is split.

And, thanks to my handy dandy palm pilot on which I have the original novel, comes this initial Vader description. Talk about a kick-ass opener and note the discrepancies now that we know the entire story.

"Two meters tall. Bipedal. Flowing black robes trailing from the figure and a face forever masked by a functional if bizarre black metal breath screen--a Dark Lord of the Sith was an awesome, threatening shape as it strode through the corridors of the rebel ship.

Fear followed the footsteps of all the Dark Lords. the cloud of evil which clung tight about this particular one was intense enough to cause hardened Imperial troops to back away, menacing enough to set them muttering nervously among themselves. Once-resolute rebel crew members ceased resisting, broke and ran in panic at the sight of the black armor--armor which, though black as it was, was not nearly as dark as the thoughts drifting through the mind within."

I just got a little chill reading that. SO sad that that's not the version of Vader we ended up with.

iservepharmacy said...
This comment has been removed by a blog administrator.
Tuesday, October 4, 2011 at 3:31:00 PM CDT