Grant the Mini-Series – A Popular Reassessment

As soon as I saw the commercials for History TV's mini-series, “Grant,” I knew I wanted to watch it. The big name attached to the project—Leonardo DiCaprio—wasn’t the draw. For me, it was the sight of actor Justin Salinger dressed as Ulysses S. Grant. From just the commercial, it felt like the 18th President was again alive. 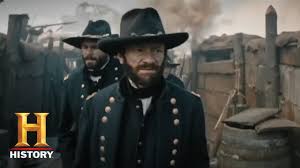 The excellent casting was a harbinger of how good this documentary is. Based on Ron Chernow’s 2017 biography, Grant, the six-hour mini-series examines the life of the hardscrabble man from Ohio via a series of on-camera historians discussing various aspects of the man and reenactments featuring Salinger. The high production values are on full display for most of these reenactments, especially the one involving the Civil War. It makes you want more. I could have easily watched another six hours.

The vast majority of the six-hour running time naturally is devoted to the war. What I especially appreciated was the reassessment of Chernow’s biography on full display here in this mini-series—not surprising considering he wrote the screenplay. I’m a degreed historian who wrote a thesis about the Civil War, but even I didn’t remember all the modernity Grant brought to bear when he assumed command of the Army of the Potomac in 1864. As Chernow and the historians note, Grant was the first modern general, one who could see the entire battlefield (nearly encompassing half a continent) and act in concert. I’ve often thought that had some of the generals from World War I learned lessons from the American Civil War, fewer soldier would have died in The Great War.

Winston Churchill remarked once that Americans can be counted on to do the right thing after every other option failed. Chernow made the point that Grant, having been a failure in his early military life and his civilian life before 1861, was almost the perfect choice for Abraham Lincoln. Unlike other generals, Grant had the fortitude to try something. If it failed, he tried something else. But at least he tried. True, failures from a general meant death, but it was war after all. I found it a nice reminder that for all the talk of Grant being a butcher, his losses often were less than Robert E. Lee’s.

As interesting as his war years are, I would have enjoyed more from his presidential years. That’s the forgotten part of Grant’s history. So many of us—if we remember Grant’s two-term presidency at all—think of the scandals, but there was so much more to it than that. The historians touched on major points, but I wanted more. Which, naturally, led me back to Chernow’s book. If you are reading this on the day I post this (29 May 2020), the Kindle edition is only $1.99. That’s two bucks for a thousand page biography.

But as the show ended, a remarkable thing occurred: I grew sad and somber. Mixed with Grant’s heroic struggle to keep the cancer at bay while writing his memoirs, the historians discussed how Grant’s admirable personal reputation has been diminished—sometimes actively—in the century and a half since Appomattox. I’m not sure why and how Chernow selected Grant as his subject, but I’m very appreciative that a reassessment has started.

And this mini-series is broadening the audience. It’s very well done and highly recommended.
at May 29, 2020
Email ThisBlogThis!Share to TwitterShare to FacebookShare to Pinterest
Labels: Civil War, History, Presidents, TV