Four Must Die: A Walt Slade Western by Bradford Scott 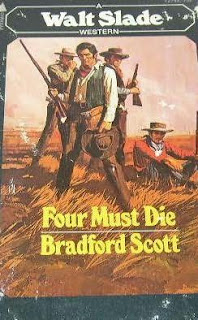 On a recent trip to East Texas, I stopped in Jefferson, Texas, and scoured a few antique stores. I found a motherlode of old paperback westerns, maybe two hundred or more, all for a dollar each. The issue was which ones to buy? I didn’t need any L’amour or Gray or Short, so I started judging the books by the cover art and cover blurb. FOUR MUST DIE was branded a Walt Slade Western. Something tickled the back of my brain enough that I bought it and read it on my vacation.

And I’m glad I did. I thoroughly enjoyed this novel.

As I am wont to do—please tell me I’m not alone in what I’m about to tell y’all—I saw a book by an author I’ve read and know (James Reasoner’s Death Head Crossing) so I propped it up for the next buyer to see. So charmed with myself, I took a picture and sent it to James. He thanked me, and then promptly started telling me about the other books in the photo! I told him via email that I very nearly called him to discuss what I was seeing because he has forgotten more about westerns than I’ll probably ever know.

He was the one who told me that FOUR MUST DIE was the last of the paperback originals in this series and the only one not written by Walt Slade’s creator, Leslie Scott. The real author of FOUR MUST DIE was Tom Curry, a fellow author who penned some Jim Hatfield novels prior to this. I have come to the conclusion that if there’s an old-school pulp writer that I want to learn a bit about—especially if it’s a western—all I have to do is google the author’s name and James’s name and there will likely be a blog post. Here’s one for some background on Leslie Scott.

Back to today’s forgotten book. FOUR MUST DIE shows Texas Ranger Walt Slade skulking around El Paso searching for Barney Hale, an outlaw with a peculiar set of instructions: he needs to kill four seemingly random men in the region. Slade muscles his way into Hale’s good graces and convinces the owlhoot that, Slade, can get the job done in half the time. Hale agrees, and Slade sets his plan in motion.

He knows these four men—the editor of the newspaper, a cattleman with land north of town, a worker in the land office, and the owner of a smelting plant—and gets them to vanish for a time until Slade can get to the bottom of this whole shebang. There’s an oily attorney, the Honorable Alton Z. Carson, behind the scheme that even Slade can’t figure out until a single word is uttered: “Gold.”
What follows is a flat-out joyride of a western. Slade is a fun character, quick on the draw and even quicker with his wits. He is tough as nails, but isn’t above actual manual labor in order to root out the bad guys. And I love his horse, Shadow. There’s a unique beast with a special way he runs when the bullets start zinging past them.

You remember me mentioning that tickling I had in the back of my brain when I saw FOUR MUST DIE in the store? Well, that’s because I inherited a Walt Slade book from my grandfather. I’ll be getting to that book next.

As James wrote to me, this was the last of the Walt Slade westerns. Fittingly, the last paragraph reads thus: "With a wave of his slim hand, Walt Slade mounted Shadow, and they [the men left behind] him ride away, to where duty called and high adventure beckoned." That's a great way to end a series...and a perfect starting point for someone like me.

FOUR MUST DIE is a well-written western and if it’s any indication of the type of story of all the other Walt Slade oaters out there, I just found me a new series to collect.

BTW, if you're interested, here is the photo I sent to James. 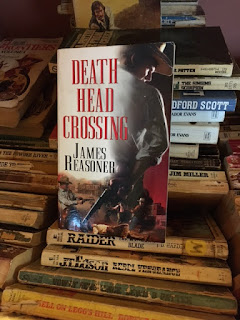 I've got Death's head crossing but haven't read it yet. Gonna look up the book you're talking about