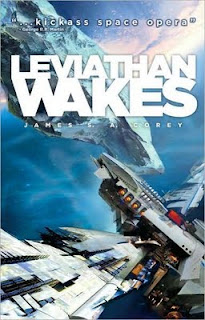 (This is the April 2013 edition of Barrie Summy's Book Review Club. For the complete list, click on the icon following this review.)

Let's get this out of the way at the start: Leviathan Wakes may be space opera, but it's not your grandfather's space opera.

Your granddad, if he were a mind, probably cut his teeth on Edgar Rice Burroughs, E. E. "Doc" Smith, Leigh Brackett, or any of the writers from the golden age of SF. Your dad probably cut his teeth on the likes of Michael Moorcock, Star Trek, Star Wars, or any of the things that have come in their wake. When you mention these authors or shows, certain things come to mind: spaceships, lasers, dreadful monsters, dashing heroes, and lots of derring do. Oh, and physics doesn't count because there's artificial gravity, warp drive, hyperspace, and all the usual stuff you associate with the genre.

Leviathan Wakes, then, is somewhat of a new animal. It's a space opera yarn for the 21st Century. It is not the only one, to be sure, but it is the first of its kind that I've read. Author James S. A. Corey (actually a pen name for the authors Daniel Abraham and Ty Franck) has set the first of a trilogy (aren't they all?) in the near distant future and entirely in our solar system. I say "near distant" because it's a few centuries away, but not far enough that all the parts of this universe isn't too far gone to be recognizable. By setting the entire story in our own solar system ensures the reader that the tale will be on the frontier, but a believable frontier complete with all the human problems that we early 21st Century citizens can understand.

The story follows two main characters. Jim Holden, Earth-born, is the executive officer on the ice hauler, Canterbury. The 'Cant' receives a distress call from the Scopuli and, under common practice, they answer it. Holden leads a crew of three on their smaller shuttle to investigate. They find evidence of piracy and attribute the origin to Mars. On their way back to the mothership, however, the Canterbury is attacked and destroyed. Distraught with emotion, Holden sends a message across the entire solar system that all but accuses Mars of being the perpetrators. Naturally, this stirs up some animosity between Earth, Mars, and the Belt (the asteroid belt between Mars and Jupiter).

The other main character is Miller, a police detective born and raised in the colonized asteroid Ceres. Granted, he's your typical noir-inflected character, but he's tasked with a new, off-the-books assignment: Find Julie Mao and bring her back, by any means necessary, to her parents.

Well, as it turns out, Julie was on the Scopuli, so, naturally, you pretty much have Miller and Holden angling on a collision course both between themselves and the entire system.

This book gets a lot of things right. This is space opera on the believable level. Yes, there are lasers, but not any photon torpedoes. There is no light speed and it really does take a long time to get from place to place. The characters experience G-force pressure when accelerating, nearly to a dangerously high level. Communication is not instantaneous. A "live" conversation has scores of minutes in lag time. The space combat is brutal and not without a comparison to old-style naval combat. All told, these characteristics of the story give this tale life, a vision of the future that you don't get from Star Trek.

Each chapter is told from the POV of either Miller or Holden. For the first third or so, they are separated, enabling the authors to comment on the events from a distance. Once the heroes meet up, the authors can show and tell of the events from the different POVs. Holden is an earnest man who believes that, if everyone knew all the facts, they would choose the right course of action. Miller is the cynic, the real world man who knows that is rarely the truth. Together, these two world views clash and strive towards the conclusion of the book.

Leviathan Wakes is satisfying on a host of levels, but none more than this: I've easily transitioned to the second novel of the trilogy (Caliban's War) and eagerly await the concluding volume later this summer. If you have a taste for blockbuster space opera in book form, Leviathan Wakes is your food. Devour it and enjoy.

I love space opera. Granddad or today. I made a note of this one, Scott. Thanks.

No better compliment than that you picked up the next book in the series.

I really enjoyed this space romp and cannot wait for more. If you like space opera's or like the lighter side of science fiction, than this book is for you... If you have been interested just click to have a peek at this web-site.