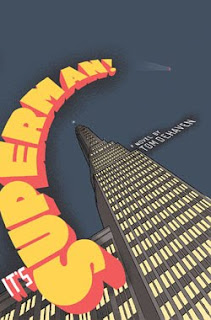 (This is the May 2011 entry for Barrie Summy's Book Review Club. For the complete list, click the icon at the end of this review.)

I've always been a Batman guy. Even as a kid, I gravitated towards the Caped Crusader with his more outlandish villains, his humanness, and his tales that seemed just a bit more real. As a kid, I loved Superman, but I liked him best when he was with other characters. My Superman comic collection fits in probably one-and-a-half comic book boxes (approx 250/box). My Batman collection spans three boxes at least, perhaps four. Even as an adult, I still kept up with Batman while Big Blue just seemed to fade away.

So how to explain the sudden desire, about a month ago, to read a Superman tale? The author, to be exact. Grant Morrison's All-Star Superman is just about the best Superman story I've read in a long time. Not hard to do considering I've not read a Supes story in years. Morrison recaptured that whimsical Superman pre-1986, when DC Comics rebooted Kal-el's story from the beginning.

But I've always wondered about Superman's true beginning. Since his debut was in 1938, that makes him a Depression-era hero. For all the years of telling and retelling his origin, writers have always tried to update Clark Kent's story. Where was the tale that put Clark back in the 1930s? Tom De Haven must have had the same question, but he answered it with his novel, It's Superman.

When you get right down to it, some of the best Superman stories are, in fact, Clark Kent stories. A good friend of mine--a member of my little SF book club--commented that, since Superman is so strong and so invulnerable, the only good Superman story is an origin story. He might have something there. Case in point: TV's "Smallville" has stretched Clark's discovery of his alter ego over ten years. Jeph Loeb captured an excellent, modern retelling of Clark's story with "Superman: For All Seasons." But not since the Depression has there been a good, honest story about Clark Kent and Superman in the 1930s.

Superman, as created by Jerry Siegel and Joe Shuster, is an American story of the Depression. Tom De Haven captures the look, the feel, the smells, the sounds of the Depression with intimate detail. Not hardly a page goes by without some reference to how we lived in the middle of the 1930s. It served as a wonderful touchstone to the types of lives that Siegel and Shuster lived as they created the first, great superhero. To be honest, this tale is more pulp than SF. Heck, it's almost Steinbeckian in its slowness and non-action.

Not that that's a bad thing. De Haven allows all the characters to breath on their own. The story is the origin of how Clark went from a farm boy in Kansas to a reporter and superhero in New York. And, yes, De Haven sets the story in NYC, not the fictional Metropolis. It's yet another piece that makes the story of this alien more real.

Lois Lane and Lex Luthor play their obligatory roles. Lois is almost the most fully realized character in the book. She is not some modern 2011 woman trapped in the 1930s, complete with winks and nods to us 21st Century readers. She is a modern, 1930s-era woman. She wants to be taken seriously as a reporter--something the male reporters don't do--but, also, upon meeting one character, tries out his last name with her own first name, wondering about marriage and kids.

Lex is fabulous. This isn't the mad scientist of the Silver Age of Superman's history. Lex, now, is more in line with the post-1986 rebooting of the character: a rich, brilliantly intelligent man, an Alderman, and a gangster. He doesn't want to rule the world, he just wants to rule the organized crime groups in NYC. Unlike Clark, Lex knows that his intelligence makes him an outsider among the more "normal" people.

Lex's brains is a nice counterpoint to Clark's brawn, a usual aspect of Superman stories. But, in this retelling, Clark isn't very smart, constantly doubting what he should do. In fact, it is Clark's constant questioning of his powers that, depending on what kind of story you want, will sway you one way or the other. For those of y'all (like another member of my book club) who read the word "Superman" on the cover and wait for Superman to do something super, you'll be disappointed. For those of y'all (like me) who enjoys the human side of Clark's story, this novel will be right up your alley. In the world of 2011, if one discovers one has superpowers, we'd likely try to get a TV deal. For someone like the Clark Kent of the 1930s, he almost doesn't know what to do.

Superman, like Batman, James Bond, and various animated characters, has adapted as the decades have passed. With my reading of It's Superman coming around the 900th issue* of Action Comics--the comic where Superman debuted--and it's modern, super-smart, SF version of Superman, it's fascinating to read a novel that takes Clark/Superman all the way back to his beginning.

*Don't let the news-making storyline of Superman renouncing his American citizenship rankle you too much. It wasn't a part of the main story and, frankly, I'm wondering if this little short story isn't truly canon. Another thing about the actual citizenship story: the end panels show Supes flying away after standing in the plaza of Tehran (I think) for a day. As he flies away, leaving only the protesters and the soldiers, one protester gives one soldier a flower. The one soldier lowers his weapon. It's almost as if the author is saying Iran 2011 equals USA 1970. It's really ironic that everyone's so up in arms over this one, potentially uncanonical story that, in the end, symbolizes American ideals anyway.

Click icon for more
book review blogs
@Barrie Summy
at May 04, 2011
Email ThisBlogThis!Share to TwitterShare to FacebookShare to Pinterest

For me, it's always been about Superman. I don't think I'll ever forget the poster for Superman: The Movie--You'll Believe A Man Can Fly. I still remember seeing that in the theatre. And I did, I believed a man can fly.

Grant Morrison's All-Star Superman is absolutely astounding. Just marvelous. It's beautifully character driven (which is I think the only way to tell a decent Superman story) and especially impressive since Morrison managed to take all the silly things that have existed throughout Supes' 70 plus years (Krypto the Superdog, the city in a bottle, Bizarro) and invest them with a life and a purpose beyond their groan-inducing cheese.

The thing that has stuck with me though, about All-Star, is the issue with the goth girl who's going to commit suicide. That single issue right there is the essence of Superman for me.

That is true--about Clark Kent being more interesting. Superman should have had a more everyday flaw-Krytonite is too remote. But I like him the best too. He inhabits a world I understand. He is brave without being full of himself.

What you say about the Clark side of Kal-El being more interesting than the Superman side is quite true.

I've noticed many comic fans are saying the same about Geoff Johns portrayal of Barry Allen/The Flash since his "resurrection." The bits with Barry trying to explain his long absence to his colleagues on the Central City PD and seeing him react to how much the world changed in his long absence have been much more interesting than his bits as The Flash. In fact most of us Flash fans have felt his return as The Flash to be somewhat anti-cilimactic (many of us, myself included, would much preferred to have had Wally West remain The Flash).