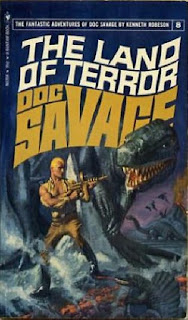 Doc Savage and dinosaurs. Do you need any other enticement to read this book?

The Land of Terror was the second Doc Savage novel, published in April 1933, a mere month after Doc’s debut in print. It’s an interesting time to have a new superhero to follow. The Great Depression was in full swing, America had a new president, and pulp novels and stories were in great demand.

Never one to waste time, author Lester Dent (writing under the house name Kenneth Robeson), launches the story in a single paragraph. Jerome Coffern, chemist and friend of Doc, is murdered by a poison gas dubbed the Smoke of Eternity. This isn’t some supernatural creature; this is a weapon shot from a gun. The end result of a Smoke of Eternity strike is the body completely dissolving save for a forearm that extended outside the cloud. Doc, of course, was waiting for Coffern and chases the thugs who killed his friend. After a scuffle, Clark Savage, Jr., determines the men worked for a criminal mastermind (is there any other kind?) nicknamed Kar. He is responsible for creating this death cloud and weaponizing it.

Now, judging by the cover image posted above (from the Bantam edition), you’d be expecting Doc and his Fabulous Five Friends to get to wherever the dinosaurs are as soon as possible. Oddly, you don’t. More than half the book is spent with Doc investigating clues to discover more truths about Kar, why he wanted to kill Coffern, and all sorts of other dastardly deeds. Along the way, the team picks up Oliver Wording Bittman, a taxidermist who saved Doc’s father sometime before. Together, all seven men fly across the continent and land on a South Pacific island named Thunder Island. It’s the source for the chemicals used to make the Smoke of Eternity. Oh, and there are dinosaurs.

Doc saves the day and constantly saves his friends, too. Hey! I didn’t give anything away. There are still 179 more books to read, okay. How he does it never fails to impress and entertain. There’s a big plot twist my 2010-era brain saw coming miles away but it’s still fun to see it play out.

The body count in this novel is higher than in the debut novel. Doc gets mad and kills the criminals—usually in self-defense—but he also kills some of the dinosaurs. I’ve read elsewhere that Lester Dent toned down the violence in subsequent books. I was okay with the violence here, especially given the era in which it was written. Things were bleak in early 1933. Sometimes, our entertainment merely mirrors what’s already in the world. That would include some of the cultural biases of white folks against native Pacific islanders. I don’t hold that against Dent. It was the time, after all.

This book is quick, escapist, adventure-filled fun. You don’t need a lot of brain cells to enjoy this stuff. Just sit back and enjoy the ride. Adventure House publishes two novels in a single volume. They also include historical essays and background information on Dent, Doc Savage, or other pertinent subjects. Plus, you get the black-and-white illustrations to boot. I’ll easily be reading more adventures in the coming months and years.
at April 16, 2010
Email ThisBlogThis!Share to TwitterShare to FacebookShare to Pinterest
Labels: Doc Savage, Friday's Forgotten Books, Pulp Fiction, Pulp heroes

A fun review, Scott. I read this paperback when it first hit the stands (along with most others in the series) and loved it. Sure, the plots and characters were cool, but it was Dent's voice that impressed me most. His wry wit was an exhilarating change from the stodgy crap we had to read in school.

You'll find that in the later books, criminals were sent to Doc's "college" where a simple "brain operation" cures them of their illegal thoughts, turning them into productive citizens.

I read this in the first of the double Doc reprints that began a few years ago. My not always reliable memory tells me I liked the first book better, and some of the later ones a lot better, but that may be because the dino-excitement wasn't there for me after reading so many other dinosaur themed novels over the years and seeing films, especially Jurassic Park. The book does have a bit of a ERB feel to it, I think.

Yes, this brings back plenty of memories. I enjoyed reading Doc Savage. When Nostalgia Press stopped reprinting Doc Savage and The Shadow, I was saddened.

Richard - I also liked the first book better. Will have to see how Book #3 is in relation to the first two.

George - I have to say that I bought my copy from Half Price Books. They always have many, many volumes of Doc and, also, the Shadow.