The Others by Jeremy Robinson 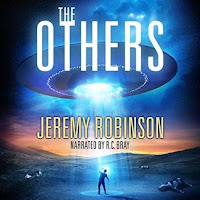 It's not often a writer can bring something fresh to a trope, but Jeremy Robinson did.

A PI in a SF Tale


Dan Delgado is a private investigator who specializes in the usual things: cheating spouses, missing people, digging up dirt on corporations. In a former life, he was a San Francisco police detective, work he enjoys quite a bit more. He's widowed. And, as a secretary, he has Wini, a no-nonsense lady fond of tight skirts for her middle-aged body.

Then he gets a call: an illegal immigrant frantically calls and wants Delgado's help. Her daughter has gone missing. She can't go to the police or she'll be deported. Delgado and Wink go to the lady's house, but can find no trace of her or her missing daughter.

But they certainly hear the deep thwumps of helicopter blades. And there's a warning on his phone. It tells him to flee. Now.


Thus begins THE OTHERS by Jeremy Robinson. It's a standalone book, unlike PROJECT: NEMESIS, another book I've read with my science fiction book club. One of the things the five of us often discuss is how so many books are always firsts in a series. Nothing wrong with that, especially from a selling perspective. But every now and then, it's good to read a standalone, a one-and-done book. That's what makes THE OTHERS so good.

Delgado is a likable protagonist. You know exactly what makes him tick, what kind of man he is, and, as the story goes on and things go from bad to worse to really messed up, you can guess his decisions even before he makes them. I say that not as a critique, but as an example of how well written Delgado is.

All of the characters get this treatment. You never leave Delgado's POV, but you know how he feels about them and it's all based on these other characters' decisions and actions. There were a couple of moments when I thought "Well, isn't that little tidbit a little to easy on the plot?" Turns out, Delgado thought the same thing, and then he learns the reality behind said action.


As good as it is to have a one-and-done book, it's also pretty neat to have a new-to-me approach to the whole UFO and abduction phenomena. I'll say nothing more here because the discovery is well worth the wait, but in my limited knowledge of UFOology, Robinson's idea is quite reasonable and understandable.

Action With Thought and Heart


There's quite a bit of action in this story. It would make a terrific tentpole summer movie, best released the week after Independence Day when the summer's just scorching and you just want to recline in air-conditioned comfort and be shown something new.

But that action isn't devoid of meaning. Delgado and his make-shift family ponder big ideas and big decisions not with a pithy one-liner from a movie, but genuine feeling and worry. I enjoyed him as a protagonist...but do not need a series. Just leave it be.

The narrator of the audiobook, R. C. Bray, was great, really giving Delgado's character a no BS vibe. I found myself actively finding things to do around the house just so I could plug in the earbuds and listen.

My book club pals and I grade our books on a standard school letter grade. There was little I disliked. I give THE OTHERS an A.

Head over to Jeremy's site for a preview.
at May 13, 2019
Email ThisBlogThis!Share to TwitterShare to FacebookShare to Pinterest
Labels: book review, SF