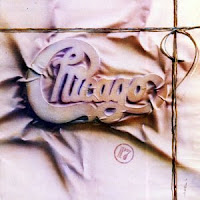 Thirty five years ago today, I was not even aware of the band Chicago, so I had no clue about their seventeenth album. But when I finally discovered them the next year, Chicago 17 was the first record I bought.

The New Approach Paid Off


Chicago 17 was the second album produced by David Foster. He had come on board for 1982's Chicago 16, changing the band's sound to match the new trends for the 1980s. I've often wondered what it was like for long time fans to hear the opening song from 16, "What You're Missing," and the brand-new, polished, and slick style. That record included "Hard To Say I'm Sorry," the mega hit, so when it came time to record 17, the band did more of the same.

Singer and bassist Peter Cetera was again front and center, co-writing five of the ten tracks. He either sings lead or is featured on seven of the album's songs. Foster knew how to make hit records, however, so no matter the costs, the band continued to ride their wave of popularity, this time to an even greater degree.

The Songs: Side One


"Stay the Night" opens the albums with drummer Danny Serephine's snare hits, laced, as probably every drum sound was in the 80s, with reverb galore. The propulsive song, with quarter-note synthesizer, was the first single, a brave move considering the band was probably most known for ballads by the spring of 1984. Absent from this tune are the trademark Chicago horns, but guitarist Chris Pinnick really nails the solo, which could have been featured on any pop metal track that year.

"We Can Stop the Hurtin'' comes next and with it, the return of the types of songs featured early in the band's career: Robert Lamm as a vocalist, his social consciousness, and the Chicago horns: Walt Parazaider on sax, Jimmy Pankow on trombone, and Lee  Loughnane on trumpet. This is a traditional Chicago song, just filtered through the all the current trends of the 1980s: sequenced drums and synths. Even when I first heard 17 back in 1985, I knew the hits, but it was songs like "We Can Stop the Hurtin'" to which the band geek that I was gravitated. Again, for those fans from the early days, this must have been a welcome sound.

"Hard Habit to Break" was the second single and the first duet of the album. Cetera trades vocals with soulful Bill Champlin who had joined the band in 1981 to fill the deeper soulful voice vacancy of Terry Kath. While not written by any member of Chicago, it included all the best elements of the band for an excellent ballad that, over the years, became my preferred ballad from this record. Everything an 80s ballad needs is in this song.

"Only You" is that rare Lamm/Champlin duet. Throw in Cetera's prominent voice for a few transitional phrases and you have a triple vocal, another hallmark of the early years of the band. (I'm thinking "What is This World Comin' To?" from Chicago VI) Given the fact Cetera leaves after this album and "Only You" is the only triple vocal from this line up. The horn break is slight, but at least it's there. A nice album track, but, alas, the last time we'll hear Lamm's voice in the lead. Interestingly, as I've listened again to this album while writing this review, this is the song I keep singing.

Side one concludes with another ballad, "Remember the Feeling." Here, Foster and Cetera and in full-on ballad mode, with lush strings and solo piano. Say what you want about the band's direction and the choices they made, but Cetera can belt out a ballad performance with the best singers out there. One aspect I've grown annoyed with over the years--and it's not just Chicago that does this--is to have lead singer Cetera be his own backing singer. I would have enjoyed hearing Champlin and Lamm's voices (like you do with Hard Habit to Break) adding warmth to Cetera's crystal clear tenor. I've always linked this song with Chicago 16's "Love Me Tomorrow." Not sure why.

The Songs: Side Two


Starting off the second side with another uptempo song, Chicago again reminds listeners that they can do things other than slow songs and do it well. "Along Comes a Woman" is a stripped down tune, full of Serephine's sixteenth-note hit hat keeping things moving along. When you listen with headphones, you can hear Pinnick's guitar mimicking Cetera's vocals in the verse. It's a rather simple tune that I've always loved, especially the horn break.

It's also my favorite video the band ever made. Chicago did not make great videos, but in the MTV era, they had to. "Stay the Night" was humorous, but with "Along Comes a Woman," it was a take off the movie Casablanca with Cetera as Bogart.

"You're the Inspiration" was the massive hit off this album, and it's about as 80s as you can imagine. This tune would have been at home on any movie soundtrack. 80s synths, power ballad guitars, that particular riff, and Cetera's vocals all combine for a great song. For me, it's not one I return to often, but when I do, boy am I thrilled to hear it. This song is probably the textbook case of how to make a soft-rock ballad, complete with key change. In 1997, the group Az-Yet re-recorded the song, bringing their harmonies to bear, and it is glorious, especially the version where Cetera joins them.

"Please Hold On" was the first song I could remember actually having different versions on the CD and the LP. I owned both back in the day, and always attributed it to the space considerations on the actual LP. I prefer the longer version (only a bridge), but this is a terrific Champlin song. Propulsive with the synth bass, soulful in delivery, and featuring the horns, this is a tune that I always think about when I think of 17. It's one of my favorite Champlin-in-Chicago songs.

"Prima Donna" is an uptempo, guitar-driven song that fans of the band circa 1972 might've recognized as Chicago. Cetera sings lead and the horns are all over the place. Over the years, I've found myself drawn more to the faster songs rather than the ballads, and when I make a compilation CD or a playlist, this tune (most of the time) makes the cut.

"Once in a Lifetime" is a very 80s, synth-heavy song that nevertheless sounds like Chicago. Champlin sings on the verses while Cetera takes the choruses. You've even got a power ballad guitar in the mix, and the horns get one last good horn break that, one realizes, bears more than a passing resemblance to the horn breaks of "Here With Me" (1992) and "Free" (2006). Well, when something is good, it's always good. Great way to end an album.


I've mentioned here before that I discovered Chicago in 1985 via the first greatest hits collection. Once I heard this band, I knew I wanted more. Turned out I already owned Chicago 17. How? Well, remember the days of the Columbia music service? You got 12 albums for a penny. Somehow, I ended up picking (or was given? The memory is hazy) Chicago 17, but hadn't listened to the album yet. What this likely tells me is that must have heard one of the songs on the radio and got the album. But I never put two and two together. Weird. Later in the 80s, I ended up getting the CD, but felt no compunction to get the remastered version in 2006.

How Chicago 17 Stacks Up


Chicago 17 is the biggest album of the band's career. Arguably, it gave them the push they needed to keep making records. I think it's safe to assume the band would have continued touring, but the success of 17 enabled them to maintain a formula for the rest of the 1980s. Granted, they'd tire of the formula and try for something different (Stone of Sisyphus) and we know how that turned out.

In the 1980s, I preferred the sound of the band at that time, but as time went on, I gravitated away from the 80s sound. My favorite 80s record is Chicago 19, and I rank it in my Top 5 with CTA, II, V, and SOS. But Chicago 17 was the perfect album for the band at the perfect time. They built upon the successful re-imagining of themselves with Chicago 16 and continued it with Chicago 18. Of the three David Foster produced albums, I prefer 17 the most (although my heart is with 18, the first new record after I discovered the band). The production is crystal clear, not muddy, and I've quite enjoyed listening to it as a whole this week.

Yes, one can grumble at the lack or horns or Lamm's vocals or Cetera backing himself, but given where the band was in 1983-84, this was a great group of musicians working to make the best possible songs. And they knocked it out of the park. I can't imagine anyone who loves the music of not only the 1980s but Chicago itself not enjoying Chicago 17.