Podcast Review: Fatman Beyond (AKA FatMan on Batman) 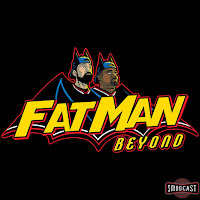 "Our Batman, who art in Gotham, cowl be thy mane."

Those were the first words I heard from podcaster Kevin Smith back in 2012. You might note I used the word "podcaster" to describe him. Well, for me, that's the more accurate description. The irony of my relationship with Kevin Smith is I've never seen one of his films, yet I listen eagerly to all his podcasts. Heck, I've even gone and seen him live in a truly inspirational show.

But it all began with Batman


If you read yesterday's post about how I discovered The Ralph Report, then you know I discovered Kevin Smith because of a podcast interview he had with Mark Hamill back in 2012. That podcast was the original "Fat Man on Batman." When I first learned of this podcast, I was ecstatic. A whole podcast just on Batman? And with a celebrity who could snag interviews with other celebrities? How fun would this be?

Turns out, way more fun than you could possibly imagine.

On the original incarnation, Smith would interview his guests, paying particular attention to how that person arrived in the Bat-universe. To be honest, those are my favorite parts. How did Mark Hamill become the voice of the Joker? But not the audition part. All the other stuff he experienced growing up, loving the things we all love, and making his way to acting, Star Wars, and finally auditioning for the part. Ditto for other guests those early episodes: Tara Strong, Paul Dini, Bruce Timm, and others. I remember recovering from a stomach bug on a vacation in 2012 listening to Batman himself, Kevin Conroy, talk about his early acting days. As soon as I discovered Fat Man on Batman, it shot to the top of my favorite podcast list.

What makes Smith a great interviewer is his fandom. He's not even two years younger than I am, so his life with Batman and comics mirrors my own. He asks the questions I want answered because we're both Bronze Age Boys. His optimistic enthusiasm for all things geek is infectious. He puts good back into the world.

One episode in particular was really special. Episode 51 had Paul Dini as a guest. Along the way, the pair stumble on what they bill as the greatest Batman TV series you never saw. It was spectacular. I've listened at least a half dozen times, partly to soak in all the details of this would-have-been-awesome TV show, but also to get a glimpse of two writers creating on the spot. I'm always fascinated about how writers create their stories and this discussion was spectacular.


Over the years, Smith expanded the types of interviews he did. Not content with just Batman, he interviewed Marvel's Kevin Feige, Andrew Kreisberg from The Flash TV show, Geoff Johns, and Brad Meltzer among others.

One guest, however, stayed.


Writer Marc Bernardin is another name I didn't recognize when he showed up on the podcast, but I should have. As a subscriber of Entertainment Weekly since forever, I never put two and two together to realize he wrote for the magazine. By the time he landed on the podcast, he wrote for The Hollywood Reporter. As Smith constantly says, Marc's the one who brings gravitas to the show.

From a one-man show, the podcast evolved to a two-man show not limited to Gotham City. It became a look at many things geek related, be it movies, TV, or comic books. The chemistry between the two soon developed. Kevin follows a guideline I tend to adhere to: if you love it, talk about it. If you don't, either say nothing or not a lot. Marc is more critical, but he has a phenomenal way of drilling down a story to its core, usually in a way I or Kevin or however many listeners never before saw. He tells you what a story is "about" in such a way that is at once so obvious yet it makes you wonder why you didn't see it on your own. He also has a way of weaving together say, pieces of a trailer, into an predicted story about a movie coming out. I remember quite clearly his vision of Rogue One before the film's premier. As good as Rogue One ended up being, the story Marc wove would have been awesome.


Somewhere along the way, DC Comics finally forced Kevin to change the name of his podcast. Plus Kevin had a heart attack, forcing him to change his diet. He got thin, and even if the corporate giant didn't mandate the change, he might've changed the name anyway. Still keeping with the Batman theme, it is now called Fatman Beyond.

But whatever name it goes by, this podcast by Kevin Smith and Marc Barnardin is a must-listen experience. It's one of my favorites, and whenever there's a new episode, that installment vaults to the top of the list. Just last week, they spent nearly 2.5 hours talking about Endgame, Game of Thrones, and other awesome content in the world of geek culture.

...for a go-to podcast for film-related interviews.
at May 07, 2019
Email ThisBlogThis!Share to TwitterShare to FacebookShare to Pinterest
Labels: Batman, Kevin Smith, Marc Bernardin, Mark Hamill, Podcasts