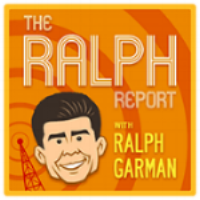 If it wasn't for Luke Skywalker, I would never have discovered Ralph Garman.

How I Got There


Seven years ago, I was listening to an episode of the SF Signal podcast about Batman when one of the panelists referred to a then-recent interview with Mark Hamill on a separate podcast. I wrote down the name of that other podcast: "Fat Man on Batman" by a guy named Kevin Smith. Didn't have a clue about Smith, but I headed over and downloaded the Mark Hamill episode. Over two episodes, I listened enthralled to Hamill talk about his life and origin story, mixed in with Smith's questions about Batman. When I finished those episodes, I was hooked on this new-to-me podcast devoted entirely to Batman. It was awesome.

I binged all the available episodes including episode 9 when the guest was a friend of Smith's, Ralph Garman. In Ralph's discussion of his origin story, he talked about how huge a Batman '66 fan he was. What sold me was him telling the story of his mom making not only a Batman Halloween costume but a better-than-you-could-buy Batcave playset for his Mego action figures. The humor and relationship between Smith and Garman was palpable and that led me to the show they do together, Hollywood Babble On. It is profane, irreverent, and hilarious.

After Garman was unceremoniously fired from his twenty-year radio gig in November 2017, Smith convinced Garman to create his own show and work on his own terms. At the same time, I was also in a tenuous employment situation and, being a dad, I understood Garman's predicament. So, when he announced he would be creating a new podcast show available on Patreon, and having enjoyed Hollywood Babble On for years, I easily made the decision to subscribe to The Ralph Report.

And I've enjoyed every episode.

What Is The Ralph Report


Monday through Friday, Garman produces an hour-long show every day. The episodes are available around 5:00 a.m. PST so his long-time Los Angeles radio fans can continue to have his voice in their cars during the morning commutes. For me, he is the voice I hear on my drive home in the afternoons. I am usually not even out my office door before the opening notes of his theme song are bursting from my iPhone. He is appointment listening every single weekday.

At the beginning of the series, Garman was the sole host of the show except for when he would have in-depth interviews. He would look at the day's entertainment news and provide his own brand of acerbic commentary. Without the filter of live radio, Garman freely uses all the adult words you can think of, and probably a few more.

His devoted listeners, dubbed the Garmy, actively participate by leaving voice messages or sending emails. He reads them or plays excerpts on the show, reacting to them along the way. It was the listeners who suggested Garman find a co-host with whom he can chat and to which he can respond. Enter stand-up comedian Eddie Pence. With these two in place, The Ralph Report went to eleven.

Highlights of Any Given Episode


Holiday or Holi-nay - Where Ralph and Eddie take a look at certain holidays associated with a particular day and discuss whether it's bogus or not. Of particular interest are all the food-related holidays because Eddie has an interesting taste palette and you just never know what Eddie will or won't eat.

TV Tunes Tuesday - Where Ralph and Eddie play an old TV theme song, usually suggested by the Garmy, and talk about it. Here, Ralph does some background research, often uncovering some interesting nugget for the next trivia night.

One Hit Wonder Wednesday - Same concept, but for songs. Sometimes, he'll get his celebrity guests to namedrop their favorite one-hit wonder.

Eddie's Drunk Thoughts - By happenstance, one listener observed that when the podcast is slowed down to half speed, non-drinker Eddie sounds like a drunk at the end of the bar, talking to no one and anyone. It's true, and it's one of the funniest bits on the show. Heck, even the jingle associated with the segment makes me laugh.


For these bits and more, members of the Garmy write little musical jingles that Ralph tacks on at the beginning or ending of the segments. These jingles even have passionate fans. Heck, even some of the frequent callers have fans. It's really a community.

There's a camaraderie and respect between Ralph and Eddie that comes through the speakers. And that respect is extended to the listeners and supporters of the show. Everyone may joke about Eddie's particular eating habits, but recently, the Garmy came out and supported Eddie in his bid to record his act and prepare it to make a show.

Moreover, when there's a cause near and dear to their hearts, all joking vanishes and sincerity prevails. Lots of the content may come at you wrapped in profanity, but underneath, The Ralph Report's real gift is in its big-hearted host.

The Art of the Hustle


Ralph is a few years older than I am. As many of us grow older and near the proverbial retirement age, we fantasize about taking it easy. Even in our day jobs, we may not want to do as much hard work as we did in our thirties or forties. We want the cushy position where you can do half the work but get all the perks.

That hand wasn't dealt to Ralph. Imagine yourself at age fifty-three being fired from your long-time gig and having a wife and child to support to say nothing about the usual bills. What would you do?

The answer is whatever it takes. Ralph Garman picked himself up after having been knocked down and carved out a place for himself amid all the options we have to consume. It wasn't easy. It never is. He hustled, learning whatever he needed to learn, to create, from scratch, this daily podcast we listeners can enjoy. He might even work longer hours than he did on the radio, but he did whatever it took to get The Ralph Report up and running and into the small, independent business is to support his family.

As a indie writer who created a business to publish my own books, Ralph Garman's story is inspirational, and I happily support The Ralph Report.


...for a little Batman talk.
at May 06, 2019
Email ThisBlogThis!Share to TwitterShare to FacebookShare to Pinterest
Labels: Kevin Smith, Podcasts, Ralph Garman