My Gen-X History with Batman

This month marks the 80th anniversary of Batman's first appearance, and today is when Detective Comics #1,000 will be published. I'll be stopping by my local comic shop today to pick up a few copies--darn you variant covers!--and having a good read tonight. Head to your comic store today and join in on the celebration.

Batman has been around for eighty years. Everyone has a story of how they were introduced to Batman. This is mine.


I was born in the last year of the Batman ‘66 TV series. Debuting in 1966, the Batman TV show with Adam West as the Caped Crusader and Burt Ward as Robin was a massive pop culture touchstone. By the time the 1970s rolled around, the show was in syndication, usually on one of the various UHF channels around the country. In Houston, it was Channel 39. As best as I can remember, Batman was on weekday afternoons. He was one of the shows I’d watch when I came home from school. Since we had a color TV, I got to absorb all the technicolor brilliance of the show. 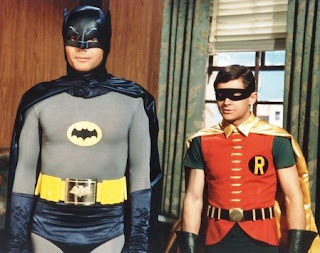 Tell me if this sounds familiar: as a kid, I knew the show was funny, but I didn’t get the high camp under I grew older. No, as a youth, there was Batman, battling evil-doers yet always finding time to instruct Robin in the proper way to act and live one’s life. He was always teaching. I had great parent and grandparents so I had good role models in real life, but it was also neat to have someone like West’s Batman telling me additional things about life.

Oh, and am I the only one who thought Robin was a goner when the giant clam swallowed him whole, leaving only his twitching green-shoe-clad foot exposed?

A highlight was when the same channel would broadcast the 1966 Batman movie. Here, for a full two hours, our heroes fought the fearsome four of Joker, Riddler, Catwoman, and Penguin. Every Sunday, when the Houston Post would publish their TV guide for the week, I would read through it with pen in hand. I'd circle all the shows I'd want to watch, paying special attention to Friday night's movie on Channel 39. It was a great week when the Batman movie would play.


If I’m being honest, the Saturday morning cartoon, the Super Friends, was probably my next iteration of Batman and Robin. The Dynamic Duo fought for truth and justice alongside Superman, Wonder Woman, and Aquaman. The teenaged sidekicks were Wendy and Marvin and their "Scooby," Wonder Dog. With animation, you were able to tell stories above and beyond the limitations of live action. The show came on around 7:00am or 7:30am so I’d have to make a point to wake up early enough to catch the animated Justice League. I did most Saturdays.


By the time I was aware of things and asking for specific toys, Mego had begun producing dolls, er, action figures. I had quite a few of them. It's remarkable in this day and age when Marvel and DC are so separate to think that one company produced these dolls and often advertised with Batman and Spider-Man, to say nothing of Joker and The Lizard. Those dolls were fantastic because you got to make up your own stories.

And who didn't want Mego's The Batcave? It was too expensive for my family, but my mom took a cardboard box and created my own Batcave to play with. I can't remember my reaction back in the day, but I played with that thing. Who else's mom did the same thing? 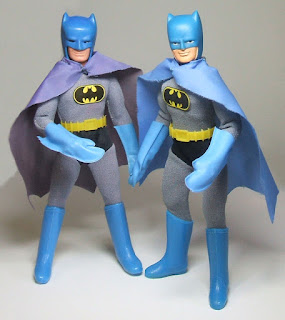 
Again, with the murkiness of time, I finally figured out that the Batman on TV was the same Batman I saw on comic books sitting in the spinner racks at grocery stores, drug stores, and corner convenience stores. My parents are readers so anything I read was likely good with them. And I devoured comics. It wasn't just Batman, but judging by the sheer number of Batman comics I still own, he was always my favorite.

Of all the titles, however, it was The Brave and the Bold that I enjoyed most. A staple of the 1970s, Brave and Bold was the team-up title where the Caped Crusader would join forces with another member of the DC Universe and battle some villain. With World's Finest teaming up Batman and Superman, this was my introduction to the wider character list DC had in the vaults.

Brave and Bold played a crucial role in solidifying, for me, my favorite Batman artist. Jim Aparo was the lead artist after a certain date. He drew most covers and most interiors. His was the name I first started associating with Batman, and it would be interesting those times when Aparo did the cover but some other artist did the interior work. He drew Batman as a lean fighting figure, with just enough of a cape to be fearsome but not overly dramatic. 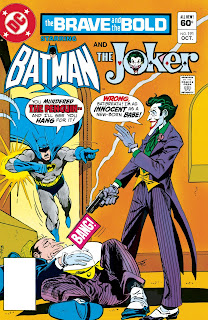 By the late 70s and into the 80s, the growth of comic stores meant I didn't have to rely on a nearby Stop n Go to maybe have the latest issue. Here in Houston, it was Roy's Memory Shop over on Bissonett. A couple of years ago, I got to meet the man himself. No doubt my story was much like others he heard.


One of the reasons I like my history of Batman during my specific lifetime was when I hit the higher teen years, Batman got darker. In 1986, Frank Miller's The Dark Knight Returns was published. It was a massive hit. For better or worse, it showed a "real world" Batman who did what he likely always did if only you stopped to think about it. When he fought, he broke hands and arms. Gone, seemingly, was the other famous nickname, The Dark Knight Detective. Here was a brute of a man ready to punch out the lights of anyone who crossed him.

Seriously, can you imagine this image being published at any other time? 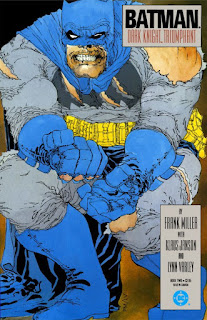 Frank Miller's story, along with his Year One tale, ushered in the dark phase of Batman's career. It also brought us our first major motion picture.


I have written before about the massive pop culture moment the 1989 Batman film was. In the spring of 1989, I snatched up everything in the newsstands about this movie. Starlog magazine ran a feature story. Heck, I saw the first Bill and Ted's movie just because the trailer ran before it.

I worked in a movie theater that glorious summer of 1989. Ever since then, the true Batman Day for me is June 23. Here's my take. Thanks Michael Uslan!

On television, the excellent Batman: The Animated Series debuted. Taking Tim Burton's vibe from his two movies, this was a dark version of Batman, but, crucially, it retained lighter elements. There's a reason why many folks consider this version of Batman to be definitive on screen.

The Burton era segued into the Joel Schumacher era. I enjoyed Batman Forever--especially Jim Carrey's Riddler--but the fourth film, Batman and Robin, even I didn't like at the time. It got me to thinking: If this is the kind of Batman movie they're going to make, then just don't make any. They didn't for a few years. Then Batman returned to the screen.


By 2005, I was only buying the major titles in the comics, usually in trade paperback editions. With the cover prices going up--and the writer's desire to tell good stories that took up many issues--it was a more cost-effective way to consume Batman stories. Besides, much of the way Batman was portrayed was the grim, unsmiling Bat-God who could anticipate anyone's next dozen moves. Some of the stories were great (Hush) while others I can barely remember.

But there was a new movie on the horizon and it looked great. Batman Begins snuck up on people, especially seeing as how the title character didn't even appear on screen until the halfway mark. But when he did, it was one of my favorite Bat-Scenes. It was from the point of view of the villains as the Batman makes his first appearance in Gotham. It was brilliant, but not as brilliant as the next film.

The Dark Knight was a masterpiece. My wife is not a huge comic-book movie fan, but she loves The Dark Knight. Heath Ledger's Joker commands the screen, but everyone else delivered a stellar performance. It was so good, Nolan should have just stopped. But, of course, they made a third. Shrug.


For the past decade, Batman and I have walked parallel paths. The animated Batman: The Brave and the Bold TV show reminded everyone that a humorous Batman is still okay and can live side-by-side with his darker version, both on screen and on page. 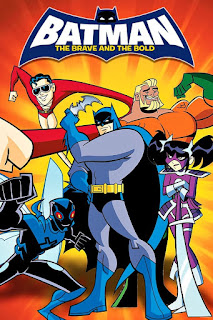 I was fine with Ben Affleck as Batman, but the movies he was in weren't great. Although that sequence of him taking out that room full of goons in Dawn of Justice was spectacular.

Comics-wise, Scott Snyder's The Court of Owls run was stellar. Completely loved it, especially considering we got something brand-new that fit in the universe in the seventh decade of the character's existence. I've enjoyed Tom King's run on the character, but I've only read here and there.

Maybe it's my age, but I'm ready for there to be another lighter Batman. He can stand next to the grim avenger we have now, but the pendulum's got to swing sometime, right?

A Batman For Everyone

If this little history does nothing else, it proves there's a type of Batman for everyone. You want the Bright Knight? Adam West is your guy. Ditto for the animated Brave and Bold. Want the dark grim avenger of the night? Lots of choices. You can pick and choose anything you want.

But for me, there is no one true Batman. The character has reflected his times for eighty years. He has evolved, but not necessarily changed. The character Bill Finger and Bob Kane created in the latter days of the Great Depression lives on. The foundations are as solid as the rocks of the Batcave. What subsequent creators do with the template is where the magic happens.

Batman has been my favorite comic book character for my entire life, and I don't suspect that's going to change. It's been a great eighty years, and I'm looking forward to eighty more.


P.S., this post is the 900th post for this blog I started twelve years ago. Hard to believe. It's been a blast, and I thank you for reading.
at March 27, 2019
Email ThisBlogThis!Share to TwitterShare to FacebookShare to Pinterest
Labels: 1970s, 1980s, Batman, Batman 1989, Bill Finger, Bob Kane, DC Comics, Michael Uslan

I guess you didn't mention Gotham because batman isn't really in it?

Didn't mention it because I no longer watch it. True, "Batman" isn't in the show, but I also lost interest, despite good performances by Ben McKenzie (Gordon), Donal Logue (Bullock), and Robin Lord Taylor (Penguin). Shrug. Part of the darker Bat-Universe I don't always embrace.