Did you get yours yet?

I headed to Houston's The Pop Culture Company yesterday with the intention of picking up not one but three copies of Detective Comics 1000. Why? Because I wanted to covers.

I had second thoughts and decided to go with the 1940s variant cover. Bruce Timm channeling Dick Sprang. Basically two for the price of one. 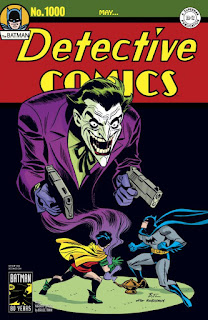 But that 1930s cover? Oh, man, does this check off basically all the pulp-era goodness I've come to enjoy. Gothic. Strange people wearing masks doing stranger things. Fire. Mystery. A damsel in distress. The hero about to save the day. 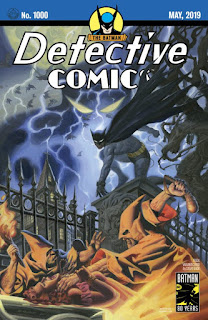 And this 1950s cover? Embraces all the goofiness of that decade. 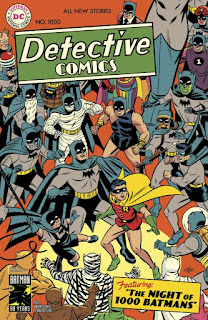 The rest of the covers are decent. While I appreciate the artists behind both the 1960s and the 1970s covers (Jim Steranko and Bernie Wrightson respectively), the images don't exactly scream the decade in question. You can check out both of them and the rest at the always excellent 13th Dimension.


Art is only one half of what goes into a comic book story and, as a writer, I'm always keen to know the authors behind the stories. Not every tale from this landmark issue listed the creators' names on the first page, so sometimes, you just started reading not knowing who penned the story. That was interesting.


Batman follows clues across the world to reveal... [no spoilers] This one is fun and benefits from the dramatic page-turn where you finally see who is behind the trail of clues. Enjoyed the deep dive in this particular comic title's history.

"Manufactured for Use" by Kevin Smith and Jim Lee


Smith's tale and Lee's art turn in a darn good story. Specifically, when you get to the end of the tale and find out what it's really about, you turn back to the opening panels and re-read it again. The clues were there all along.

"The Legend of Knute Brody" by Paul Dini and Dustin Nguyen


If the first story had some humor in it, then this one is likely the funniest of the bunch. Again, like Smith's story, this one will have you go back and scan the earlier panels to get more of the in-jokes.

"The Batman's Design" by Warren Ellis and Becky Cloonan


One of the neatest things about the modern Batman post-1990s is the Bat-God. If Bruce Wayne isn't super-powered, then his brain is. And he's usually twenty steps ahead of anyone. This story proves it.

"Return to Crime Alley" by Denny O'Neil and Steve Epting


This one is interesting and, based on interviews I've heard and read over the years by O'Neil, completely understandable. This one surprised me, and in a good, real-world way.


Of all the stories, this one was just decent. Adams' art is good as always, but I wasn't too sure about this one.

"I Know" by Brian Michael Bendis and Alex Maleev


There was more humor in this issue than I was expecting, and this one had a great ending. There's a sequence where Maleev just does a head shot of Penguin thinking. Thinking. The realization struck and he grinned. Loved it. And was that a smile on Bruce Wayne's face?

"The Last Crime in Gotham" by Geoff Johns and Kelley Jones


Kelley Jones! Great to see his art again, and Johns, as always, delivers a good, heart-felt story. And another smile.

"The Precedent" by James Tynion IV and Alvaro Martinez-Bueno


A nice story about the biggest decision Bruce Wayne ever made...after that first one. More smiles!


I've not read a lot of King's work, but darn, this one had a lot of personality. And humor. And character interactions. And yet another smile! So good to see something you don't always see.

For readers of the current Bat-titles, what's a good story arc by King?


This one appears to be the prologue to the upcoming new story arc starting in Detective 1001. I don't read comics monthly anymore, but I'm curious to see if, like Snyder and Capullo's Court of Owls masterpiece, there can be something new in the Bat-World.


All in all, it was a solid issue with only a couple of stories not landing for me, but that's likely personal preference. Loved seeing all the villains, especially the random ones, and the inclusion of Talon. The historian in me would have liked some sort of essay talking about Batman over the years, but that's likely coming in the hardback book. Still, it would have been a nice addition to the single issue more people will purchase than the bigger, more expensive book.

But what can one really say about Batman that hasn't already been said? If this single issue did one thing and one thing only, it proved that Batman isn't a single thing. The types of stories and the depictions of the characters varied with each writer and artist. Much like I commented yesterday, Batman is a canvas over which myriads of creators have painted with pictures and words.