If you think about comic book western characters, chances are good Jonah Hex will be among the first that come to mind. A former Confederate soldier, Hex now roams the west as a bounty hunter. If you know anything about him, it would be his face. Much like the Batman villain Two-Face, the right side of Hexes face is horribly scarred. I know little about the character to know how he got those scars, but it looks like fire played a part. His first appearance was in All-Star Western #10. That book soon got renamed Weird Western Tales with #12 and Hex became the star.

Issue #20 of Weird Western Tales counts as the first Hex story I’ve ever read. I’ve seen him in both the animated series Batman: Brave and the Bold and an episode of Legends of Tomorrow so I was interested in seeing him in print.

“Blood Brothers” has Hex coming into a town and taking away an AWOL cavalry soldier. That horseman turns out to be John Running Wolf, an Indian scout who was going to turn himself in anyway. “Then you don’t lose nuthin’—and I earn six months’ worth of dried beans, salt pork, and coffee,” Hex says matter-of-factly. No sooner does Hex deliver John than he’s hired to find Muriel, a “fine Boston lady who was kidnapped by Red Horse,” the very same Indian who allegedly was the one who led a raiding party against a nearby fort. Apparently never one to turn down a job, Hex accepts the job.

But things are not what they seem.

The ending shows a gunfight, fist fight, and Hex showing his true character.

Tony deZuniga does the art to an Arnold Drake story. As you could see above with the quote, Drake has Hex speak phonetically. “I” becomes “Ah,” “my” becomes “muh” and so on. A nice touch. DeZuniga’s art is really darn good. It’s still comic book art, but it’s often highly detailed, sometimes almost portrait like. 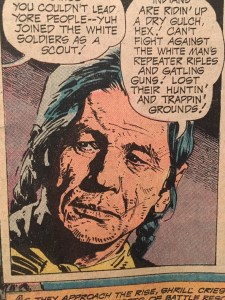 What’s always great about reading old comics are the ads. This 1973 issue pre-dates my discovering comics by a few years so I have no direct memory of some of this stuff. Kenner’s Deluxe Thrill Set of motorcycles and cars. The back cover sports Aurora’s The Imposters car which, when you look at it, morph a VW Beetle into a hot rod. Transformers? The center ad is two-fold. The cardstock ad is for jewelry (?) from Mark Jewelers, the same company from which I’d buy my high school ring. The paper ad was from the Record Club of America, what appears to be the pre-cursor to the Columbia Club that I joined in the 80s.

Neat stuff. The Jonah Hex story is pretty good. I’ll be heading to Comicpalooza on Friday,I certainly enjoyed it, and I’ll keep an eye out for more Weird Western Tales and Jonah Hex tales.

Do y'all have any particular recommendations? A Top 10 list of great Jonah Hex tales?
at March 15, 2019
Email ThisBlogThis!Share to TwitterShare to FacebookShare to Pinterest
Labels: DC Comics, Jonah Hex, Western Comics, Westerns