Forgotten Books: Top of the Heap by Erle Stanley Gardner 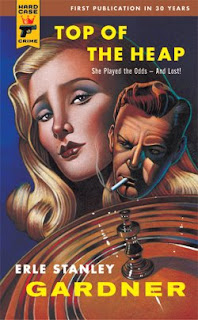 Bertha Cool and Donald Lam. If my research is any indication, they are two truly forgotten detectives created by one of the most famous writers of the twentieth century. How could that happen? Oh, right. Erle Stanley Gardner, the man who created the mismatched team of Cool and Lam happened also to create the world’s most famous defense lawyer, Perry Mason. Easy mistake to make. It’s kind of like remembering that George Lucas also wrote the movie “Willow,” except, you know, “Willow” wasn’t very good.

Not the case with Cool and Lam. I pondered starting this series with the first book, The Bigger They Come. I even asked around and folks like Bruce Grossman over at Bookgasm assured me that these books could be read in any order. Since I am still a freshman at the University of Crime Fiction, I decided to trust a couple of tenured professors, Charles Ardai and Max Phillips of Hard Case Crime. If such a university existed, the books published by Hard Case Crime would be required reading. You can tell what Ardai and company think of Cool and Lam: the third book they published was Top of the Heap, a 1952 book that was the thirteenth in a series that ran twenty-nine books. Deferring to their knowledge, I read Top of the Heap.

Boy, was this book fun! I haven’t enjoyed a book like this since The Dawn Patrol by Don Winslow. After reading The Case of the Velvet Claws, the first Perry Mason book, I thought I knew what to expect from Gardner. Not even close. I guess this is why he chose to write the first few Cool and Lam books under a pen name, A. A. Fair.

Like any good story, it’s the characters that make this story. Bertha Cool is not obese but she wears her one hundred and sixty pounds well. She’s a widow (something I picked up in research because it’s not mentioned in this novel) and her voice is imposing and you can tell from the prose that she fills a room with her mouth, if not her body. And she loves money. At least twice in the first chapter, her eyes are described as “greedy.” And she’s got a new case, one that Lam notes must be worth a lot of money because he heard the tone of voice she gave to the new client. Lam “knew from experience that it tool cold, hard cash to get Bertha to assume that ingratiating manner and that cooing, kittenish voice.”

If Bertha Cool is like Oliver Hardy, Donald Lam is Stan Laurel. He couldn’t be more opposite of Bertha if he tried. In fact, Bertha, late in the book, nicely describes her partner: “You little two-bit, skinny-necked, flat-chested, dimple-waisted, beetle-browed, double-crossing bastard.” Oops. I’m getting ahead of myself. Let’s go back and see how it all started.

John Carver Billings the Second comes into the offices of Cool and Lam looking for help. It seems that Maurine Auburn, the girlfriend of a gangster, “Gabby” Garvanza, has disappeared. Gabby is recovering in a hospital with too many bullet holes in his body. Maurine, not worrying too much about Gabby, was seen at a party with an escort a few days ago. Unfortunately, she ditched the escort and left someone else. No big deal for most people. Except for Billings. He was the ditched escort. But, not to be outdone, Billings, that same night, found two other girls with which to spend time. This new trio crashed at a motel and, by morning, the two gals had also gone. Now, Billings, thrice stood-up, needs an alibi for that night so the police don’t go suspecting him of having anything to do with Maurine’s disappearance.

Simple case for Bertha: find the girls, keep the $300 Billings already paid in cash and collect a $500 bonus. Not so simple for Lam, who immediately has reservations and questions that can’t be easily answered. Berthe, the smell of greenbacks filling her nose, sends Lam out of the office to find the girls. It’s not giving anything away to say the more Lam discovers, the more complicated the case gets. What started out as a small case with just one objective explodes up into a larger case involving murder, money, misunderstandings, and mining assets.

The entire story is told in Lam’s first person voice. And he is a smart-ass. A funny smart-ass, but a smart-ass nonetheless. The writing style is quite different than the prose Gardner uses for the one Perry Mason novel I’ve read. Granted, Top of the Heap was published nearly twenty years after The Case of the Velvet Claws so, undoubtedly, Gardner honed his writing skill.

Lam’s voice is fresh. He gets his secretary to tag along as they case the motor court where Billings passed out in the room with the two girls. You can get a taste of the relationship between Lam and Elsie Brand, his secretary, in these lines.

“How’s Bertha?” [Elsie said]
“Her same old irascible, greedy, profane self. How would you like to act the part of a falling woman?”
“A fallen woman?”
“I said a falling woman.”
“Oh, I see. Present participle. What do I do?”

Grammar jokes in a mystery novel. Couldn’t get away with it in 2008 mainly because the general public doesn’t even know what a present participle is. But in 1952, this line probably garnered a few chuckles. And I certainly wanted more from these two. Perhaps in other books.

All kidding aside, Lam is a small man who uses his brain like a chess player. If he has a hunch about something, say the actions of Person A, he goes to great lengths to get his answer. In order to verify his hunch before meeting Person A, Lam will talk with Person B. Then, he’ll go to Person A and, using information acquired from Person B, find new clues that he needs when he talks with Person C, the real focus of the investigation that you, the reader, probably didn’t even pick up on. He’s very smart but his brain gets him into trouble.

Unlike other PIs in literature, Lam can’t fight his way out of pretty much anything. And he gets scared along the way. He bends the law to meet his needs, even bending the truth at times. But his actions get him into some potentially hot water. If a hunch fails, he’s on the outs with the cops and the bad guys. This vulnerability made Lam instantly more real to me and, frankly, more relatable. He’s a bit like John Blake, the lead character in the two Richard Aleas (pen name of one Charles Ardai) books published by Hard Case Crime, Little Girl Lost and Songs of Innocence. They get by with brains, not brawn. I love my tough guy PIs but Donald Lam is a nice change of pace.

What surprised me was Bertha’s absence from this story. She was in chapter one and the last chapter. I expected more. Again, maybe she’s featured in other books. A nice note I learned about the series, which started in 1939, is that Lam goes off to fight in World War II and returns after the V-J Day. That’s very cool to me: having a fictional lead character actually leave the stage for a few books.

What I Learned As A Writer: The puzzle and the summation. Like I mentioned in my review for The Case of the Velvet Claws, Gardner is a master at creating a puzzle. It’s intricate and Gardner’s lawyerly mind really shines at the end when Lam lays out the final solution. As with the Perry Mason book, I re-read chapter one after I finished the book. It really is all there. Fantastic.

And it’s in these ‘summation’ scenes where a certain style of Gardner’s prose comes out. He lets Lam basically just stand there and talk. There were sections of sometimes half a page with Lam just talking. There were paragraph breaks but no extra prose, no “he said” or “he smoked a cigarette,” or “he walked across the room.” Nothing but dialogue. In my own writing, I’ve been so accustomed to putting in these little elements that some of the force of the dialogue is lost. Gardner’s way is much more direct. And there’s certainly some merit to it. I don’t know if that kind of prose will fly nowadays but I’ll certainly try it.

Speaking of trying things, I’ll be avidly searching for the other Cool and Lam books out there. I flat out loved this book. I’ve already started my search. It turns out I didn’t have to look far. In a big box of books—mostly westerns—I inherited from my grandfather, I found a couple of Cool and Lam books. Thanks, Grandpa. Guess he liked them, too.
at September 26, 2008
Email ThisBlogThis!Share to TwitterShare to FacebookShare to Pinterest
Labels: Friday's Forgotten Books

Interesting point on the dialogue. I was going through some old books of mine recently and found one by Iris Murdoch (A Fairly Honourable Defeat), who often has long strings of dialogue without any kind of descriptive afterthoughts. In the margins of one exchange, I had initials next to each line to keep track of who was speaking! Did you have a similar trouble with this book at all?

LOL on the Perry Mason bit.

Oh, and great observation on Lucas/Willow re: what gets remembered/forgotten. I haven't seen Willow in years, but I always remember this really corny line when Val Kilmer's character is kind of in the dumps and Willow says, "But you ARE great!" and kind of has this little trill on the "r" in "great." A friend of mine and I used to always poke fun at that line.

Most of the time, I didn't. I knew who was talking and Gardner didn't change the speaker without letting the reader know. What did throw me was Bertha speaking of herself in third person. I had to re-read those sections before I realized Bertha was doing what she was doing.

I did a Perry Mason for one of my FFB posts!! Love those books! And those written under AA Fair too! Great minds obviously think alike... ;)