Forgotten Books: Guns Along the Brazos by Day Keene 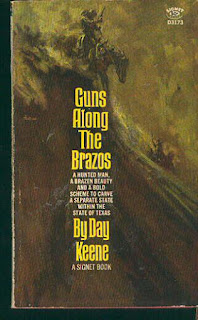 As I mentioned last week in my first Friday Forgotten Books column, I am fairly new to the crime fiction (and now western fiction) field. Thus, most of the books I’ll be reviewing are ones that I have chosen to read and report on in this blog. This approach will garner some hits and some misses. Guns Along the Brazos by Day Keene did hit the target but was no where near the bulls eye. In fact, I think it missed the target but still hit the hay bale on which the target was attached.

I treat the books and authors published by Hard Case Crime as an ongoing list of folks I need to read and know. One of my favorites so far is Day Keene’s Home is the Sailor. I noted in my review the paltry number of Keene titles available in modern editions. Imagine my great surprise and happiness when I stumbled upon a Keene book—a western no less—up in Canton, Texas at the First Monday Market.

Guns Along the Brazos, from what I can discover, is Day Keene’s only western. The native Chicagoan born Gunard Hjerstedt wrote tons of paperback originals, mostly crime stories. Here, he takes us to Texas circa 1870 by way of a Mexican prison. The night Confederate Major John Royal returned home from the war, he fled to Mexico after he saw his wife, Cora, in bed with another man. Years later, in a cantina, he kills the commandant of the local prison trying to uphold the honor of an eighteen-year-old senorita. He is sentenced to die. However, the night before he is to be executed, this same senorita, Catana, comes to his cell, tells him of a daring plan to fake his execution and help him escape. Oh, and they also have sex, natch. Things don’t go quite as planned and Catana, Royal, and two others scurry around Mexico eluding the Mexican federales, trying to make their way back to Texas.

Cora Royal, meanwhile, is scheming to carve out The State of Royal with herself as the figurehead. For all you non-Texans out there, since the Republic of Texas was annexed into the Union in 1845, there is a clause that allows Texas to divide itself into five states. It is this provision that Cora aims to use, if only she can get the citizens of Dry Prairie to vote on it. And she’ll use any means necessary to get her way.

Her husband, however, has something to say on the matter.

In the style of all good pulp stories, Keene doesn’t waste time building up character and situation. In the span of five pages of chapter one, John Royal has killed the commandant. The last two sentences are pretty fun: “He’d made a number of bad mistakes in his life. But killing a Mexican colonel in a country where the military ranked second only to God would probably be the last mistake he’d make.” Now, we’re off and running.

Keene knows his Texas history, at least the kind you’d find in an encyclopedia. He references the Black Beans of Salado incident as well as Texas geography. Guns Along the Brazos is officially the second western I’ve read and I enjoyed the Texas-specific material.

The things I questioned were some of the plot devices. Both John and Cora try to use divorce as a weapon. Cora, at one point, wants to bring in Catana and accuse John of adultery and spark a “lurid divorce” to get the tongues wagging in town. It struck me as a little too modern, this whole concept of a lurid divorce in the Victorian Era. Maybe I’m not as familiar with what was common back then but it’s my impression that divorce was a private thing, something avoided in conversation.

Keene had the action of the entire 128-page book take place over something like three years. In a book this short, you kind of expect the action to be mostly confined to a shorter time frame. At the very least, a prologue of sorts and then the main section. Not so here. Months pass between chapters 1 and 2, and more months pass as John makes his way up from Mexico to his old ranch. It jarred me in places and I had to adjust. Like my wife always tells me when she critiques my writing, if I pause, rewrite.

Keene’s prose has an economy to it that flows nicely. Not a spare word in the book. The reading does go by fast. I’m a slow-to-moderate reader and I banged out this book in just over two sittings. Like William Colt MacDonald’s book last week, Keene certainly sprinkles in more adverbs than I normally do but it wasn’t excessive.

You know how in soap operas—either day time or prime time—there are characters you just love to hate because they seem to have no other goal in life than to make everyone else’s life hell? That’s Cora Royal. She’s despicable but not always in a fun way. A humorous moment between Cora and her accomplice occurs when the analogy of Daniel and the lion’s den comes up. Cora makes the analogy and her lover replies that Daniel got out of the den unscathed. Cora’s response: “But I wasn’t one of the lions.” It’s funny and humorous but a bit trite.

The worse thing about the book is the progression toward the ending. I mean, come on, you pick up this book, read the premise, and you pretty much can script the ending. It happens that way but there was never events too dire to threaten John’s life. To be honest, I think Keene wrote internal doubt into John’s character just to give the reader some pause. It wasn’t enough.

Guns Along the Brazos (1967) was published two years before Keene’s death. By the late 1960s, the counter-culture movement was in full swing. Keene, however, was born in 1903. He was old school, traditional. That might help explain the sexist scene at the end. I was a bit shocked. And the very end? Just fill in your best western theme song as the camera pans up.

Of the two westerns I’ve read so far—Mascarada Pass and Guns Along the Brazos—I certainly enjoyed Mascarada Pass much more than Guns Along the Brazos. Keene’s book wasn’t bad. It’s just not going to stay with me for very long. Home is the Sailor is much better. I suspect Keene’s crime novels are where his reputation lies in good standing. I have found one other Keene crime novel so far—Homicidal Lady—and I’ll get to it someday. In terms of western fiction, what I’m curious to know is if Keene’s style of western is more typical—no mystery involved; two factions opposing each other; land rights; etc.—or if MacDonald’s Quist books reflect a greater trend in western fiction. I aim to find out. And I hope I hit the target more often than not.
at September 12, 2008
Email ThisBlogThis!Share to TwitterShare to FacebookShare to Pinterest
Labels: Friday's Forgotten Books

What a lot of work went into this, Scott. Thanks a lot.

I always found it interesting that Day Keene wrote a Western. I probably liked it a little better than you did Scott. Though far from his best, it definitely has a strong noir feel to it. He did seem a little "out of his element" with this book, but I'm a big Day Keene fan - and by reading it like a noir novel in a Western setting, it worked for me.

Nice review. I look forward to your posts.

Hey, I just checked out "Somebody Owes Me Money" from my local library. It was actually located in the "stacks" and had to be retrieved by a clerk! Looks like an early printing--very late 60s/early 70s. The cover (as well as the spine and back) is just a bunch of thin horizontal stripes--green, gray, and blue, I think. Anyway, really looking forward to reading this. I'll let you know what I think.