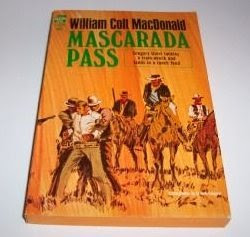 After Patti Abbott graciously invited me to submit a book for her Friday Forgotten Books collection, I was excited and worried. ’m putting myself through a self-education in crime fiction, learning its history, and determining where my fiction fits in. Thus, books are brand-new. You can peruse my reviews of other crime fiction here on my blog and get my take on what I've read so far. But today I begin with a westerna western mystery, that isby an author I never heard of until I opened a box of books my grandfather owned.

When one thinks of westerns, three names immediately come to mind: Louis L’amour, Max Brand, and . At least that’s how I see it as a lifelong SF geek looking through the barbed wire fence at the pasture that is the western genre. My dad got the box of L’amour books. I got the box of everything else. And, amid all the Luke Shorts and Giles Lutz booksand a few , Cool and , , and Mary Rogers I found about ten novels by William Colt MacDonald. Cool western writer name, to be sure. Among the MacDonald books were six books about Gregory Quist, a railroad detective for the Texas Northern & Arizona Southern Railroad Company. Shoot, I thought, how unique is that. If I read a western, might as well be one with a mystery involved.

Pass (1954) is the earliest of the novels I have so I started with it. One MacDonald uses to describe Quist’s features is his ‘aquiline nose.’ Any reader of Sherlock Holmes will know that the English detective has the same adjective used on him as the railroad detective. With a deft use of one word, MacDonald let us in on Quist’s secret weapon: his mind. But this is a western and you know Quist is handy with a six-shooter. And he has ample circumstances to his prowess.

to the town of Masquerade City once the railroad company determines that the recent freight train derailment was man-.” He arrives only to discover that one of the more respected men in town, Reed Haldane, took his own life the night of crash. Quist’s reputation precedes him and two of Haldane’s handsRamon and Chris who constantly feud with each other for Quist’s attentionenlist the detective’s help in discovering the culprit who killed Haldane. They don’t think Haldane took his own life. They believe it was murder.

Like a good pulp story, but Quist has no evidence. And it is through the method Quist gathers his evidence that the true charm of the book shines. Unlike Sherlock Holmes who rarely doubts his own abilities, Quist constantly questions himself at places throughout the book, even his own assumptions. Quist sends Chris and Ramon on various errands, gathers their results and the evidence they’ve seen, and pieces it all together. He deals with the rival family Haldane crossed twenty years before. And, as in all good pulp stories whether western, crime, or SF, he has to deal with the alluring daughter of the recently deceased.

My research into William Colt MacDonald revealed that he only wrote westerns but Pass would fit nicely into anyone’s mystery collection. He plants the clues for Quist to find and for the reader to digest. And, in good Nero Wolfe or Nick Charles fashion, Quist keeps the results to himself and gathers all concerned for the big reveal. I won’t spoil the ending here but I saw part of the ending coming. I guess that makes me as smart as Gregory Quist. But not nearly as fast with a gun as he is.

In my review of Allan Guthrie’s Kiss Her , I casual violence. that seems to erupt out of nowhere and almost as fast. That is the violence in Pass. It’s swift and brutal, but not gory. Death happens in a way. It’s a part of life in the old west.

MacDonald’s writing style is dated. The story is all third-person with only the first two chapters not featuring Quist. Once he steps on stage, MacDonald never leaves Quist’s POV. As was customary back in the 50s, MacDonald uses adverbs profusely (heh) whereas we modern writers strive for a near adverb-less style. Like a good Elmore Leonard character, Quist’s personality emerges through his dialogue, laconic and hard-edged. MacDonald also uses dialogue as shorthand for personality. Ramon Serrano, one of Quist’s helpers, is a Mexican-born character and as if it were from a 1940s western movie, dialect intact. For example: “ was my idea--” Serrano cut in indignantly. to the town drunk: “What in. hic! you care where I ?” It was annoying at first but I got used to it. Different time, different style.

The one charming aspect of the book I really enjoyed was the chapter titles. Remember those old Hardy Boys and Nancy Drew books with those fun chapter titles? Remember how, as you started a new chapter, you wondered what the cryptic chapter title really meant? That’s how it was with Mascarada Pass. I haven’t read a book like that in a long time.

Mascarada Pass was a fun book, especially as a first western for me. It checked off all the major things a western needs--gun fights, ambushes, dusty towns--and filled in the cracks with a solid mystery. Gregory Quist is a good character, complete with good brains, a little self-doubt, but fortitude enough to get the job done. It goes without saying that I’ll be reading the other Quist books in my collection. I recommend Gregory Quist as a character that needs to be remembered again. Go ahead and start with Mascarada Pass.
at September 04, 2008
Email ThisBlogThis!Share to TwitterShare to FacebookShare to Pinterest
Labels: Friday's Forgotten Books

What a lovely review. Thanks so much, Scott.

Scott: I'm a big fan of chapter titles, especially in Westerns. They give it that pulp feel. Read a few of MacDonald's westerns, to me he was a bit inconsistent. But sometimes he would strike one with a hot iron. I bet it's a great feeling to read books that your grandfather enjoyed-It keeps the connection going...

Or, click on my name above. Keep up the great work!

I agree with August that MacDonald's work is inconsistent but often good. He was also the author of the Three Mesquiteers novels, which served as the basis for a long-running series of B-Western movies in the Thirties and Forties. Many of them (novels and movies) have mystery plots.

Allen William Colt McDonald wrote 1 mystery: "The Gloved Saskia". If you read it you will understand why he stuck with mysteries.