Forgotten Books: The Man Who Invented Christmas by Les Standiford 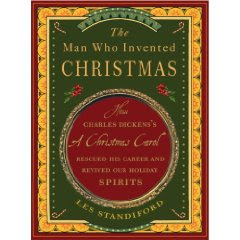 (My latest addition to the Friday Forgotten Books project shepherded by Patti Abbott.)

The Man Who Invented Christmas by Les Standiford is not a forgotten book. Of that, we must be clear. It’s new—brand new, actually—having been published in November. I’m not sure how many people know about it yet and still more ponder why I am reviewing it today when I’m supposed to be writing about something modern readers have forgotten.

One reason, nay, the very reason I am reviewing Standiford’s book today is the anniversary that is celebrated today. What anniversary? Pray, let the sub-title inform you: How Charles Dickens’s A Christmas Carol Rescued His Career and Revived Our Holiday Spirits. Need another guess? Okay, you guessed it: today is the 165th anniversary of the publication of A Christmas Carol. What better day, even if it is a Forgotten Book day, to celebrate a work devoted to one of the most beloved novels of the world.

Standiford, a novelist and popular historian, fully acknowledges that much of what he has compiled in The Man Who Invented Christmas is available in other works and biographies. The beauty of this little book is the prism with which Standiford examines Dickens. It’s only about the Carol and how Dickens came to write it, the influences, where Dickens was in his life when the inspiration for Scrooge, Marley, and Tiny Tim struck his imagination, the immediate aftermath of the book’s publication, and its influence on western culture.

The book opens on 5 October 1843. Dickens, aged thirty-one, is on a Manchester stage, part of a fundraiser for the Manchester Athenaeum. He is to speak but he is distracted. His current novel, Martin Chuzzlewit, was not finding the dazzling sales figures of earlier novels like The Pickwick Papers or The Old Curiosity Shop. Not a Dickens scholar I, this fact surprised me. I just assumed Dickens’s stardom, once attained, didn’t wane during his lifetime. It was up and down for Dickens and in October 1843, Dickens was down. With sales figures dropping, his own debt rising—including his parents’ debt which he took pains to absolve—and a new child, his fifth, due early in 1844, Dickens needed to do something extraordinary in order to get back on the financial horse.

After he gave his part of the fundraiser, Dickens walked the dark streets of Manchester and the germ of an idea planted itself in his mind. With the memories of a recent trip to a “ragged school”—a school for poor kids—fresh in his mind, Dickens did something fascinating: he examined himself, as an artist, a man, a husband, and found that he could improve his position. According to Standiford, “Perhaps he [Dickens] had let his disappointment with America in particular and with human nature in general overwhelm his powers of storytelling and characterization in his recent work—perhaps he had simply taken it for granted that an adoring public would sit still for whatever he offered it.” The Chuzzlewit sales and themes proved this to be true. He tried to beat his readers over the head with his earnestness and the readers let him know they didn’t like it. He needed a different method to convey what he wanted to convey. And he needed it to be entertaining.
A Christmas Carol was the result. We all know the story so I don’t need to retell it here. But what is utterly compelling when you stop to think about it is that Dickens went through a transformation not unlike Scrooge, just without the ghosts. At a time when he could have moved to Europe, contented himself with travel writing, and clear his debts, he chose to challenge himself. To do so, he needed to change. So he changed how he approached this book and its publication. I wonder how many of us have the courage to do that in our own lives to say nothing of something as public as a novel.

With numerous quotes from Dickens’ own writings and those of his contemporaries, Standiford shows us how excited Dickens became at his “little Carol,” how it cheered him, made his cry, and, presumably, warmed his heart as the book has done these past 165 years for the rest of us. The haggling, the negotiations, the business of writing, producing, securing the artwork, and all the other minutia needed to publish a book in 1843 is captivating. You realize that, in many ways, it’s the same then as it is now. The most paradoxical thing I learned was Dickens’ decision to publish A Christmas Carol on his own. You what that means, don’t you? A Christmas Carol was a vanity book.

As far as the claim that Dickens “invented” Christmas (Prince Albert also had a hand with his Christmas trees), Standiford goes into some good detail on how the celebration of Christmas had devolved to a holiday that was barely celebrated. He needs to do this and lay out for the reader where Christmas was in 1843 in order for the reader to understand the profound impact the Carol had on society. Christmas, for Dickens had the same enchanting power over him that his story has over us. That’s ironic considering the humiliation of his childhood—of having a father in debtors’ prison and being forced to leave school and work in a factory to help the family—made Christmas for Dickens not the overabundant thing it is today. The season of Christmas “accounts in large part for his development as an artist.” As Dickens himself wrote, “Any iron ring let into stone is the entrance to a cave which only waits for the magician, and the little fire, and the necromancy, that will make the earth shake.” There is a certain magic during this time of year and Dickens captured it between pages. It’s no wonder the story has thrived.

The Man Who Invented Christmas is a charming book, uncluttered with footnotes so it’s easy to read. (Standiford cites his sources at the back of the book.) The book contains just over 200 pages so it won’t take you many hours to read it. I recommend it for anyone with a little curiosity about how a great work of literature came about. It’ll remove the gauzy trappings that can sometimes surround a book—you know, the awe we writers and reader impose on great works of literature, how the author must’ve been touched by a literary god and the work just fell from the pen—and reveal a real man who experienced real worries but also created something special by means of his own imagination, sweat, determination, and perseverance. It’s a good lesson for all of us.

For all you writers out there, think about this. Where we you this year on 5 October? Imagine not having a word written in a new work. Imagine, now, getting that idea and you burn the midnight oil—you still have a day job, don’t forget—and finish a manuscript by the end of November and the book you just wrote is published today. Think you could do it?
at December 19, 2008
Email ThisBlogThis!Share to TwitterShare to FacebookShare to Pinterest
Labels: book review, Friday's Forgotten Books

I heard him on NPR and immediately wanted to read this.

I'm a student of history and I like Charles Dickens. This is a no brainer to buy but I may wait to next Christmas.

An excellent in depth review. There was in interesting article on Dickens and Christmas in this month's BBC history magazine. Dickens didn't exactly invent Christmas but he has a lot to do with how we celebrate things todaY. I must get this book.