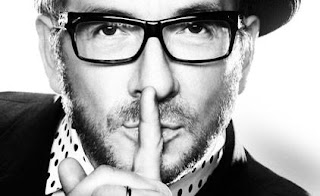 I've grown to appreciate and love Elvis Costello's music over the past 20 years. I started with a CD many Costello fans skip over: The Juliet Letters with the Brodsky String Quartet. Elvis's vast curiosity and willingness to try anything once makes him a unique host of a show that delves into the influences of musicians.

Last night on the Sundance Channel, "Spectacle: Elvis Costello with..." debuted. It's an interesting format. Elvis performed Elton John's "Border Song" with his current band, The Imposters, and none other than Allen Toussaint playing piano and singing.

Elvis then put down his guitar, picked up a microphone, and introduced Elton John as his first guest. Thehe two men talked about Elton's influences during his formative years including why each man adopted a stage name (and you get to learn how Elton chose his name). He also dropped a fact about his relatioinship with Bernie Taupin that simply floored me. I'll admit that I didn't know all the acts Elton mentioned but the level of detail, complete with clips, was extraordinary. One of the best moments was when Elton explained what he took from these people lost to history by getting behind the piano and playing one of his own songs ("Burn Down the Mission"), all the while explaining notes, chords, and lyrical style. Having only seen one show, I'm hesitant to compare the show to anything else but Elvis's show seems to be the musical version of "Inside the Actor's Studio."

The coup de grace was the closing song, "Down River," featuring the first-ever television performance by Elton and Elvis. Toussaint got behind the B3 organ and there are few better players of that quintessential southern instrument. Fantastic.

This series, so far, has thirteen episodes. And some of the upcoming guests are interesting: The Police, Bill Clinton (yeah, really), Lou Reed, and his wife, Diana Krall. The Sundance Channel's website has clips from last night and upcoming episodes (including material not aired last night). Elvis's own website has additional information.

If you love music and the craft of creating music, this is definately a show to watch. I've got my VCR already set up.
at December 04, 2008
Email ThisBlogThis!Share to TwitterShare to FacebookShare to Pinterest
Labels: Music

Sounds cool. Diana's gonna blow him away on piano, though!

I don't have any Elvis Costello cds. What's the first I should check out?

Thanks for this, Scott. I like Elvis and 'What's Her Name Today?' is one of my all time favourites.