The Killing: Seasons 1 and 2 Review

By the time the credits rolled for the second season finale of THE KILLING, my mouth open on account of the jaw-dropping revelations, I realized I had just experienced one of the best crime/mystery TV shows I've ever watched.

A couple of weeks ago, I finally relented to my wife’s urging that I watch Netflix’s (nee AMC) THE KILLING. She had watched seasons 1-3, but was willing to re-watch with me if I’d just give the show a chance. I did and wrote about Season 1, Episode 1 and how it hooked me.

Here’s a little tidbit about my wife: she rarely reads or watches things over and over. “I got it the first time,” she says. So what does it tell you that she’d be willing to re-watch a show again just so I could catch up? Let me put it to you this way: after I saw the season finale of Season 2 last night, I already want to watch both seasons again.

The first two seasons of THE KILLING, totaling 26 episodes, follow a single case. The show focuses on how the killing of a young, seventeen-year-old girl affects her family, the police detectives investigating the case, the mayoral race, and other characters in their periphery. Being based on a Danish TV show, THE KILLING is less like a typical American police procedural show than a character study, and it is in this aspect where the acting is stellar.

Mireille Enos plays Sarah Linden, detective for the Seattle Police Department. As the show starts, it’s her last day. She’s to catch a flight down to California with her thirteen-year-old son where she’ll get remarried. She is ordered to look into the new case and bring along Joel Kinnaman’s Stephen Holder, recently transferred from county, to show him how to work a case. Naturally you know how this is going to go, but Enos’s performance brings so much depth and pathos into the character that you get lost in just how good she is. Linden is a damaged person, and you get the backstory as the show moves forward. The physical way Enos plays Linden shows the damage, especially in her walk. It’s striking. So, too, her interpersonal relationships. You root for her, but it can sometimes be difficult. I can’t think of another character—especially a woman—who is quite like Detective Linden. It makes this show truly unique, and Enos was utterly compelling. 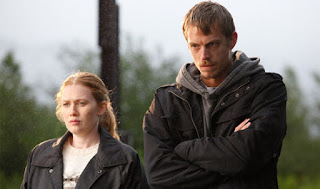 Kinnaman is an actor I only knew from House of Cards. Here, he’s the rookie homicide detective, formerly a narcotics cop who became an addict. With his street talk and attitude, he’s a bit irritating at the start, but that all changed at the end of episode 1, season 1 when Holder gets a look at the dead girl. His performance grows on you, episode by episode, as Holder grows and changes. Often I laughed out loud at some of his comments. Kinnaman owned this performance and became the character I truly enjoyed in every scene.

Other actors who also shined were Brent Sexton, as the father of the dead girl, and Billy Campbell, as Darren Richmond, the city councilman who is running against the incumbent mayor. I saw myself in Sexton’s character, his anger, his soul-crushing sorrow, his desperate attempts to hold his family together. So many times he could say so much without saying a word.

Campbell I’ve known since The Rocketeer, but haven’t seen much of his work other than sporadic episodes of Once and Again and The 4400. He was fantastic in his understated reading of Richmond. The more the show went on, the more I thoroughly enjoyed his character.

Acting is one thing. You can have great acting with a not-so-great story, but with THE KILLING, you get the marriage of all the excellent acting with a phenomenal story. With 26 episodes over two seasons focusing in the one case, the story is long, but utterly engrossing. There’s never a boring moment. As a writer who constantly throws in gun fights and chases, to see a show without much of that but with an equal amount of tension, was an eye-opening experience. I was completely consumed by the storytelling, how each new revelation plays on the various characters, and how well the nuts and bolts of the episodes were layered on each other. I’m a writer, so naturally I analyze story. True, there are moments when a character says something and you pretty much know they’re holding back, but it doesn’t detract. The complications that arise for our characters are legitimate and not some out-of-left-field shenanigans.

Then there is the mystery itself: who killed Rosie Larsen and why? Some shows you can figure out the bad guy a mile away. I developed my own theory of who and why and stuck to it until the end…when I was wrong! And then, just when you think you’ve reached the satisfactory conclusion of the show, there is a twist. And then another one! My mouth literally dropped open during the last episode. I may have even whispered an expletive.

I don’t like to binge. I’m still rooted in Appointment Television. THE KILLING is a show that you’ll want to binge, but I urge some restraint. On most nights, I watched a single episode. On weekends, maybe two. It gave me time to ponder the story, the characters, and the plot. I enjoyed that time, even laying out my theories on my wife before each new episode began. Going into this past weekend, we had eight episodes to go. We watched four on Saturday night. The pace had increased and I just wanted to get to the end.

But I’m glad I waited for the last two episodes and watched them on their own. It allowed the denouement to wash over me, complete with tears. Patty Jenkins, recently of Wonder Woman, directed the pilot and the season 2 finale. She and the writers did a thing in the finale that I can’t say has ever been done before. And it was excellent and so emotional. THE KILLING is very much like THE SIXTH SENSE: as soon as you watch it and know the ending, you really do want to re-watch.

I have seen many, many TV shows and films featuring crime, mystery, detectives, victims, and politicians. There are some truly great shows with great performances. THE KILLING, Seasons 1 and 2, is nothing less than one of my favorite crime/mystery shows I’ve ever seen.


Now, on to Season 3.
at July 24, 2017
Email ThisBlogThis!Share to TwitterShare to FacebookShare to Pinterest
Labels: Blog, The Killing, TV, TV Shows

Wow, that's a high endorsement. gotta check this out.