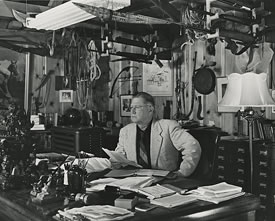 According to my Half Price Books calendar, today marks the 128th birthday of Erle Stanley Gardner. I noticed that fact yesterday while sipping coffee and thought I would commemorate the birthday with a little thought experiment.

Erle Stanley Gardner acted like an independent author even though he was traditionally published.

Let me explain, but first a bit of background.

We writers all have our list of go-to books that helped us hone our skills and learn how to be a writer. One of those books rarely shows up on when we discuss famous writing books. It’s called The Secrets of the World’s Best–Selling Writer: The Storytelling Techniques of Erle Stanley Gardner by Francis L and Roberta B Fugate. The book was published in 1980. It’s the story of how Gardner went from being merely a lawyer to, at the time of his death in 1970, the world’s best-selling writer. It is a fascinating book. When I first discovered it a few years ago, I checked it out from the Houston Public Library and read through it very quickly. I took copious notes. I mean a lot of notes. I ended up reading it a second time and then a third time. There is little about Gardner’s personal life; instead, this is a “biography” of how writer practiced, honed his skills, and ultimately, was successful.

The Erle Stanley Gardner papers are housed at the University of Texas at Austin at the Harry Ransom Center. When I attended school there, I never knew it and, let’s be honest, I had never read any of Gardner’s books. The two Fugates scoured through all of Gardner’s papers and pulled out a wonderful history — complete with many of Gardner’s own notes — of the steps he took to become the writer he became. The appendices are wonderful and there are even a few photographs of Gardner’s own handwritten notebooks complete with descriptions, timelines, and all the other things he needed to craft his mystery books. A particularly neat thing is the transcription of a lecture he gave to the writers of the Perry Mason TV show back in 1959. And when I say transcription, I’m talking about an 8 to 10 page block quote. He basically summed up everything you needed to know about how he wrote all his books in this single transcription.

So how do the writings of Gardner and independent authors collide?

As independent authors in 2017, we are urged to publish regularly and frequently. This helps us build up an audience as quick as possible and, if one can maintain a certain writing production, it will give our readers a constant flow of our work. There are many different definitions of “publish regularly and frequently.” Current thought is readers prefer 3-4 books a year. If you think about it, even a moderately paced writing schedule of 1000 words a day (30 minutes or less) can yield, more or less, four books a year that you can then publish.

The reason I bring up Erle Stanley Gardner when talking about independent publishing is his publishing schedule. Now, for the purposes of this discussion, I’m only talking about his novels. He honed his skill as a pulp writer in the 20s and early 30s, writing short stories, novelettes, and novellas. At one point in his early writing career, he set a goal of 1.2 million words a year. That comes out to a 10,000-word novelette every three days. I know some modern-day writers who can achieve this feat — James Reasoner being one of them — but the mere fact of writing a million words a year is incredibly staggering. That's 2740 words a day. But with the writing and publication of Gardner’s first Perry Mason novel, The Case of the Velvet Claws, Gardner turned toward writing more books and fewer short stories.

*The Fugates' book was published well before the discovery of the manuscript that became THE KNIFE SLIPPED, the 30th Cool and Lam novel but the second one written. It turned out that the publisher thought the content of THE KNIFE SLIPPED too much for readers in 1939. Instead of revising the novel, Gardner simply wrote another book altogether (TURN ON THE HEAT).

And he kept writing and selling stories to the pulps, although at a slower pace than before. Just for curiosity’s sake, I extracted all the material Gardner published in 1939. Here it is and I'll leave it up to you to factor in the writing time. NOTE: I left in the January 1940 publication of TURN ON THE HEAT knowing he wrote two Cool and Lam novels in 1939. The novels are in capitals.

So yeah, Erle Stanley Gardner pretty much published like an independent author. The only difference between him and what we do in 2017 is that he had a traditional publisher who, frankly, did the marketing for him. And it was the 1930s, so things were different. And he was able to devote all his time to writing. And he dictated everything. Famously, he dictated the first Perry Mason book in three days. He said it took him a half a day to come up with the plot and 2 1/2 days to dictate the entire book. Wow. I’m majorly impressed.

And if you want one more little tidbit from the mind of Erle Stanley Gardner regarding how he thought about his readers and the editors of the pulp magazines in the 1920s, there is this: “My own approach to the question is different from that of the critic. I am a writer. I serve the reading public. The reading public is my master.” And, according to the Fugates, “After that, he became an outspoken exponent of the idea the publisher of the magazine was simply acting as a middleman in purveying merchandise — story supplied by writers — to readers, the ultimate consumers.”

Erle Stanley Gardner. He acted like an independent author when such a thing rarely existed. Now it does. I wonder how many authors can replicate his success over the nearly 40 years of his novel-writing career? I have my own answer. I aim to try.
at July 17, 2017
Email ThisBlogThis!Share to TwitterShare to FacebookShare to Pinterest
Labels: Blog, Erle Stanley Gardner, Indie Authors, Productivity, Writing process, Writing Stats