One of the many blogs I have in my Feedly feed is Space 1970. The tagline says it all: Celebrating the Science Fiction Films and Television of the Polyster Decade.

With the recent passing of Martin Landau and George Romero, blogger Christopher Mills listed some other actors we have lost this year. One of them was Jared Martin. You know his face, most likely. 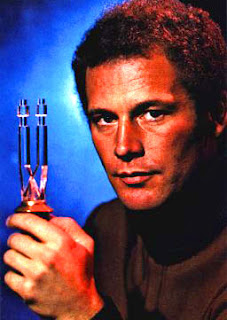 He starred in the 1977 show "The Fantastic Journey" playing Varian, a time traveler. The show centered on a group of scientist who get lost in the Bermuda Triangle. Together, they meet up with other travelers and have adventures as they try to find their way back home. Roddy McDowall was in it as was Ike Eisenmann, veteran of Disney's Witch Moutain movies. One of those adventurers was a lady from Atlantis. Bermuda Triangle and Atlantis? Perfect 70s combination.

But the character that struck me most of Martin's Varian. With no makeup, he just came across as otherworldly. Probably was the eyes. He carried some sort of weapon that resembled a tuning fork. Imagine my great delight when I discovered my mom had a tuning fork! Naturally that led me to many backyard adventures in which mom's tuning fork was Varian's weapon.

Anyway, those are just a few thoughts that entered my mind when I learn of Jared Martin's passing. He later went on to star in TV's Dallas, but it will be for The Fantastic Journey by which I'll remember him. Yet another childhood actor gone.
at July 18, 2017
Email ThisBlogThis!Share to TwitterShare to FacebookShare to Pinterest
Labels: 1970s, 70s SF, Blog, Nostalgia, TV Shows

Sorry to hear this. I certainly do recognize him.

He headlined
WAR OF THE WORLDS in 1988-89 in syndication. Awesome show for its time until the creative revamp in season 2 killed it.