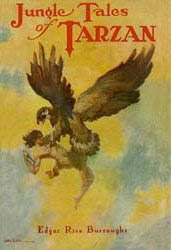 (This is my latest entry to Patti Abbott's Forgotten Book Project. Today, we're reviewing story collections. For the complete list of links, head on over to her website.)

What a difference context makes.

Back in 2008, I read my first Tarzan short story, “The Nightmare.” It’s part of “Jungle Tales of Tarzan,” a collection of twelve short stories that was published as the sixth book in the Tarzan saga. Back then, I had no ideas about the literary Tarzan. Now, having reads Tarzan of the Apes, The Return of Tarzan, and The Beasts of Tarzan, I have a better understanding of where “The Nightmare” fits into the canon.

Billed as a short story collection, Jungle Tales is all but a novel. Yes, it takes twelve snapshots of the life of the youthful ape-man but they all build on each other. The Wikipedia entry for this book lists it as a midquel, taking place between chapters 11 and 12 of the first novel. If I had to pinpoint the type of stories these are, they fill in the blanks on the growth of Tarzan from boy to man, just before he meets the Europeans.

The tales run the gamut of emotions and events in a young boy’s life. Tarzan falls in love with one of the she-apes, Teeka, a friend of his since boyhood. Gradually, through the course of the story, his “otherness” seeps into his mind (he doesn’t have hair like the other apes) and he learns to accept his status. Bukawai the witch-doctor makes a trio of appearances, as does Tantor the elephant, and Taug, the ape closest to Tarzan.

These are fun stories and show how Tarzan’s innate humanness begins to take a hold of him during adolescence. It’s fascinating to see how Tarzan works through problems and resolves issues. As a writer, creating these stories, Burroughs must have had to stop and un-think certain aspects of what it means to be a civilized human as Tarzan often does the opposite of what you or I would do. Burroughs’ cultural biases are on full display here but, as I’ve mentioned before in my other reviews, you just have to deal with them.

Jungle Tales of Tarzan isn’t really the first book to read for anyone wanting to start reading the literary adventures of Lord Greystoke. This novel is much more fulfilling if you’ve already read the first book. But I think this novel is essential for all fans of Tarzan. It’s re-whetted my appetite for his adventures. Well, here comes summer reading time...
at April 30, 2010
Email ThisBlogThis!Share to TwitterShare to FacebookShare to Pinterest
Labels: Friday's Forgotten Books, Pulp Fiction, Pulp heroes

I loved this collection when ACE published it in the Sixties. I read all the Tarzan books, but JUNGLE TALES OF TARZAN has a special magic for me.

I have 24 Tarzan books on the shelf, including this one as #6 as you say, and I have read it (and all the rest), based on the indicator next to the listing, but I recall nothing of it. Now I think I want to go back and reread it, but may have to reread the first couple to get back up to speed, since it was sometime in the 1960s that I read them. Thanks for the reminder!

Man you definitely came to Tarzan later in life eh? I do remember this book and have it on my shelves, but it's been so long I don't recall much about it other than that I enjoyed it.

I've read several Tarzan books over the years, but it's been a while. Thanks for the nudge.

I read the Tarzan's in the sixties while growing up, and still have every book i bought. I ate them up, along with everything else ERB wrote - the martian series, venus, pelucidar, earth's core, etc. I remember, amazingly, many of the story lines, as they really impressed me back then. I have not picked up one of these books since then, and i wonder how they hold up today. Perhaps I'll pull one off the shelf and find out.

Solid review. I may have to go back and check out some of the Tarzan books. It would be a nice segue from the fare I'm currently reading (desert island/deserted island type fare, with a similar "lack of civilization" vibe).

It's not "officially" part of Patti Abbot's Forgotten Book Project. But I did write a review of Christopher Moore's Island of the Sequined Love Nun which was one of his earlier novels (1999-2000ish).