Forgotten Books: The Return of Tarzan by Edgar Rice Burroughs 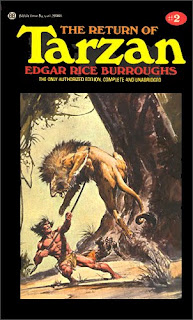 (My latest contribution to Patti Abbott's Friday Forgotten Books. See her blog for the complete list.)

I did not hate this book. I really enjoyed it and easily recommend it as part of the one-two punch that is the origin story of Tarzan. But Edgar Rice Burroughs put so many “Come On!” moments in the novel that he would be slaughtered at any modern critique group. So, don’t forget: I liked the book.

When we last saw Tarzan, Lord of the Jungle, (as recent as my forgotten book last week), he had made a decision that made the happy-ending part of me scream. And growl. And beat my chest like a gorilla. Well, not really. My family was still asleep.

Nevertheless, Tarzan leaves America and cruises across the Atlantic on an ocean liner. He injects himself in a quarrel not of his own making...and earns himself a dreaded enemy, the dastardly Nikolas Rokoff and his comrade-in-mischief, Alexis Paulvitch. Tarzan disembarks in Paris and stays with his friend, Paul d'Arnot, and, of course, Rokoff tries to off Tarzan again. And again. And again. Guess the hatred’s pretty deep.

After a time, Tarzan gets himself a job in Algeria and steams out of Paris. Lo, and behold, who should be on the ship? None other than Hazel Strong, Jane Porter’s best friend. Come on! They talk but she doesn’t know who he is. Rokoff’s there and manages to throw Tarzan overboard. And then he swims to shore. Come on! And lands right where he dad and mom were marooned early in the first book. Seriously?! Whereupon he delves back in the jungle and becomes, through various little incidences that don’t amount to much, the King of the Waziri people.

Later, Jane Porter, her dad, Tarzan’s blood cousin William Clayton, Rokoff (now in disguise as Thuran, all get shipwrecked *right where Tarzan just swam to shore*! Yeah, really. I’ll admit I was rolling my eyes at some parts of this story, not a good idea while listening to the audiobook and commuting in Houston rush hour traffic. I almost let out my own Tarzan yell when a car swerved near me.

Finally, there’s a lost city--found by Tarzan--, the great city of Opar. Tarzan himself gets captured but escapes. Yeah, really. Then--and you’re not going to believe this one--his one true love, Jane, gets herself captured, too. Yes! And Tarzan has to rescue her. Yes way! And then some other stuff happens that round out the book and make for a nice happy ending.

Lesson I take from reading The Return of Tarzan: coincidence must’ve been a lot more permissible in the 1910s as opposed to the 2000s. Some of Tarzan’s coincidences I could’ve stomached. But the landing exactly where he used to live. No way.

Taken together, however, The Return of Tarzan and Tarzan of the Apes is a great, pulp, adventure read. There are a couple of books I’ve enjoyed just a bit more this year. Other than those two, I haven’t enjoyed a book (they really are one giant adventure) as much as I enjoyed these two this year. They are great fun. Period.

You know, there’s another giant book out this week that lots of people are criticizing. I’ve started it already. I quickly realized that, yes, I have read this story before. But you know what? I don’t care. I had fun reading Tarzan and I’m going to have fun reading Dan Brown’s book, too. Fun is fun.

I’m pretty psyched about reading more Tarzan adventures. I’ve got about ten or so old paperbacks here on my shelf. I’ve mentioned before that I inherited boxes full of old westerns from my grandfather. In those boxes were the old Tarzan books. I recently asked my mom who bought those books. Without a word, she just smiled and tapped her chest with her thumb. Ah. Those are *her* books. Way to go, Mom.
at September 18, 2009
Email ThisBlogThis!Share to TwitterShare to FacebookShare to Pinterest
Labels: book review, Friday's Forgotten Books, Pulp Fiction, Reading

Oh there are plenty more "come on" moments in the books to follow. Still you have to give ERB credit he knows how to keep a reader glued to those pages.

ERB certainly used coincidence liberally as a plot device, but the action and narrative drive are so great that I can usually overlook it.

Come on moments abound, but they're so much fun to read and the biggest parts of his audience were immature, adventure seeking males who don't notice such things. Speaking for myself(actually that long ago small boy), it wouldn't have bothered me even if I'd noticed such things.

Ha, the "come on!" moment. L'Amour uses coincidence fairly often to keep things moving, but never that blatantly. I enjoyed reading your take on ERB's frequent use of, um, "serendipity." This is definitely one of my favorite reviews of yours.

I also think there's a lot of wisdom in what you write about just simply enjoying something. I myself got caught up in that whole issue with The Da Vinci Code. Then I got tired of hearing, "Well, it's corny/implausible/not-what-I'd-normally-read but what a GREAT mystery!" As I've grown a bit older, I've learned to simply OWN the fact that I like something and not apologize for it. I think it's even more important to stand behind the stuff that on the face of it doesn't appear to have "artistic merit." There's plenty of stuff out there that isn't earth-shattering but, well, could you do it?

Anyway, I digress. One of the things I appreciate about your writing, though, is how clearly your appreciation and admiration for what you write about comes across. You seem to really like just simply enjoying stuff, and that's cool! Sorry for the novel here, but you got me thinkin'... (:

Bruce - I think I'm going to read up to book 6, The Jungle Tales of Tarzan, and take a break. Or at least see how excited I still am. We'll see.

Charles - The action is quickly paced and I dug it the entire time. He even uses the trick of leaving one character in a cliffhanger and then jumps to another character. Makes you keep turning the pages.

Randy - I can proudly, at time, hold up the "immature, adventure seeking male" banner when I read. I guess my problem is now that I can't quite turn my writing brain 100% off.

Chris - No need to apologize. And thanks for your kind words. There's a lot of stuff I like simply because it's fun. Here's one: recently, I reconnected with a friend with whom I grew up thirty years ago. We both liked KISS back in the day. When I asked him if he still listened to them, he said no. Me? I still do and still love them. Cheap and easy music? Yup. Deep lyrics? Hardly. Fun as all get out? Absolutely!

Anyway, glad my joy comes through in black and white and very glad you enjoy the blog. While I may not comment every time, I read every one of your posts, too. Night Over the Solomons is still going to be my first L'amour book I read.

Sorry for the late posting. I had thought you were on an every other week schedule.

I look forward to more of these great reviews, Scott. Reading is supposed to be fun.

Patti - I forgot myself. I'll e-mail you and get on an actual schedule.

Barbara - Glad you enjoyed the review. On the not-too-distant horizon: Hardy Boys #1: The Tower Treasure.