Forgotten Books: The League of Frightened Men by Rex Stout 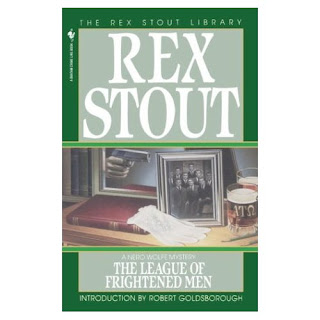 I tried. I really did. With a renewed interest in traditional mysteries, I gave Nero Wolfe another go. I re-read the Sherlock Holmes novels in December and I've been working through the short stories in January so I thought coming back to Nero Wolfe now would be a good thing. You see, when I read the first Nero Wolfe story—Fer-de-Lance—I was in the midst of reading a lot of hard-boiled stories. As such, I didn’t think much of it. Now, with an idea of what Nero Wolfe really is, I decided to read the second book in the series, The League of Frightened Men.

In short, it might be my last. I just don’t get how these books are so popular. The set-up for League is at least intriguing. Well, if you overlook how it all started. Wolfe and Archie Goodwin (his Watson) are hanging around the brownstone when Archie points out an article in the newspaper. The author, Paul Chapin, a man who walks with a cane, is on trial for obscenity. The two men argue then Wolfe sends for a copy of the book in question. He reads it overnight and then tells Archie that a man named Andrew Hibbard had contacted Wolfe recently about a case. Hibbard wants protection from a man he didn’t name. After reading Chapin’s novel, Wolfe deduces that Hibbard fears none other than Chapin. Now, Hibbard himself has gone missing.

The reason Chapin is now lame is because of a college hazing prank. Chapin got injured and the rest of the college gang feel sorry for him. They name themselves the League of Atonement and give Chapin pity and recompense these last twenty years. After Wolfe has tracked down most of the members of the League, he learns that the group thinks Chapin is not only responsible for the deaths of two of their number as well as the Hibbard disappearance, but also the poem they each received all but claiming retribution against them all was written by Chapin. Got that? Well, it’s a bit flimsy to hang a story on and it didn’t get much better the longer the story progressed.

Archie as Narrator is the absolute best thing about this book (and the one previous). His wit, world view, and doggedness could easily carry his own series of stories. And I’d devour those in a heartbeat. But he defers to his boss, Wolfe, all the time. Moreover, Wolfe can be an ass. I understand that’s part of his “charm” and Holmes, too, can be abrupt. But Wolfe seems, at least in this book, to relish his brusqueness. At one point, he commends Archie for sound logic but then chastises him for being completely wrong. It made me want to reach into the book and slap Wolfe on the face hopefully with a glass of beer in his hand.

When you read a hard-boiled story or watch an action movie, boredom is something you don’t usually experience. Even your standard hour-long television crime drama can sweep you along without the need for gun play or violence. I can get behind that kind of storytelling. However, this entry in the Nero Wolfe canon bored me. I got to where I didn’t care who the culprit was. I didn’t care what type of logic Wolfe used to expose the bad guy. With Holmes stories, the great detective knows things we don't know and then presents them in a big, and usually satisfying denouement. Not here. I listened to this one on audio (8 CDs) and I had to struggle to get through it. You know, face Houston traffic with or without the audiobook. There were afternoons where silence won.

I’ve read all about how famous Wolfe and Goodwin are in the greater corpus of mystery literature. I understand why some folks appreciate these characters. Heck, I’d love to see Wolfe go to the sanitarium and keep Archie, Fritz the Butler/Cook, and Saul Panzer, one of the PIs Wolfe hires out. Those would be books I’d read. I’m not sure I’ll get to another Wolfe book. Wait, actually, I will. David Cranmer, a fan of Nero Wolfe and his creator, Rex Stout, has asked me to read his favorite, Some Buried Caesar, before I make a final judgment on Wolfe and Goodwin. This I shall do. Just not anytime soon.
at February 12, 2010
Email ThisBlogThis!Share to TwitterShare to FacebookShare to Pinterest
Labels: Friday's Forgotten Books

Try The Doorbell Rang before you quit.

And I believe there's a Stout that is Archie Goodwin's solo vehicle, if THE DOORBELL RANG isn't that one.

I dunno, I never did feel the need for characters to be likable. Now if we're Supposed to like them, that's a somewhat different story...

I'm a huge Nero Wolfe fan, but The League of Frightened Men is definitely my least favorite in the series.
I agree with David and Bill. Try Some Buried Caeser (my favorite) and/or The Doorbell Rang before you give it up for good.
The best Archie showcase I know of is "If Death Ever Slept." He actually moves out of the brownstone, to work for someone else under an assumed name.

I like THE LEAGUE OF FRIGHTENED MEN just fine, but the pre-war books are longer and more dense, and not as user friendly as the stuff from the late '40s and '50s.
And Archie and Wolfe haven't really developed yet, as characters or as partners. Their relationship is key.

Let me make a few suggestions. These are nicely tough and much more lean: THE GOLDEN SPIDERS, PRISONER'S BASE and TOO MANY CLIENTS. If you don't like these, you don't like Stout. And you probably don't like ice cream, either.

Listening to those would work well, by the way. Also, the A & E TV series, available in two boxed DVD sets (and one massive set), is a faithful rendition, all episodes based on novels and novellas and using Stout's dialogue, so that might also be a way in, if you are really interested in giving this great writer and great series a chance. It's a little broader than the books, but not campy, and has had a lot to do with the Stout revival of recent years.

I sure do understand that sometimes a reader and an author just don't "click", but it's hard for me to understand here because you're an intelligent, experienced mystery reader and the Wolfe books are classics. Yet maybe that's the problem: classics aren't to everyone's taste.

I agree with the advise of the others in saying don't give up yet, but honestly I hold out little hope for a conversion here, Scott. We'll probably not convince you to like Rex Stout any more than you or anyone could convince me to like Cornell Woolrich.

I didn't think much of Fer-de-Lance. I liked League a little better. But it wasn't until the third book (whatever that was) that I got thoroughly hooked on the characters, and had to read the whole series (twice).

Let me echo the chorus not to give up. I haven't read all of them myself(about two thirds), but the only ones that gave me trouble were Fer-de-Lance and The League. They weren't the first Nero Wolfs I'd read and they didn't click like all the others.

It could be as the others have said, the characters hadn't been fully developed as yet.

Bill - I see that the date for The Doorbell Rang is 1966. Perhaps, as others have said here, the post-war books are better, I'll try it.

Todd - No, you don't necessarily have to like characters. However, it does make it easier to root for them. In a SF reading club I've joined, I picked a book that looked interesting and I was the only one who didn't finish it b/c I was bored.

Lt. Bullitt - I'm glad to see that League is one of the poorer ones. If Death Ever Slept sounds fun. It's 1957 and holds to the post-war theory.

Max - All these recommendations--including your three--are post war and into the 1950s and 1960s. Perhaps I am missing something since I love ice cream. My local library has some of the A&E Wolfe episodes. I'll check them out.

Richard - I love classic crime and mystery literature, everything from Doyle to Gardner to Parker (Robert) and beyond. And I've got two Woolrich novels at home I haven't cracked. Hope I like them.

Evan - Just like that old Ironsides episode where he's lost in that house and can't find his way only to discover he was just on the other side of the wall, perhaps I need to move forward. Twice! Wow. Maybe I *am* missing something.

Randy - I see, so you were hooked on NW, then read the first two, and notice their challenges. I can accept that. Re-reading A Study in Scarlet last December I had the same thoughts about Holmes (and Doyle).

Thanks everyone. I will soldier on. Feel free to say "I told you so" if I like future books.

I hope you haven't been tagged yet.

You've won the Creative Writer Award(aka Bald-Faced Liar), a meme floating around. If interested in playing, check here for the rules:

I am a huge Nero Wolfe fan, but The League of Frightened Men is truly my least favorite in the series. Because Archie and Wolfe haven't really developed yet, as characters or as partners.

Thanks for the review. I'm nearing the end of the first Nero Wolfe novel and am debating whether to search out the next one.

BTW there are some Old Time Radio episodes of Nero Wolfe that are worth hunting down. Might be worth listening to during the commute :)