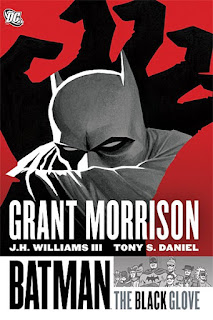 (My latest entry in Patti Abbott's Friday Forgotten Books. For the complete list, head on over to her blog.)

Most of these forgotten books are rare gems out of the public eye that bloggers want other readers to remember. I mean, really, why would a blogger spend the time to post a “Keep Away” sign for a book best left forgotten? The good folks over at DC Comics probably have some hopes that various titles throughout it’s long publishing history remain forever forgotten. You wouldn’t think Batman would be on that list and he isn’t...assuming you overlook the 1950s output. This is the era where Batman fought aliens, met various Batmen of other countries, and had a bunch of silly adventures that don’t fall in line with the darker tone most prominent in the 1940s and from the 1970s onward.

Grant Morrison didn’t overlook the 1950s. In fact, he took a most novel approach: reincorporate some of the more outlandish elements of the 1950s Batman stories and put them back in the larger canon. Batman: The Black Glove is one of the story arcs that does precisely that.

In Part I of The Black Glove, Batman and Robin (Tim Drake) travel to an isolated Caribbean island to meet up with other crime fighters from across the world. These guys (and one gal) are The International Club of Heroes, AKA “The Batmen of Other Nations” story from the 1950s. You have the Indian Batman, a dude called Wingman, a swashbuckling swordsman, a guy from England. (Hey! This was the 1950s, remember?) Once the Dynamic Duo arrive on the island, a sort of “Ten Little Indians” scenario starts where certain characters start being killed and it’s up to Bats, Robin, and the other Club members (who don’t necessarily trust Batman) to solve the problem before they all perish.

Part II of the story arc involves a Gotham City Police Department initiative to train certain policemen to be Batman in case the real hero dies. Bat-mite shows up in this one as Bruce/Batman has a heart attack and is captured. Here, Bruce remembers forgotten events (i.e., the original 1950s Batman stories) as he attempts to defeat his kidnapper. The end result sets up a couple of things. One, the giant “R.I.P.” story line, and two, the presence of a dark, criminal group known as The Black Glove whose sole purpose is a years-long undermining and destruction of Batman himself.

It’s a good story, although I think the first part is more fun. The second is deeper with a decided psychological bent to it. Morrison delves into the elephant in the room when it comes to the Dark Knight: that, technically, Bruce Wayne is mentally disturbed to do what he does. A new lady friend of Bruce, Jezebel Jet, calls him on it and puts a name to it. And, just like any good monthly comic, the last panel is one of the biggest cliffhangers I’ve seen in a long time.

As I catch up on the Bat-stories I’ve missed these past few years, I started here. It leads into the “R.I.P.” story arc, followed by “What Ever Happened to the Caped Crusader” and “Final Crisis.” I enjoyed the books and the fresh take on an era most people dismiss out of hand. The artwork by Tony S. Daniel is vivid, colorful, evocative, and fluid. There’s a great number of visual homages to earlier stories that I enjoyed discovering and his use of various shapes and panels to tell the story was terrific.

DC Comics may have forgotten the stories from the 1950s but Grant Morrison didn’t. Now you can revisit a forgotten time in Batman’s history and see where it leads him. My review of Batman: R.I.P. will be next in this series.
at January 15, 2010
Email ThisBlogThis!Share to TwitterShare to FacebookShare to Pinterest
Labels: Batman, Comic books, Friday's Forgotten Books

Wow, what an interesting choice for this entry's "forgotten book" -- and even more interesting to find Morrison is reclaiming some of the Batman lore most fans would hope to forget. I haven't been reading any mainstream or superhero comics for a while, but it sounds like I need to catch up.

Geoff Johns has a tendency to find trivial minutae from the silver age and slip it back into continuity. For example I've heard that "the tailor", Paul Giambi, will be appearing in the new Flash ongoing that's going to launch in April following Flash:ReBirth. Giambi was introduced in the 60s as the tailor who designed all the costumes of the Flash's rogues.

Speaking of Geoff Johns, DC is going to be launching some "World's Finest" titles that will be outside regular DC continuity and allow writers to basically start over from scratch on some classic DC characters. Johns has been offered and accepted the Batman World's Finest. So that's something to look forward to as well.

never heard of it so cheers. grant morrison is someone i have mish mash of knowledge about but i think he's the bloke who dod the hitler comic with Morrissey as the geek chorus?

Do you know I once had a copy of the third Batman comic book and traded it for an Archie.

Chris - If you can get it, The Black Casebook is the collection of 1950s stories from which Morrison pulled elements for his R.I.P., and this, story. Neat to see certain frames lifted almost exactly, but with modern touches.

Perplexio - I've not read a lot of Johns work. Need to. Saw the WF titles yesterday at the comic. Now I know what they're all about. Also saw a Weird Western Tales issue tied-in with Blackest Night. I'm a'gettin' that'un.

Paul - Don't know much about Morrison other than his Batman work so I can't say.

Patti - You did WHAT?! My dad did similar things with his books, too. People just didn't think about collecting comics back then.

I sold my entire comic collection- including Avengers 4- for 5 pounds when I was 15 and bought the first Talking heads LP and Jocko Homo by devo. however... Patti!

If you want a good introduction to Geoff Johns writing check out The Flash: Rogue War or Green Lantern:ReBirth