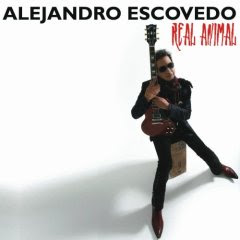 (This is a repost during my vacation week. I'm selecting some content from 2008 that had no comments.)

Back in April 2008, I enjoyed my fourth Bruce Springsteen concert. It was the Magic tour and it was magnificent. During the encore, Bruce introduced a guy I had never heard of: Alejandro Escovedo. Yeah, I'm a Texan but somehow, Escovedo's name had escaped me. They played "Always a Friend" from Escovedo's forthcoming CD, Real Animal. The song was good and, hey, if Bruce likes it, I'll at least give it a listen.

Come June 2008, the CD was released and, via, iTunes, I gave it a listen. Let me put it this way: I listened to the 30-second previews of all these songs...and bought the album. This CD was my first introduction to Escovedo's work and I don't think it'll be the last. Tony Visconti, producer of some of David Bowie's best material as well as T.Rex, produced Escovedo's CD and many of Visconti's influences show up.

Sonically "Golden Bear" seems like an outtake from Bowie's "Ashes to Ashes" complete with drip-drop sound effects. Being unused to Escovedo's vocal stylings, "Chelsea Hotel '78" evokes early Elvis Costello who sang that he didn't want to go to Chelsea. The very next track, ""Sister Lost Soul," suddenly hearkens back to 1960s guitar-driven balladry. No sooner did we imagine dancing with a girl to "Sister Lost Soul" than Escovedo fast-forwards to the late 70s punk movement with "Smoke," whose guitar frenzy drives the song.

I did some research about Escovedo after I purchased the CD. One of his favorite musical accompaniments is a string quartet. Ironically, the first Elvis Costello CD I ever purchases was his foray into classical music, The Juliet Letters, with the Brodsky Quartet. That interest, in turn, spurned my interest in string quartets of which The Turtle Island Quartet's tribute to John Coltrane, A Love Supreme, is but my latest love. All this is to say that Escovedo's "Hollywood Hills," a song with his string quartet, is one of the best tracks on Real Animal. For someone like me, who cherishes the eclectic in music, this CD is wonderful.

But the music is only half the story. Escovedo's lyrics provide this CD with its emotional foundation. Even knowing nothing about the man, I can listen to this CD and learn a lot about the graying rocker who joined Springsteen on stage in Houston. This is a work of autobiography via the music of America. It is a history of America for the past 30+ years as seen by a troubadour who constantly tours and has a unique vision to what this nation has become. At times mournful, at times jubilant, at times angry, this collection of songs is one of the best I've heard in a long time.

I think for long-time fans of Escovedo, this CD is a love letter to the times, events, concerts--the promise of youth crashing headlong with the broken reality of adulthood--of the past 30 years. You might even make the case that it's a thank-you letter as well.

But for folks like me, being introduced to Escovedo in 2008, this acts as an introduction. It is Escovedo saying to newcomers: "This is who I am. This is where I've been. This is my sound. I hope you like what you hear. If you do, join me. I've still got more roads to travel."

Count me in. Just give me a map.

Dave Marsh, a longtime Springsteen fan and journalist, has an excellent article via the Alejandrdo Escovedo website.

2009 Update:
I've lived with this CD for over a year now. It's my favorite "surprise" CD of 2008. It's still excellent, maturing and mellowing with age. I've had my 8-GB iPod since January 2008 and this CD has never left it since I bought it. I return to it again and again.
at July 13, 2009
Email ThisBlogThis!Share to TwitterShare to FacebookShare to Pinterest
Labels: Music

Thanks for the tip. Will pick one up at my library and try it.

If Bruce Springstein likes this artist, I, too, will give it a listen. Thanks, Scott.

Thanks for the great review. I have been a fan of Alejandro's since the early 90's, and it gave me a little different perspective of his music. the only other thing I can say is see him live particularly if he is with his orchestra the violin and cello kick butt. They are not there for texture, they are as important to his arrangement as any of the guitars/. I saw them live in an accoustic setting a couple of years ago, and one of the cello players bow actually disintegrated he was playing so hard.
Check out the Austin City limits website or Youtube you may be able to fine some live video.

My favorite album of his is Burbonitis Blues. It's an awesome mix of country and rock!!

Patti - Tell me what you think about the album.

Barbara - That's pretty much why I gave AE a listen...and was not disappointed.

Ah-Clem - You're welcome. I thoroughly enjoying discovering 'new' music, even if it's only new to me. Now, I just need to branch out and listen to some of his other albums. About the strings: I love string quartets. Have you ever heard Elvis Costello and the Brodsky Quartet's Juliet Letters?

atx - Perhaps Burbonitis Blues can be my next album by AE...?

Generic Viagra (sildenafil citrate; brand names include: Aphrodil / Edegra / Erasmo / Penegra / Revatio / Supra / Zwagra) is an effective treatment for erectile dysfunction regardless of the cause or duration of the problem or the age of the patient.
Sildenafil Citrate is the active ingredient used to treat erectile dysfunction (impotence) in men. It can help men who have erectile dysfunction get and sustain an erection when they are sexually excited.
Generic Viagra is manufactured in accordance with World Health Organization standards and guidelines (WHO-GMP). Also you can find on our sites.
Generic [url=http://gsmmind.ru/english]free porn movies online[/url] is made with thorough reverse engineering for the sildenafil citrate molecule - a totally different process of making sildenafil and its reaction. That is why it takes effect in 15 minutes compared to other drugs which take 30-40 minutes to take effect.
[b]Viagra Voor Vrouw
indian viagra
buy generic viagra online
womens response to viagra
Viagra And Diuretics
viagra a 30 euros
Lyrics Viagra Stop Stop
[/b]
Even in the most sexually liberated and self-satisfied of nations, many people still yearn to burn more, to feel ready for bedding no matter what the clock says and to desire their partner of 23 years as much as they did when their love was brand new.
The market is saturated with books on how to revive a flagging libido or spice up monotonous sex, and sex therapists say “lack of desire” is one of the most common complaints they hear from patients, particularly women.