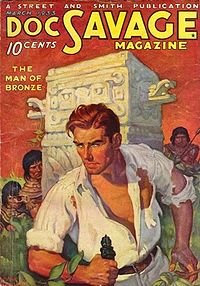 They got nothing on Doc Savage. In this Year of More Pulp I’ve started, I decided to start with the man tagged as the first superhero. I’ve known about Savage pretty much my whole life and I’ll admit to a misconception: I always thought his sobriquet (“The Man of Bronze”) really meant the man was made of metal, like Colossus from The X-Men. Nope. But I don’t think Colossus could have done half the things Doc did in his first adventure.

Clark Savage, Jr., AKA “Doc” Savage, stepped onto the pulp fiction stage in March 1933. Street and Smith Publications wanted another pulp hero to go along with The Shadow and they wanted a superman (notice the lack of capitalization). As Lester Dent, the writer of many of Doc’s 181 tales, reminisced years later, Doc “had the clue-following ability of Sherlock Holmes, the muscular tree-swinging ability of Tarzan, the scientific sleuthing of Craig Kennedy, and the morals of Jesus Christ.” Whew! When they wanted a superhero, they really did want a super man.

“The Man of Bronze” is Doc’s first story. I picked up the reprinted version from Nostalgia Ventures, a line of books you can find in many comic stores. The book is nicely presented in two-column format, complete with the sketches that accompanied the pulp magazine back in 1933. The story, as it should, starts off with a lapel-grabber: “There was death afoot in the darkness.” What’s great about his opening is the killer and the reader both get introduced to Doc Savage from a distance. Indeed, when the killer looks through his binoculars, he mistakes Doc’s body for a statue. There is quite a lot of authorial intrusion in this first chapter as Doc and his five companions are introduced. For those of y’all who don’t know, Doc’s friends are:

All these men excel in their chosen field of expertise and all their skills are put to the test in this first adventure. The problem is this: someone killed Clark Savage, Sr., Doc’s father.

No sooner than all six men were ensconced in Doc’s 86th floor headquarters than the assassin fires his rifle, aiming for Doc. What follows is a six chapter action sequence that gives you merely a taste for what lies ahead. I’m used to action scenes lasting paragraphs or pages, not chapters. And one thing immediately stands out: as good as Doc’s Five are, Savage himself is flat-out superior. He does everything right and far better than mere mortals. Doc hangs on a rope about to be cut by the assassin. What does he do? Lets go, plummets, allows the assassin to lose his balance, and then grabs the rope again, swinging effortlessly onto a ledge. It goes like that.

The bulk of the story finds the Super Six winging it down to the fictional Central American country of Hidalgo. Doc’s father left him an inheritance, a portion of Hidalgo for his very own. Now, he just has to go claim it. After getting shot at again and again, Doc and the Five discover a Mayan pyramid of pure gold ore. These Mayans welcome Doc and his friends but the red-fingered warriors are in the sway of an evil man, the very fiend who killed Doc’s father.

I give nothing away when I say that Doc lives (for 180 more books even). The action plays in the best tradition of Saturday morning serials at the movies. At the end of one chapter, one of Doc’s friend is trussed up and thrown into a pit of writhing snakes. Heavens! Cut to the next chapter and you realize the truth: Doc *already* figured that the bad guys would throw his friends into the pit so he, Doc, climbed into the pit, caught his tied-up friend, and let a rock fall to the bottom of the pit, the better to give the bad guys the illusion of victory. There is nothing wrong with this kind of action. I found it pretty darn fun, really. But, I’ll admit, it might get a bit long in the tooth by about book #45, to say nothing of 181.

Lester Dent, writing under the house name of Kenneth Robeson, writes fast, quick prose with lots and lots of good Pulp Words. The tale is never boring. There’s no time to be boring. He brings in some good humor among the men and not a little 1930s-era stereotypes and life outlooks. The funniest aspect of Doc Savage the Hero is how he deals with the one female in the book, the Mayan king’s daughter. Savage is powerful, masculine, without reproach, but utterly flummoxed when it comes to seeing that the daughter likes him.

Dent’s style is definitely an omniscient author. He tells you just about everything and shows only rarely. Don’t know if he changed later on or not but it did take some getting used to. For example, Doc leaves the scene a time or two to hunt for some clue. Dent doesn’t have Doc explain to his friends where he went. In prose, Dent just tells you. Not bad for a “novel-length” story in a pulp magazine but certainly not the way we do it nowadays.

I can’t say Doc Savage is really forgotten but he’s new to me. Plus, I don’t see his books in print. In the volume I have, Nostalgia Ventures grouped the first two Doc adventures together with a nice introduction and a historical essay. They do The Shadow as well. Expect a review on him in the coming weeks.

I don’t think I’ll be able to read all of Doc Savage’s adventures. They’d probably get a bit monotonous. But I’ll certainly plow through a good chunk. I hadn’t had this much reading a book in a long time.

Note on an audio version: I found a podcast of The Man of Bronze by Uvula Audio. It was a good recording and they even included sounds effects.
at January 16, 2009
Email ThisBlogThis!Share to TwitterShare to FacebookShare to Pinterest
Labels: Friday's Forgotten Books

For me, Savage is pulp but maybe best enjoyed when your a teenager like I was when I read them. 181! I had no idea. I've probably read about fifteen adventures and doubt I will finish the series myself.

The style and tone of the first book are a little different than the others, because, while Dent wrote it, there was heavy input as well from Henry Ralston, an executive with Street & Smith, and John Nanovic, the editor of the magazine. In fact, Ralston wrote what amounts to a short story called "Doc Savage, Supreme Adventurer", which Dent used as the basis of the first novel. From then on, though, what you get is pretty much pure Dent (except for the books that were ghosted).

I love the Doc Savage books. I bought the Bantam paperback of METEOR MENACE brand-new off the spinner rack in Tompkins' Drugstore in 1964 and followed it in short order with THE MAN OF BRONZE and THE THOUSAND-HEADED MAN. Those three books were the initial paperback releases. I still recall sitting down to read a few chapters of THE THOUSAND-HEADED MAN one Sunday afternoon and not getting up until I'd read the whole book. After that I picked up every one of the Bantams as soon as it came out. The style and the types of plots change drastically over the years, with the stories from the mid-to-late Forties losing almost all of the larger-than-life feel and becoming hardboiled detective adventures instead. They're not bad, but I prefer the earlier supersagas, as Doc fans call them. I highly recommend any of the novels from the Thirties, but the first two years or so of the series are really something special, at least in my opinion. Which has gotten rather long-winded, for which I humbly beg forgiveness.

I've been trying to decide if it's time I dip my toe into the pulp Adventure genre ever since the Gabriel Hunt series was announced. I'll probably start with the first Hunt by Mr. Reasoner and see how I like it. It would be a nice change of pace to read between the dark stuff.

Were you already reading this when HCC announced the new Lester Dent in October? I had never heard of either until then.

David - There were a lot of things I should have read when I was a teenager. I was too busy with Star Wars and Star Trek (Logs by Alan Dean Foster).

James - The book I have couples "The Man of Bronze" with the second book, "The Land of Terror" (?). The essay in that book mentions that Book #2 is almost nothing like #1. I shall now forge ahead and read #2. Shouldn't be too hard to find these books. I've found them online as ebooks.

Jacob - I was reading Doc when all the blogs started touting Dent's HCC entry. In the months leading up to Gabriel Hunt, I've decided to read at least one book by all the authors Ardai and others name drop: Robeson, Rohmer, Haggard, etc. Now, based on James' recommendation, I plan on reading more Doc Savage books as well. First up, likely, will be The Shadow or Tarzan or John Carter.

I know this is one series I would never get through. Even if I had started at a younger age.

I just read this particular Doc Savage not long ago. I think some of the later ones in the series are better, with less of that "tell you everything" mentality. I'm generally not a huge fan of Savage, probably because I didn't read him at all when I was young and got used to Barsoom and Conan instead.

I read them and loved them in the 70's when I first saw them at a book stall England.And I even enjoyed the camp fim with Ron Ely too. And there were comics, of course, which I remember being pretty good. the Shadow suited my adolescent bent better, though. Nice piece.

Quite right! It is good idea. I support you.

Has casually found today this forum and it was specially registered to participate in discussion.

I picked up my first Doc novel in my Jr. High School library. It was "The Monsters". It was a fast read. I was addicted to Doc Savage.

There was a Doc Savage movie staring Ron Ely. It pretty much ended the carrer of Ron Ely as well as wrecked the image and sales of Doc Savage. Why Bantam Books and Con de Nast did not step up and call foul is beyond me!

http://www.paper-dragon.com/1939/dent.html
Lester dent on his process