Book Review Club: Skating Around the Law by Joelle Charbonneau 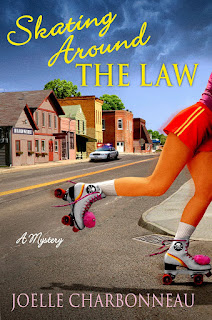 (This is the February 2011 Edition of Barrie Summy's Book Review Club. For the complete list of today's reviewers, click the icon at the end of this post.)

Have you ever had a situation where you weren’t looking for something, and yet you stumble over it and discover something brand new? A song on the radio catches your fancy and you seek out the artist and buy the CD. The trailer of a movie of a type you don’t normally watch finds you in the seats on opening day. Well, that happened to me with Skating Around the Law, the debut novel by Joelle Charbonneau.

Let’s go ahead and get the disclaimer out of the way: Joelle and I are among the group of eight writers who blog under the Do Some Damage banner. I met her when she had a signing at Houston’s Murder by the Book last October. I bought her book and read it. As a reader, I don’t normally choose the lighter, fun, effervescent type books. When it comes to written mystery fiction, I trend towards hard-boiled, gritty material. Not so with television, where “Castle,” “CSI: Miami,” and whatever’s on Masterpiece Mystery rule the day. Having said all of this, I intended to read Joelle’s book, like it enough to compliment her, and then think nothing more of it.

Skating Around the Law did nothing less than shake the foundations of my reading life. Suddenly, it was as if an entire section of the bookstore was opened to me, the section I so assiduously avoided. While the book doesn’t precisely fit within the strict definition of the cozy, it is a close relative. Thus, this book is the first of that type of book. And it won’t be the last.

The novel features Rebecca Robbins, a young professional in Chicago who returns to her small hometown with one goal in mind: sell the roller rink her deceased mother bequeathed to her and get back to the Windy City. There’s only one thing that’s bringing down the value of the rink: the dead body in the bathroom. When the police don’t really seem that interested in solving the death of Mack the handyman, Rebecca takes matters into her own hands. With a colorful cast of characters and the able assistance of her randy grandfather, Rebecca starts to poke her nose where most of the town thinks it doesn’t belong.

Perhaps the most charming subplot of the novel is that involving local veterinarian Lionel Franklin. That would be the the six-foot tall, ruggedly handsome Dr. Franklin, the very man who also happens to own Elwood the camel. Playful tête-à-têtes are alway good and Charbonneau gives Rebecca and Lionel plenty of time for spars, longing looks, and come-backs. To be honest, the romantic in me wanted a tad bit more, something she assures me is in the next book of the series.

Charbonneau’s prose is sharp, pointed, and quick. The heroine’s first person narration is natural sounding, full of observations with which any modern woman (or man) will be able to identify. I found myself chuckling aloud at certain passages that charmed me, even reading a few aloud to my wife. One of my favorites is this one: “I blinked as Lionel set me back down on my own two feet. What happened? Did I have eclair breath?” The grandfather, Pop, is hilarious, dating just about every single senior citizen in town. The structure of the mystery should satisfy even the most ardent of readers, and even I didn’t see the culprit until the very end.

One of the things that makes a book or television series work is the answer to a simple question: would you, the reader, want to return to the setting and the characters. For me, it is an unqualified and resounding yes. I have not had this much fun reading a book in a long time.

Great job. Another book for my 'To Read' list! Chee

I was surprised to see your selection this month but really enjoyed your review. I do enjoy the occasional cozy or traditional mystery, and I especially love stories set in Chicago. Win!

That's not my typical genre either, but your description is intriguing.

Wow - thanks for such a fantastic review, Scott. I am so glad you liked the book. You have made my day and I will now cheerfully finish my editorial notes for SKATING OVER THE LINE.

What a marvelous review! Sounds right up my alley! Thank you.

A great review, Scott! I am definitely a fan of mysteries with female protagonists, so this sounds like a perfect addition to my reading list.

Jenn - I know you won't be disappointed. The only "downside" is having to wait until September when the second book comes out.

Saralynn - Funny how certain things surprise you, huh? No, I haven't read Morgan but know his work.

Joelle - Thanks for stopping by and for the fun, fun book.

Barrie - I think you'll enjoy it. And, even though I can't remember how old your oldest is, she might like it, too.

Rose - Rebecca as a hero is a joy to follow, mostly, I think, because I can relate to her type of humor and worldly observations.

Lovely review, Scott and I am sure we will all want to read this book it's sequel and Joelle's new series about a choir master.

Righteous. What an alluring review.

I needed to draft you that very small remark to say thanks a lot yet again over the superb advice you have discussed on this site. This has been really tremendously generous of people like you to provide extensively what exactly some people would have marketed as an e book to get some cash for their own end, most importantly considering that you might have done it in the event you wanted. The tricks as well worked to be a great way to be sure that some people have similar passion just like my personal own to know a great deal more concerning this issue. I am sure there are thousands of more enjoyable sessions up front for people who scan through your forum.

The MacMillan romance blog's gone live - how about y'all's side?

Patti - The choir master one looks to be just what the Glee-loving public will gobble up. Also, if you find your way to St. Louis in September, you'll get to meet Joelle, too.

Kinsey (or is it Holley as that's how the folks at the Super Bowl party called you) - Thanks for stopping by. I'm heading on over to check out the MacMillan blog now. I'm not sure when the mystery blog goes live. I'm still on the hook for the first of four posts. My wife laughed at me when I came home from the party talking about the small world we writers live in. She said it was like I had only met you that day. Funny. Hey. When writers meet and talk shop, it's always a great time.