Music Review: Two Men and the Blues by Willie Nelson and Wynton Marsalis 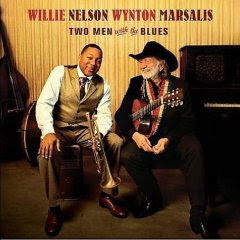 I know what you’re thinking? Willie Nelson and Wynton Marsalis? Together? I thought the same thing, too, when I saw them on The Tonight Show earlier this year. I mean, we are talking about Willie Nelson, the Texas troubadour who will duet with, well, just about anyone who asks. And then there’s Wynton Marsalis, the jazz purist—puritan?—who disdained even his brother, Branford, for touring with Sting back in the 1980s. How in the world did these two get together?

That’s something I haven’t discovered yet, even in the nice little behind-the-scenes video up on YouTube. Upon closer inspection, the pairing is not as far from left field as you might think. Nelson has covered everything including reggae (yeah, really) but one of his biggest albums was Stardust (1978), an album of standards from the Great American Songbook, that helped to define what Nelson does best: blend many varied genres and elements to create something different, if not original. Marsalis, in the meantime, has spent the bulk of his twenty-five year career bringing back the prominence of acoustic jazz, the jazz before Miles Davis “corrupted” the genre by plugging in and going electric. And Marsalis succeeded, reminding folks (and record executives) that traditional jazz can be good and make money at the same time. The songs Marsalis used to usher in the Young Lions movement in jazz were those from The Great American Songbook.

Beyond the two men drinking from the same well of music, look at their backgrounds. They are both southerners, Nelson from Texas and Marsalis from New Orleans. Southern music is a smorgasbord of sounds and influences. Gospel, blues, jazz, bluegrass, folk, country, Texas swing, and more all can be found in almost any song by a southerner. So it was, two southerners and their band members went up to New York and recorded a concert at Jazz at Lincoln Center.

"Two Men and the Blues" is a live recording. It serves the music well because, I think, the perfection of a studio would have lessened the impact and spontaneity of the performance. You get the sense that these seven men are not on a stage at a prestigious concert hall but in the drummer’s garage. It’s a Saturday night, it’s hot, the door’s open, the beer getting warm in the ice chest full of melting ice, and these guys are just jammin’ for no other reason that they love music.

“Bright Lights Big City” kicks off the set. Wynton’s band—he brought himself on trumpet, Walter Blanding (sax), Carlos Henriquez (bass), Dan Nimmer (piano), and Ali Jackson (drums)—sets up the nice lilting shuffle feel. Mickey Raphael’s harmonica is also there, adding that certain flourish that only a harmonica can. All the instrumentalists take a turn at soloing, even Nelson on guitar. You know going into this recording that Wynton’s band is top notch. If there was going to be a weak link, it was going to be Nelson’s guitar playing. I was interested in hearing if Nelson took a turn on soloing. He did, and, while it’s not superb, this is the type of song where fancy pyrotechnics are out of place. So Nelson did just fine.

The longer you listen to this recording, you realize how close the phrasing of Nelson’s vocals and his guitar really are. His Martin nylon string guitar does not hold the sustain like a steel-string guitar. Nelson usually compensates by repeatedly striking whichever string he’s playing. But on this recording, he doesn’t do that a lot. He lets the struck string fade when it wants to, much like his voice. Nelson is not a singer who can hold a note for a long period of time. Where a singer like, say, Sinatra, would carry his phrasing past the four-measure break, Nelson breaks his vocal phrasing short. As a result, there are usually more silences in a Nelson tune. That’s his style and it really works in this set.

“Night Life” is one of those tracks where you imagine it being played in a late-night jazz club, after midnight but before closing time, the smoke hanging low from the ceiling, all but the die-hard have gone home. It’s the time of night for the faithful, the friends, and for the girls in the audience who want to date a jazz performer. Wynton’s trumpet shines here, opening the track with a long solo that sets the down tempo mood. But it’s his flutter sound during the chorus that really takes the roof off. Out of nowhere, it blasts above Nelson’s vocals. And Willie brings out a better solo on guitar, a nice, soft theme that put my worries about his abilities to rest. He also played a good melody on “Basin Street Blues.”

Since Stardust is still one of Nelson’s most famous records, you knew the band was going to cover some of those songs. They do the title track and, of course, “Georgia, On My Mind.” "Stardust" has a beautiful, lush tenor sax solo, the kind where you can hear the air passing over the reed in the lower register, a nuance that, for me, a sax player, I love. “Georgia” starts off showcasing Nelson’s vocals as the centerpiece but the soloist shine just as brightly. Marsalis’s wah-wah trumpet wails, Raphael’s harmonica sings, and Nimmer’s piano playing bring a new, but slower, energy to this song. If I had to pick a definitive version of this song as sung by Nelson, it would be this one.

When you listen to the record, it’s at this point where the audience and the band start to let loose. From the band side, this is the first tune where you can hear Nelson compliment his fellow players during the song. From the audience, they knew the song as it began and they cheered audibly at its conclusion. I could say the audience was polite but tepid in their applause at the beginning of the set. Perhaps they, like new listeners, don’t know what to make of this seemingly strange pairing. By the end of “Georgia,” they knew they were a part of something special. And they let the band know it. For the rest of the set, you can hear cat calls from the audience as they get into the spirit of the night.

An old Hank Williams tune, “My Bucket’s Got a Hole In It,” has the vibe of the New Orleans Preservation Jazz Band, complete with a squeaky clarinet and a drum solo, greeted with whistles and cheers of the audience. They cheer Nelson’s best guitar solo in Cole Porter’s “Ain’t Nobody’s Business. ” They laugh as Wynton brings his only vocal performance on this song, telling Nelson and the audience all the things he might do that are, you guessed it, nobody’s business. The set closes with “That’s All,” a fast blues shuffle where everybody has their last chance to shine. Amid the audience clapping along (wonder if they were standing?), you get a taste of the power of Wynton’s trumpet as he let’s loose with one of his famous long notes, high and a little dirty.

By the end, the band and the audience have relaxed and just let the night sweep them away. And we as listeners can get a taste of what it was like those two nights at Lincoln Center. When performances like this crop up, my immediate impulse is to want more of it. Sometimes, the sequel does not live up to the promise of the original. In this case, however, another CD would be more than welcome. And I’d love to see the band perform down in Austin at the South by Southwest or Austin City Limits festival.

I love it when two musicians realize that there are more things that unite them than differences in their approaches to music. It reminds you that music is universal and can bring just about anyone together. And, if the results of unique pairings are like that of this CD—where you can’t help but smile and tap your foot—it really is lightening in a bottle.
at October 06, 2008
Email ThisBlogThis!Share to TwitterShare to FacebookShare to Pinterest
Labels: Movie/Music Mondays, Music

Thanks for this review. I got a free download of one of these tracks off iTunes, and it was pretty good. I too was surprised at the pairing initially, but Wynton loves blues, which appears to be the theme here.

Wynton's early albums are treasures of modern jazz, especially Wynton Marsalis, Think of One, and Black Codes (From the Underground).