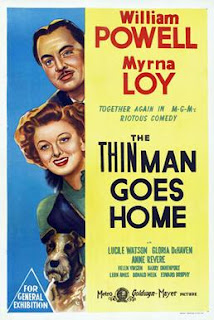 I guess the desire to uncover the backstory of fictional heroes isn't new.

Two things instantly jump out in the first three minutes of The Thin Man Goes Home (1945), the fifth Thin Man movie. One is Myrna Loy's clothes. In the previous four films, Nora is always dressed to the nines, but those pictures were all pre-war. Now that America is neck deep in World War II (this film was released in January 1945, the first movie in the franchise not to be released in the holiday season since The Thin Man), it seems Nora's attire reflects the mood of the nation. The train station in the opening scene also shows a few sailors and I'd be hard pressed to say if I saw any soldiers in the earlier films.

Oh, and William Powell literally pratfalls, twice. Is that a harbinger of things to come or is he drunk? Well, he's not drunk. The husband and wife are on the way to visit his parents and they don't like drinking. Nick's trying to get on the wagon--at least for this trip--another tip of the hat to wartime life: alcohol rationing. "A couple of weeks on this program and I'll be a new man," Nick says. "I rather liked the old one," Nora replies forlornly.

We meet Nick's mother and father, a doctor in Sycamore Springs. Nora and her mother-in-law talk about the difficulty between father and son and they pine for a chance to have Nick demonstrate just how good a detective he really is.

In one sequence, Nick is dressed in his old clothes and, for the first time in five movies, Nick looks like a wrinkled slob.

A half hour into the movie, we finally get some criminality. A guy and a gal are after a painting by a local artist, the latest of which Nora buys for Nick. That very night, a young man shows up at the Charles house. No sooner does Nick open the door than the man is shot dead. Peter Burton. On the surface, Nick's not involved, but he's got a nose for these things. He slips out of the house and beats the cops to Burton's hotel room. After switching the room numbers, he slips in, but not before we see a shadowed figure inside the room. By silhouette alone, it appears to be the town oddball, Mary. She promptly knocks Nick out.

There's a short monologue Nora gives to Asta in which she mimics Nick. After five films, it's pretty fun to see.

As Nick starts to ask around, some of the locals start to threaten Dr. Charles's dreams of a hospital in town. Nora suspects an old friend of Nick's as the culprit and follows him around town. Irritatingly, Nick still has the habit of ditching Nora. The detective asked Brogan to lead Nora on a wild goose chase. In the previous two films, Nora seemed like she was becoming more of a sleuth. In this sequence, she reverted back to being a comic sub-plot. She was approached by a man named Drake to buy the painting for $500, something that helps Nick with the case.

Still, she accompanies him on a few trails and to a couple scenes of crimes, more so than in previous films.

As is the pattern, Nick gathers all the characters into a room, this time Dr. Charles's laboratory. In yet another bit of meta commentary, Nora explains to her father-in-law how these things work, with the killer always cracking under pressure. For the first time, however, Nora admits she knows the bad guy so finally, she's in on Nick's sleuthing. Her running commentary to her father-in-law is kind of funny. I can't help but wonder if Loy asked for these changes.

The reveal was actually pretty good, especially considering the suspects were either friends of Dr. Charles or Nick himself. And, yeah, old man Charles is proud of his son so all's well.

Of the five Thin Man films to date, this one is the most staid. That's probably because of the setting but it also might be the era. This film was released just after America's fourth Christmas at war. There was likely a weariness in the audience and the filmmakers, but I'm going a bit farther than that.

Generally speaking, the Golden Age of Detective Fiction was between the world wars. After the second, crime and mystery fiction changed from the gentlemanly puzzle stories to the hard-edged tales to which veterans could relate. While the war isn't over yet with the fifth Thin Man film, you get the sense that World War II has changed the franchise. What was once a set of characters and situations designed to take Depression-era viewers away from everyday concerns almost feels frivolous in the middle of a world war. Sure, viewers in 1944 on the home front needed things to take their minds off the horrendous cost of defeating fascism, but there's a little bit of just going through the motions with The Thin Man Goes Home.

Nick and Nora certainly rattle off one-liners like in every other film, but the energy is not as high as the first four, especially the first two. Again, the on-screen chemistry between Powell and Loy is apparent (this is their 12th of 14 total films they made together) and even the trailer plays up this aspect. It is also the first Thin Man film not to be directed by W. S. Van Dyke, a director known as "One Take Woody" for his swift work ethic.

The Thin Man Goes Home isn't a bad film by any stretch. The final reveal when we learn what's going on is quite good and germane to the war. But this one just feels different. Now, I'm very interested to see the last Thin Man film, Song of the Thin Man (1947) and see what the post-war world does to detective fiction's First Couple.

Nora: It was the table you fixed. It fainted again.

Nick's Dad: You have my deepest sympathies.