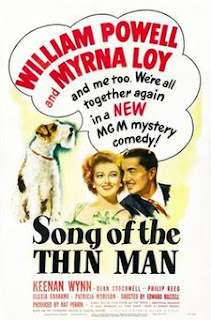 You know this movie might be different when Asta wasn't called out in the opening credits. Turns out, it was a return to form.

The film opens on the S.S. Fortune at a charity gala where a big band orchestra with a singer in entertaining the crowd. A couple of former hoods gives some running commentary, especially about the dames, and we get our introduction to Nick and Nora Charles in 1947. Nick gets the first line: "Boys, boys, in polite society, we don't say, Yoo-hoo. We say Yoo-whom."

I think it's safe to say that if you were to be shown stills of William Powell and Myrna Loy in these six Thin Man films, you'd be able to identify the film just by the hairstyle. Nick now wears his hair combed to the side with way less hair product. Nora's style is much more simple, similar to how she wore it in the fifth Thin Man movie, The Thin Man Goes Home (1945). But it's understandable. Not only are we in post-war America, but Powell is 56 and Loy 42. They are middle aged now and the times have changed.

It doesn't take long before we see some shady dealings. Band leader Tommy Drake is irritated with David Thayer, the charity sponsor, for low wages. Drake's got a new gig: he's going on tour where he can make more dough. The only problem is he owes gangster Al Amboy $12,000. When Amboy hears about Drake's plans, he demands the money right then.

Phil Brant, the owner of the gambling boat, is in love with Janet Thayer. They're ready to elope the next day considering her father, the sponsor of the event, doesn't like him. That's all well and good until they became the prime suspects in a murder investigation. Tommy Drake sneaks into Brant's office to break open the safe and abscond with the money. He is shot dead.

The next morning, we get our first glimpse of the domestic life of Nick and Nora and Nick Jr., played by Dean Stockwell. As a Generation X guy, I know him best from the TV show Quantum Leap and his roles in movies like The Player and Air Force One. Their New York apartment is just as swanky as you'd expect, but what's quite fun is seeing Nick and Nora now as parents.

What is also quite obvious is the witty dialogue is back after a one-movie hiatus. James O'Hanlon and Harry Crane are both credited with additional dialogue so I suspect director Edward Buzzell brought them in to spice up the old repartee. It shows and it's very welcome.

Nick starts sleuthing (without Nora!) and sneaks onto the gambling ship. He finds a piece of sheet music with a receipt from Amboy for the full amount. Our detective also meets clarinetist Clinker Krause who unknowingly has the sheet music in his clarinet case. Back to the dialogue, Clinker talks jive about the then-current jazz styles in such a way that befuddles the Depression-era Nick and Nora (who has now joined Nick). It's a funny ongoing bit, especially considering Nick and Nora probably frequented jazz joints in the 1920s.

Unfortunately, Clinker burns the sheet music so Nick has to solve the case without a crucial piece of evidence.

When Nick realizes a clue and decides to visit Janet Thayer at 4:00 am, a sleepy Nora says that, "We're in this together" and finally(!) Nick doesn't ditch her. Too bad it took until the last movie for this to happen. In fact, she even takes initiative and circles back to a rest home where our insane clarinetist, Buddy, is holed up. He confesses to killing Drake and even tries to shoot Nora.

One of the aspects of these Thin Man movies is that Nick and Nora rarely are threatened or in danger. However, with this last entry, there’s a sequence where young Nick Jr. is missing while the parents are away. All joking ceases as Nick and Nora worry until he is found and Nick learns the real reason.

If wouldn’t be a Thin Man movie without the final reveal, and this time, it’s back on the S.S. Fortune. It’s great seeing Nick and Nora comment on each of the suspects as they arrive and are seated. Again, Nora shines by noting something her husband missed: the necklace worn by the moll of Amboy matches the earrings of the lady with booking agent Mitchell Talbin. Nick then reckons the necklace was worth $12,000, the exact amount owed.

Teamwork. Man, if we had more of this earlier in the franchise. Frankly, it’s what I expected from the get-go. It’s how I remember the TV show Hart to Hart being and it’s certainly how Castle was in its run. Probably Remington Steele and Moonlighting, too, except those latter three all started with the romantic leads at odds with each other.

The final confrontation is rather violent for this series, another outcome from World War II.

I can’t help but suspect everyone involved knew going in this was likely going to be the final Thin Man film. Being the only one that didn’t make a profit probably sealed the deal.

Song of the Thin Man is the final Thin Man film and final film for which the pair starred together with equal billing. Loy evidently makes an uncredited appearance in Powell’s 1947 film The Senator was Indiscreet, making it their actual final film. I’ve been wanting to see this entire franchise for quite a long time and I’m glad to have finally done so. I thoroughly enjoyed every one of them, but if I’m being honest, the fifth film, The Thin Man Goes Home, was the weakest one for me. It seemed to have forgotten what made these films special, something the sixth film rectified.

Seeing each of these movies first thing every morning has been a treat, and I’m not shy to say I’d have enjoyed more if there had been more. The way Dean Stockwell portrayed Nick Jr. makes me wonder why no-one has every done a story with Nick Jr. as the detective. The stories almost write themselves.

And I’m curious why there hasn’t been another Thin Man movie made since. Johnny Depp was going to have a modern remake, but that project was cancelled. David Niven and Maggie Smith play Dick and Dora Charleston in the 1976 movie Murder by Death and that’ll be next on my list. I’ve mentioned Castle, Remington Steele, Moonlighting, and Hart to Hart as shows that have taken inspiration from Nick and Nora. Castle is one of my all-time favorite TV shows, but I’m going to go and find some Hart to Hart episodes somewhere. The recipe of a husband-and-wife detective team is too delicious to pass up. I do wish the Nora we saw in Song of the Thin Man had arrived sooner.

I enjoyed these films so much that I’m going to seek out and find the other films Powell and Loy starred in together. But only after watching the documentaries that were packaged with the DVD box set. I’ll review them next year.

Nick and Nora Charles. William Powell and Myrna Loy. Boy, they don’t make ‘em like that anymore, do they?

Nick: Who are they?
Nora: Just the people who invited us.

Nick: If this rampage of respectability persists, we're going to have to get you a bulletproof girdle.

Nora [commenting on Nick's swell attire]: You look just a page out of Esquire.
Nick Jr.: Not the page I saw.

Nick's neighbor [after hearing a gunshot]: Was anybody hurt?
Nick [commenting on the shattered bottle of scotch]: Yes, an old friend of mine went to pieces.

Nick Jr.[at 4 am] : How about a story.
Nick: Not tonight.
Nick Jr.: But your stories always put me to sleep.

Nick: Sometimes I amaze even myself. [And the Star Wars fan in me just then wondered if George Lucas was a fan of the Thin Man films and picked up this line for Han Solo.]

Nick [in the lead-up to the finale]: If this party gets rough, duck under the table.
Nora: I’m ready to do that now, although not the way I like.

at December 31, 2020
Email ThisBlogThis!Share to TwitterShare to FacebookShare to Pinterest
Labels: 1940s, Nick and Nora, The Thin Man, Traditional mysteries

McMillan and Wife (Rock Hudson and Susan St. James) were fun too.