When Cutting Up a Comic Book Was Charming

Recently I was reading through a comic published in 1976 and I was struck by something: DC Comics actively encouraged kids to destroy their comics.


To help celebrate the American Bicentennial summer, DC Comics published a total of 23 issues in June, July, and August 1976 with a special banner across the top that read “DC Comics Salutes the Bicentennial” in red, white, and blue. In the upper right corner was a number. Nice, huh?

Well, inside there’s a house ad. Here it is. 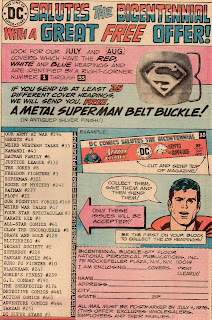 If you take a read, you’ll see that kids back then could get a free Superman belt buckle *if they cut out and sent in at least 25 cover headings*!

Yes, you would actually have to cut up the covers to 25 brand-new comics.

I did this sort of thing for Star Wars figures when I cut out and sent proofs of purchases to get my Boba Fett action figure. But those were cardboard boxes. 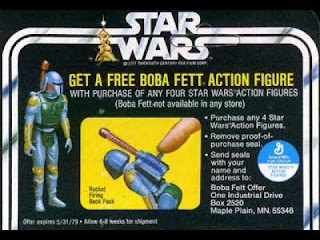 This situation was comic book covers. I’d like to think that, even then, I wouldn’t have done that. And even then, the comic book collector market was in full swing. Did they just not think comics from 1976 would be worth anything?


But here’s what I like about it now. I like the charm factor of it all. Over the decades, companies always had drives like this. “Eat 5 boxes of [insert cereal] and send in the box tops for [insert cool toy].” Yes, campaigns like this promoted binge buying, but it was actually kind of fun, no?

Do companies even do that anymore, or has our culture just moved on to kids simply asking parents to buy them whatever they want? Not sure, but at least by buying 25 DC Comics in the summer of ’76 or however many box tops of cereal, you felt like you were actually working for your prize.
at April 17, 2019
Email ThisBlogThis!Share to TwitterShare to FacebookShare to Pinterest
Labels: 1970s, Bronze Age, Comic books, DC Comics, Star Wars, Toys From Childhood