The Power of Shazam by Jerry Ordway 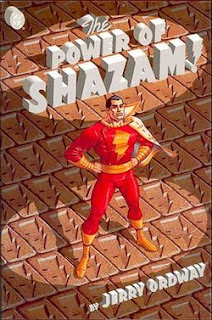 Yet Another Revision to the Origin


The original of Captain Marvel was pretty solid for a large chunk of the character's history up to the early 1950s when Fawcett Comics stopped publication. After DC Comics brought Shazam into the DC universe in 1973, the origin was unchanged. Roy Thomas revamped the origin a bit in 1987, but Jerry Ordway updated the origin again in 1994.

Here's the funny thing: In our modern world of comic book movies trying to live and breathe in the real world, Ordway manages to straddle both the expectations of contemporary 1990s comic readers without jettisoning the sense of wonder from the 1940s. That is to say, he gives some cool backstory to some of the Marvel tropes we know and love while presenting said tropes in a fresh, new way.


The story opens with archaeologists C.C. Batson and his wife, Marilyn, are exploring a heretofore hidden Egyptian temple. With them is Theo Adam. What's fascinating is C.C. looks like the future Captain Marvel so much that I had to double back and re-read the opening pages to verify it wasn't the actual Shazam outside his costume. Nope, it was Billy's dad. Already new stuff.

As you can imagine, when the trio uncover the secret tomb of Shazam, Adam gets a tad greedy. He steals a scarab from the crypt, kills C.C., then turns around and hunts down the wife. She's gone, too. Lastly, he kidnaps Billy's sister, Mary.


Billy's living on the streets of Fawcett City, a town that seems to draw its retro-future vibe from Batman: The Animated Series. You've got art deco buildings and cars seemingly from the 40s yet there's also a car with similar markings of a Ford Mustang. Either way, the city looks great in a timeless sort of way.

Hearkening back to the character's earliest days, Billy's earning meager wages selling papers. A stranger beckons him to follow him into the subway system. This, at least, is a consistent thread through all permutations of the Billy's origins. Surprisingly, the stranger, clad in trench coat and fedora pulled low on the forehead, looks an awfully lot like the deceased C. C.

In the magical caverns, Billy meets the aged wizard Shazam. We get a little backstory, filling in the  gap between his parents deaths and Billy's present living situation. Still, despite everything, Billy says the magic word and boom!

Captain Marvel's Still a Kid Inside


Like the current movie, when young Billy becomes the adult Captain Marvel, he's still got his kid brain inside. And he's really confused. He starts wrecking Shazam's cavern, attacking the old man as the wizard tries desperately to explain everything. He finally gets through, and we move onto the next act.

Sivanna as a Businessman


To jump to a different hero's story for a moment, when John Byrne revamped Superman's story and made Lex Luthor a businessman, it made perfect sense. Perhaps Ordway saw how well that worked for Superman and did the same for Sivanna. He's still the small, scrawny type, but he's like an evil Disney, wanting to use his money to put on a World's Fair. Naturally, we learn Theo Adam is on his bankroll, and, well, things don't go well from there.

A Smart Villain in Black Adam


When Shazam finally makes his appearance, Theo Adam recognizes him as C. C. Batson. And he puts two and two together, especially when he sees the big yellow lightening bolt on the uniform's chest. He returns to his lair and, wearing the scarab amulet stolen from Egypt, actually becomes Black Adam.

This is what I'm talking about when I say Ordway brings a modern sensibility to this story. In an actual 1940s comic, the villain would just be a villain. Here, Adam, an adult, figures things out. He's not just a bad guy trying to do bad guy things.


If you've seen the new movie, you realize the villain, Mark Strong's Sivanna, figures out Captain Marvel is really a child inside. He wants the power. Same here. But in 1994, Jerry Ordway did it first. And it's during this fight Billy finally realizes his true potential.

A Great Re-Introduction of Shazam to the DC Universe


In The Power of Shazam, Jerry Ordway gives a modern take on the origin of the first Captain Marvel. He brings modern sensibilities to the  storytelling while laying the groundwork for future stories. His art is, as always, instantly recognizable and gorgeous. He has a way of capturing the true emotions behind the characters at certain times. It can be sadness or, like this panel, remind you Billy is nothing more than a ten-year old kid. 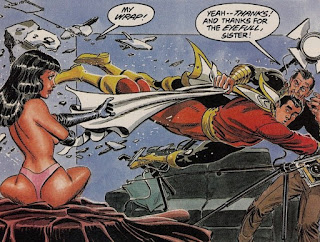 Plus, like the new movie, this story makes you feel like a kid again, with all the whiz-bang verve of a classic comic. As a historian, I also really dug all the nods to the original time period, including the movie serial. Captain Marvel is basically a pulp character come to glorious life in the pages of comic books. Look again at the cover. It's a pulp magazine painting. The interior title page also just rings with a 1940s vibe. It looks like it could have been the title card for the movie serial. 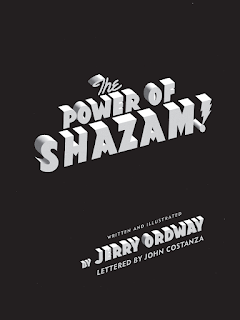 With Houston's Comicpalooza arriving in a month, I'll be on the lookout for issues of The Power of Shazam. My guess is I won't be the only one.


Not coincidentally (considering the big movie debuted), Jerry Ordway sat down with Ralph Garman on Garman's The Ralph Report this week. Garman and Ordway chatted not only about The Power of Shazam, but other milestones in comic book history in which Ordway played a role. Great peek behind the curtain with a legendary creator.

The Ralph Report is a subscription-based podcast about which I'll write a full-review in the near future. I listen every day on my commute home. It is a funny, acerbic view of entertainment news, complete with recurring bits. It's not your standard podcast. It's a show, with high production values, and constant interactions between the hosts and the listeners. The podcast is definitely adult in tone, but Ralph and Vice Host, Eddie Pence, deliver every episode with humor and heart.
at April 12, 2019
Email ThisBlogThis!Share to TwitterShare to FacebookShare to Pinterest
Labels: 1940s, 1990s, DC Comics, Jerry Ordway, Podcasts, Shazam