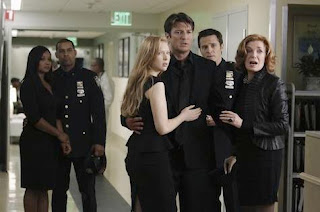 My recap and take on last night's Season 4 premiere of Castle is now live at Criminal Element. Head on over and have a read, see if you agree with me that the show about a writer who tags along with NYC homicide detectives just gets better and better.

(Now that it has been eight years since I wrote this, I'm cross-posting the text here, in case the Criminal Element link disappears.)

Last spring, when I wrote about the Season 3 finale of Castle, I spoke of Kate Beckett’s heart and how it is her journey that has the most traction in this series, that, from a certain point of view, the show about a writer who tags along with New York City detectives is really about a daughter who lost her mother in a murder. Little did we know that it would be Beckett’s literal heart that stopped because of a sniper’s bullet.

For those of y’all who might’ve forgotten how last season ended—as if!—Detective Kate Beckett (Stana Katic) had her life torn asunder. She lost her commanding officer, Roy Montgomery (Ruben Santiago-Hudson) as he gave his life to save hers. At Captain Montgomery’s memorial service, standing by her side as she spoke the eulogy, was Richard Castle (Nathan Fillion). He looked on with somber fortitude at the burden he saw Beckett carry, and saw the flash of a sniper’s scope mere seconds before a bullet tore through her body. He was too late to protect her. Castle cradled the wounded, bleeding Beckett and, fearing she’ll die without knowing the truth, professed his love for her.

Viewers were left with only one real question. No, it wasn’t “Would Beckett die?” C’mon. That was never in doubt. The question I’m talking about is this: Did she hear him say those words? Judging from the way Katic played the scene—with Beckett’s eyes glazing over—you just didn’t know.

The premiere last night, “Rise,” started where all good premieres start: minutes after the finale. I always wonder: do they film these scenes at the same time as the finale and just pray no one leaks images on the internet? Nonetheless, even though we know Beckett will survive, good editing tricks give us pause. Beckett’s gurney blasts through the door, her best friend and medical examiner, Lanie Parish (Tamala Jones), atop her, administering CPR. In what would prove the first of many great lines of the episode, Parish doesn’t move when the ER doctors tell her to get out of the way. “That’s my friend,” she cries. “Then let us save her life,” replies the doctor.

Naturally, all the cast members show up in the hallways, somehow bathed in the somber blue that coated the final scenes of last season. Detectives Javier Esposito (Jon Huertas) and Kevin Ryan (Seamus Dever), Beckett’s partners, are distraught, but angry. Castle’s daughter, Alexis (Molly Quinn) and mother, Martha (Susan Sullivan), are there, too. But it is Castle himself that carries this scene. Of all the attributes Fillion brings to a role, wearing his emotions on his sleeves is among my favorites. It’s rare to wonder where a Fillion character comes from because he lets you know, whether with an eye glance, a quirky smile, or grim frown. From a guy who is ruggedly handsome, the anguish, pain, and guilt on his face in the ER hallways was agony. In the most crucial moment of Castle’s life, something clicks. “This is my fault,” he says, realizing that his digging into the murder of Beckett’s mother way back in season 1 unearthed clues that propelled Beckett to this ER room. The doctors, including Kate’s boyfriend, Josh (Victor Webster), can’t seem to stop the bleeding. The thing is, Castle’s bleeding with Beckett. His heart is torn apart and the woman he loves is dying.

When you see the episode in full, and you see what Castle does at the end, you might start wondering if the entire series has changed. In the Twitter traffic last night, someone mentioned creator Andrew Marlowe’s reference to “moving the island,” a line from the ABC TV show, “Lost.” That is, just when you think you know everything, everything changes. It’ll be fun to watch the character progression.

Beckett lives and, after a few days, calls for Castle. For him, he wonders if she remembers his love profession and what it might mean for their relationship. With an armful of flowers, he walks into the hospital, checks his hair in a window—this is Richard Castle after all—and walks into Beckett’s room…to see her boyfriend, Josh. Awkward. Josh leaves, and we get the crux of the entire episode. “I don’t remember anything,” Beckett says, leaving an opening for Castle. “You don’t remember . . .” he says, pausing, at a loss for words—should he restate his love? What might she mean?—“. . . the gun shot?” Moment lost! “Some things are better not remembered,” she says. With his smirky smile back in place, Castle quips, “We’ll talk tomorrow.” Beckett slaps him down hard: “Mind if we don’t? I’ll call you.”

And, just like that, four months elapses. Beckett’s back in the precinct, Ryan and Esposito are scared of the new captain, and Castle’s nowhere to be found. Beckett hasn’t called our favorite writer, either. Enter Captain Victoria Gates, AKA “Iron Gates,” late of Internal Affairs, played by Penny Johnson Jerald. Now, I’m a fan of the TV show 24 and got to know Jerald for three seasons as Sherry Palmer. Man, was that character a self-motivated double-crosser, and Jerald was brilliant in her capacity for making viewers loathe Palmer. When I read that Jerald was stepping in as the new captain, I couldn’t wait to see the sparks fly. Jerald didn’t disappoint. Ryan and Esposito scurry like school children around her, fearing that she’ll bust them down to traffic. Beckett gets her introduction to Gates when the captain refuses to allow Beckett to carry her weapon without recertification. Beckett’s incredulous, but has little choice.

We find out at the same time as Beckett that Gates kicked Castle out of the squad room, but the writer found a potential new clue: a financial angle that might yield results to the conspiracy. Gates has closed the case and Ryan and Esposito can’t go any farther. Beckett is faced with only one choice: seek help from Castle. This she does and, after a brief little quarrel about not calling for four months, the two have their first genuine moment of the episode. Beckett opens up to Castle, letting him know that she built up a wall inside herself after her mother’s murder. “I won’t be able to have the kind of relationship that I want until the wall comes down. And that can’t happen until I put this thing to rest.” It’s a truly honest moment and Katic plays it perfectly, showing enough vulnerability to make us and Castle understand Beckett a little bit better, but still keeping things inside. This scene is also the pivot point of the episode, where it turns from the all-downer-all-the-time aspect to a somewhat typical murder-of-the-week story.

The current case, frankly, served only as a way to get “the team” back together again. It was a rather routine case with an interesting twist ending. Beckett, in her first case back, had to face a question: would she have the edge to draw on a suspect. In the first instance, she failed. The haunted look in her eyes said it all. Turn her attention back to her mother’s murder case, however, and you have a whole different ballgame. She does a verbal beat down to Rod Halston, the arson investigator who she thinks falsified a report of a warehouse fire years ago, the very warehouse that contained crucial leads she needs to continue the search for the man who put the hit on Mrs. Beckett.

Slowly, but surely, the murder case of Mrs. Beckett seeps into Castle’s pores, so much so that his daughter, Alexis, lashes out at him. “You’re a writer, Dad, not a cop. It’s time to grow up and stop pretending.” He also gets a call from Mr. Mystery Man, the person to whom Captain Montgomery mailed the evidence last season. Mystery Man gives Castle an ultimatum: get Beckett to stand down or else. No one else can get to Beckett the way Castle can, and it’s in this, another tender moment between the two, that Castle succeeds. He implores her to realize that she’s not “fine,” that she needs to take a breather. “We’ll find them [the ones in the conspiracy],” he tells her, “just not now.” “If I don’t do this, I don’t know who I am,” she replies. And here, in a nice touch from the Nikki Heat novels—very meta—Castle reminds her that she honors the victims of the homicides she investigates, that she’s the one with empathy for the victims because she, too, is one. That’s who Kate Beckett is. It informs her being, and it is grounded with Castle. Just like Captain Montgomery said last year to her, “You weren’t having any fun until Castle arrived.”

Dichotomies are fun in TV shows. After that previous touching scene, we get another, this time with Castle and Alexis. He apologizes to her, and she calls him on his feelings for Beckett.

“Does she make you happy?” Alexis asks.

That tender moment is crushed, however, as we see Castle go into his studio and pull up his own murder board with Beckett at the epicenter. Castle once accused Beckett of crawling up into her mother’s murder case and never emerging. I fear Castle’s about to do the same thing. It’ll be his secret for this season. The thing is, Beckett has one, too.

In the last scene, she’s talking with the police shrink, played by Michael Dorn (of Star Trek: The Next Generation). In a moment eerily similar to one played out in Star Trek after Captain Picard is rescued from his assimilation with the Borg, the psychiatrist asks Beckett how much she remembers. “Everything,” she replies.

Katic is simply brilliant in this scene. She plays Beckett broken, wounded, raw, and, for the first time that we’ve seen, without that wall inside her. When she utters that one word, with all it’s meanings, it leaves you breathless.

And then the promo for next week jars you back to reality. We all tune in to Castle for the fun, light, witty repartee between the two leads, the wonderful chemistry of the entire cast, and intricate murder-of-the-week stories. That is this show’s bread-and-butter and Marlowe and company won’t forget it. But it’s the rare program of this nature that can deliver such high drama and genuine emotional resonance as the twofer that was the finale and premiere. Castle is that wonderful show that is more than the sum of its parts. I’ll enjoy each and every episode—and the new Nikki Heat novel out today as well as the new Derek Storm graphic novel—as I have for three years. But I find myself looking forward to sweeps months when they will likely break out new, serious episodes. This cast and this writing team have delivered these types of episodes throughout the years, and they just get better and better.
at September 20, 2011
Email ThisBlogThis!Share to TwitterShare to FacebookShare to Pinterest
Labels: Castle, TV

Fine recap at Criminal Element, Mr Parker, though the storylines in CASTLE are predictable. As the seasons progressed I thought the series focused more on the subtle romantic chemistry between Castle and Beckett than on solving murder cases. An entertaining series all the same. Reminds me of the 80s detective series REMINGTON STEELE.